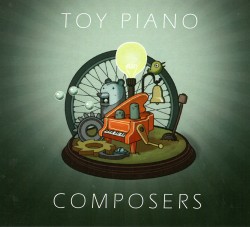 There can be few more reliable guarantees of contemporary music that is both thoughtful and entertaining than when the name Toy Piano Composers (TPC) appears on the tin. Founded by pianists and composers Monica Pearce and Chris Thornborrow, and now with a decade of growth in performance that has included over 120 new works in various formats from chamber and orchestral to operatic, TPC, fronted by its ensemble, has grown exponentially in performance and in creativity.

Fuelled as much by Reich, Riley, Glass and Pärt as by the unfettered creativity of young questing minds, the composers in the collective as well as its performing ensemble have continually pushed the proverbial envelope and the ceaselessly receding horizon, with music that has swelled with classical elegance and avant-garde subversion. This album – simply bearing the collective’s name – appears to be the first by a group that has focused so far solely on performance.

In keeping with the mission to create something new and remain in the continuum of the classical tradition, these seven works, written by various composers from 2010 to 2014, are performed by the TPC Ensemble, a group of nine instruments of contrasting character. Together they are famously at ease with the most testing new music for traditional acoustic instruments plus toy piano. From Clangor (Pearce) to Hermes’ Lure (Ruth Guechtal) and Modus Operandi (Nancy Tam), the TCP Ensemble may seem stretched to the limit but are equal to the challenge.