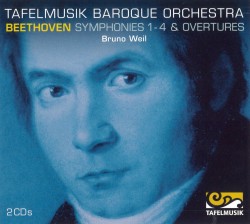 Toronto’s Tafelmusik ensemble is nearing completion of their long-term Beethoven Symphony Project with this release of the first four symphonies of Beethoven on their own independent label, with only the Ninth yet to appear on disc. Tafelmusik, nominally considered a Baroque ensemble, is here expanded to roughly 40 players with a larger string section, though this added strength is attenuated by the use of gut strings and the total suppression of vibrato. Bruno Weil, a longtime collaborator with the orchestra, draws a finely articulated and transparent response from the rarely seen Tafelmusik podium.

The performances of the first two symphonies (programmed on separate discs), though rich in detail, seem to take their time to fully blossom. Surprisingly, the strikingly subversive series of dominant chords that launches the First Symphony are tossed off quite nonchalantly, though it gradually becomes evident that Weil is a master of the slow burn. The subsequent Andante movements of both works, though fleetly paced in accordance with Beethoven’s after-the-fact metronome marks, in my opinion have a tediously conventional character that is difficult for any conductor to overcome. All is put right however with a pair of powerful and scintillating finales.

The renderings of the Third and Fourth Symphonies can be recommended without qualification; both are superb throughout. The Third in particular (previously paired with Mendelssohn’s Fourth Symphony in an earlier release) has a rare sense of urgency and spontaneity and offers many outstanding solo contributions; I was particularly enchanted by the deliciously tangy pair of oboes and the brassy stopped tones of the three horn players.

The two-disc set is flanked by two overtures, opening with the Prometheus Overture and ending with a commanding performance of the Coriolanus Overture. These live performances were recorded in Toronto’s Koerner Hall in 2012 and 2013 with exceptional clarity yet with nary a peep to be heard from the audience.