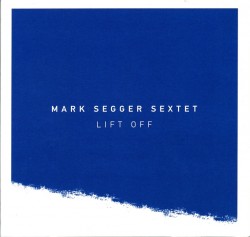 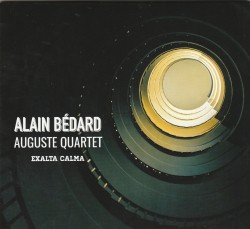 Gifted Quebecois jazz bassist, composer and president of the forward-thinking Effendi Records, Alain Bédard, has just released the latest project from his Auguste Quartet, which features the equally gifted Félix Stüssi on piano, Mario Allard on soprano and alto saxophones and the facile Michel Lambert on drums. The majority of the intriguing compositions here have been penned by Bédard, with two fine contributions from Stüssi (the evocative Debout au bout du Bout-du-Bank and Insomnia), as well as one gem from J.P. Viret (NY – Pas encore).

The opener, PouTiti, begins with a subtle Afro-Creole beat that underscores the quirky melody, with delightful and melodic soprano sax contributions from Allard. Bédard establishes the steady pulse with his undulating bass lines, while Lambert develops an intricate second-line-inspired framework, and on La Silva Major ll, Bédard’s nimble bass exploration leads the way into an exotic, sonic journey.

On Stüssi’s Debout au Bout du Bout-du-Bank, a unison piano/sax intro segues into a groovy, boppish construct, written to delight the ear and stimulate the imagination. A standout is Queen Ketchup, where a concentric swing propels the players into a symbiotic dance that fully illustrates not only the ego-less democracy of this ensemble, but their ability to communicate almost telepathically. An inspired bass solo punctuates the piece brilliantly. The closer, Insomnia, is the perfect postscript to a thoroughly gorgeous, well-recorded, conceived and performed contemporary jazz recording. With an almost futuristic West Coast Jazz feel, this final track again displays the wide skills of all of the players, captured in the act of creation. Vive Montréal! Vive Québec! 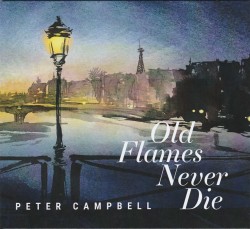 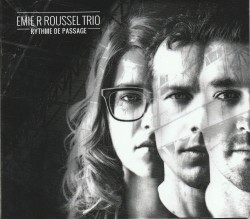 In traditional larger ensembles the piano, bass and drums feature in what is referred to as the “rhythm section.” Famous trios from Nat Cole to Art Tatum, Paul Bley, Bill Evans, Keith Jarrett and others changed all that. With more adventurous exploration of the instruments, trio music has evolved enormously. Singularity of sound, however, has often remained elusive. Not so with the trio of Emie Rioux-Roussel (piano), Nicolas Bédard (bass) and Dominic Cloutier (drums).

Rioux-Roussel’s music is born of a fluid relationship between written material and improvisation and dwells in the delicate balance of European and American jazz. Rythme de Passage celebrates a decade of such musical collaboration; its repertoire clearly establishes how the relationship between each musician has evolved from being one in which the fire and brimstone of youth has paved the way for the well-honed values of experience. This is brilliantly caught in the sumptuous music of this record.

This trio music glows in its unique lithe elegance, its warmth and poetic joyousness; the tantalizing symmetry of melody and harmony. A musical adventure which sets off in unexpected directions and always swings exactly right with its own fascinating rhythm. 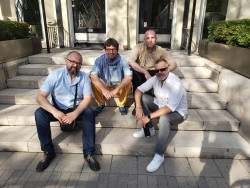 Four musicians – clarinetist François Houle, alto saxophonist Nicola Fazzini, bass guitarist Alessandro Fedrigo and drummer Nick Fraser – have managed to create music exactly as promised: that is, a Vortex of sound. Vortices are formed – in the physics of fluid dynamics – by stirring fluids or gasses into whirlpools, smoke rings, tornadoes and dust devils. And while a turbulent artistry might characterize the curl of the flow velocity of this music, perhaps in the opening bars of Sketch 26, the most mesmeric musical vectoring shows up as the music progresses into Saturno and beyond.

In later repertoire such as Chorale and Calanques, for instance, we discern a degree of artistry that is highly commendable. There are displays of controlled instrumental pyrotechnics. These have a direct bearing on the resulting music, which is always rigorous and driven by architectural acuity. Houle, Fazzini, Fedrigo and Fraser, all ooze impetuosity and their performances are full of vitality especially on ‘Nette, a boppish song with diabolical harmonic inversions. The musicians may not play together often, as they are located in disparate places, yet they parlay with the familiarity of old friends.

Nothing is forced or exaggerated, an error often observed in consciously experimental music. Tempos, ensemble and balance – all seem effortlessly and intuitively right. There is much sensitive give and take between the four instruments, much intimacy and subtle variation of momentum, colour and feeling. In sum, this music suggests uncommon gem-like craftsmanship. 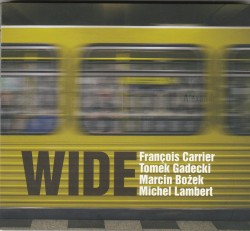 When opening the CD case containing my copy of Wide for the first time, a piece of what I assumed to be packaging dropped out. Upon further inspection, this hand-ripped offering was not wrapping (though it resembles part of an envelope), rather it was a sort of calling card for ColyaKooMusic, the co-production and publishing outfit François Carrier created in 1994. This well-designed paper, with its quirky and compelling hand-stamped insignia, is a harbinger of what’s to come on the rest of the album.

Before my first listen, I was next intrigued by the disc being over 64 minutes long and containing just three tracks. This may be alarming to a listener expecting a bevy of jazz standards or bite-sized original compositions, but anyone familiar with the playing of Carrier and Michel Lambert, or their Polish bandmates Tomek Gadecki and Marcin Bozek, will know to expect bold and spontaneous improvisation. The album does not disappoint!

During this COVID-19 pandemic I am self-isolating with my mother, who was quick to raise an eyebrow when I first played the disc. Her response is not an unsurprising one, given the dense and at times chaotic improvising one hears frequently throughout the album, but it is upon listening to this recording as a whole that one notices the sensitive arcs these masterful musicians are able to create while improvising freely. 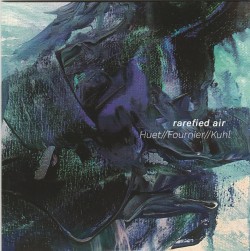 This month, my assignments included two discs of freely improvised music, which are at the same time the simplest and most difficult to review. In one way it becomes all about the vibe of the recordings, and in another there are no traditional compositions/tracks/solos to discuss in a more formal manner. The review of Wide dealt with an offering that was recorded live and fit more into the free-jazz realm we associate with the likes of Ornette Coleman and Eric Dolphy, whereas this disc is far more ambient, in one way smoother to listen to, and in another more subdued and introspective.

Edwin Huet, Alex Fournier and Mike Kuhl have collaborated on Rarefied Air which consists of four freely improvised tracks involving double bass, drums and electronics. Fournier, who has for years been a mainstay on the free-jazz scene in Toronto, brings his usual mix of stoic restraint and instrumental proficiency to the table. Huet and Kuhl hail from the Baltimore area, and are both known for their expertise in freely improvised music and a variety of other styles. Kuhl’s drumming is exciting and uplifting, while Huet’s use of electronics gives the recording a unified, produced sound. We are living in odd and unprecedented times, but avant-garde recordings like Rarefied Air now provide a thought-provoking and welcome release from the strangeness of this era.