Derided in the past as effete or derivative, chamber-style improvising has fascinated musicians since at least the 1920s, both on the jazz (Benny Goodman, Red Norvo) and classical (George Gershwin, Ferde Grofé) sides. However, as this group of CDs demonstrates, with contemporary musicians conversant with both strains of sound, the transitional awkwardness of the past has been replaced by inspired flexibility. 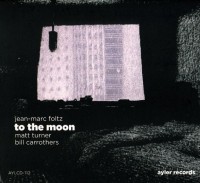 Take for instance, Jean-Marc Foltz’s To The Moon (Ayler Records AYLCD-112 www.ayler.com). Although at first it seems as if the ten sparkling miniatures performed by the French clarinettist and his American sidemen pianist Bill Carrothers and cellist Matt Turner, are high-gloss examples of composed music, careful investigation reveals just the opposite. All of these instant compositions were improvised by the trio in one studio session. Inspiration came partially from the tale that inspired Schoenberg’s Pierrot Lunaire plus the wintery moonlight of the studio setting. The result is atmospheric and elegiac in equal doses. Often showcased are the chalumeau textures of Foltz’s bass clarinet which soar and buzz as they contrapuntally meet up with doleful cello slides and strummed metronomic passages from the piano. As improvisers, the three expose a subversive post-modernity as well. Crosses, for instance begins with Carrothers recital-styled harmonies melding with vibrated slides from Turner. Yet while the broken octave-style theme is played by an unperturbed pianist, Foltz constantly interrupts with twittering atonal chirps from the highest regions of his clarinet. The pianist’s reflective thumps which shake his instrument’s inner metal, wood and strings perform a similar function on Knitting Needles. Elsewhere the cello’s quivering vibrations and low frequency organic patterning from the piano are often only there to sooth Foltz’s more intense flutter tonguing. 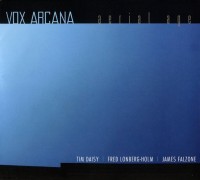 Comfortably probing this third stream is Vox Arcana, a similarly constituted trio with Tim Daisy’s percussion and marimba, clarinettist James Falzone and Fred Lonberg-Holm’s cello and electronics on Aerial Age (Allos Documents 004 www.allosmusica.org). Daisy’s eight compositions equally reference minimalism, the so-called New York school as well as the improvisation which permeates the music of the trio’s home town Chicago. Throughout, the instrumental tones often hocket and undulate in triple or double counterpoint. Perfectly illustrating this cohesion is Falling. After the tutti exposition splinters into episodes of reed-biting intensity, driven by the drummer’s pumps and rebounds, Lonberg-Holm lets loose. Doubled sul ponticello runs are extended almost infinitely without breaking the glissandi, and only gradually superseded by single-note reed twitters. Reverberating kettle-drum-like pops set up a final variant of plucked cello and melodic mid-range clarinet whistles. Another example of this skill occurs on Chi Harp Call in E. While no one could mistake Falzone’s coloratura trills or Daisy’s popping marimba rolls for the harmonica-led blues the tune salutes, the cellist’s scraping his strings into an agitated polyphonic mass easily equals timbres produced by blues guitarists. Still, the roiling marimba strokes and liquid clarinet asides link the melody to the ongoing European sound tradition. 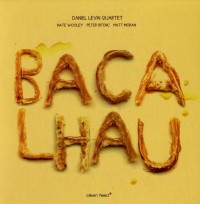 Strings and percussion – with the leader’s cello and vibraphone played by Matt Moran – are also featured on the Daniel Levin Quartet’s Bacalhau (Clean Freed CF 195 CD www.cleanfeed-records.com). But Peter Bitenc’s bass is added and the horn is Nate Wooley’s trumpet. Paradoxically a full-time bassist makes this the most “jazzy” of these sessions. It also means that on a piece such as Bronx #3, when agitato bass lines combine with the trumpet’s sputtering triplets, the subsequent contrapuntal framing gives Levin a staccato forum to practically duet with himself. More impressive still is the epic Soul Retrieval, which evolves in several distinct sections. Initially a mid-tempo mix of brassy trumpet and mournful cello, a mid-section expansion of sul tasto bass work and downward string slides moves the trumpeter towards an interlude of tongue-stopping intensity. Chiming vibraphone pulses then collide with intense, discordant bowing from both string players, only to have the theme re-developed with broken-octave concordance by the end. 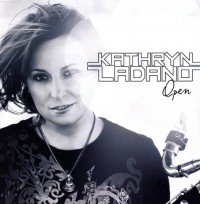 Not all this chamber improv comes from jazzers however, as bass clarinettist Kathryn Ladano demonstrates with Open (www.kathrynladano.com). Classically trained and co-founder of the Kitchener-Waterloo Improvisers Collective, Ladano mixes solo and group pieces; notated music with improv. Her swelling glissandi, harsh flutter tonguing and aleatoric trills give her work a definite identity. While an episode of broken chord variants that matches her breathy echoes with ringing vibraphone tones is particularly noteworthy, elsewhere her repetitive trills, which confirm impressive reed control, are needed to modulate feverish interface from some of the other players. Overall, multiphonic inventions on composed material may be her strongest attribute.

Singly and together, the CDs confirm that persuasive improvisation can result without being fortissimo or frantic.