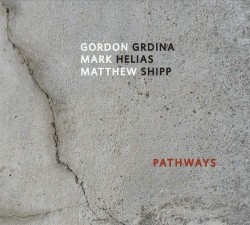 Gordon Grdina, Mark Helias and Matthew Shipp have sculpted what can be described as a sound network. All their lines intersect, interlace and interpolate into each other, as if making a coordinated attempt to weave an airtight sonic fabric in real time. The improvisational passages constantly ramp up the character of tension, but this effect is achieved with density before volume. None of the songs start with an easily identifiable rhythmic cell per se, but the pieces still manage to gradually crank up the intricacy dial, until the listener can’t help but marvel at all the dizzying syncopated architecture.

Along with the album’s unceasing subversion of pace, an astonishing equilibrium of creative input is maintained. If one were to isolate any 30-second segment at random, it would take much deliberation before they identified a bandleader. Therein lies the beauty: there isn’t one. Doing research beyond the surface, this was released through Grdina’s label, and Grdina is on production duty. However, remove Matthew Shipp’s piano wizardry from the equation and the music loses most of its dynamic range. If Mark Helias wasn’t present, the music would lose its underlying pulse and percussive edge. All the compositions are co-written by the trio, and the sum is informed by its parts. Helias moves when Grdina does, who waits for Shipp’s cue, who anticipates Helias’ whims long before they exist. Pathways is the epitome of impromptu alchemy.