Almost from the time when so-called classical music was first recorded, inventive musicians have figured out ways to alter the scores in some way for novelty, commerce or homage. The most sincere of these trends began in the 1950s as creative musicians began interpolating improvisations into what had been treated as immutable musical doctrines since High Culture codification began in the late 19th century. This sonic refashioning continues, with the discs here demonstrating different approaches to the revisions. 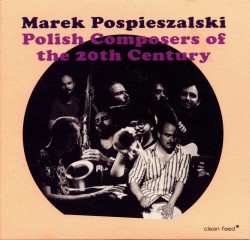 Outlier of the group is the octet led by Polish woodwind player Marek Pospieszalski on Polish Composers of the 20th Century (Clean Feed CF 585 CD cleanfeed-records.com). Rather than recasting any of the classical canon’s greatest hits by great composers on this two-CD set, Pospieszalski, two other horn players, three string players, a pianist and a percussionist plus the use of tape and a soundboard, produce variations on a dozen themes by contemporary Polish composers. Titled with the composers’ last names, most of which are little known outside their home country, the tunes are given additional resonance as jazz, noise and electronic tropes are worked into the performances. Staying true to the music’s genesis though, references are always made to the initial theme. Each track is, above all, an orchestral work, since there are few solos, and no protracted ones, with each performance arranged as primarily group work. What that means, for instance, is that while a piece like Stachowski may be broken up with effects pedal rock-like flanges from guitarist Szymon Mika and metallic percussion from drummer Qba Janicki, the track’s essence is a horizontal flow that becomes more concentrated as it evolves. Similarly, Kotoński may be briefly segmented by Tomasz Dąbrowski’s mewling trumpet breaths, Piotr Chęcki’s pinched vibrations and Pospieszalski’s flat-line clarinet buzz, but the equivalent of a military-style march projected by the drummer and bassist Max Mucha also suffuse the track. True to Poland’s Slavic folk heritage as well, tracks such as Szalonek and Rudziński include some joyous, terpsichorean moments. The first bounces along with drum clanks and hard percussion pummels while climbing to an explosion of vamping-horn multiphonics and harmonies. Meanwhile, the second uses horn slurs, Mucha’s clipping-nerve beats and pianist Grzegorz Tarwid’s jumpy keyboard pressure to replicate Eastern European free-style enthusiasm. Overall though, the paramount impression left by the 12 performances is how both discipline and dexterity have united into an ingenious salute to contemporary Polish composers, which also stands on its own as a musical statement. 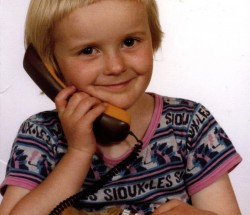 The same concept applies to Danses (Microcidi 027 circum-disc.com) by the French Otto duo of electric guitarist Ivann Cruz and drummer Frédéric L’Homme. Transforming 13 Bach compositions for lute and cello, the two invest the suite with a modern sensibility without overdoing things. So while some of the gigue interpretations would seem more appropriate to pogoing than courtly dancing, the basic lyrical form is maintained. Gigue, Suite n°2 BWV 997 encapsulates what the two do in miniature. Beginning with rugged rat-tat-tats from the drummer and a low-pitched bass-string thump that moves towards Memphis funk, the familiar lyrical melody soon replaces the track inception so that the piece sways back and forth between both sonic strands to the expected ending. Later transformations are signalled on Prélude, Suite n°2 BWV 997, the first track, as L’Homme’s two-beat cowbell ringing pulse would be more common in a Dixieland club than a Baroque-era church and Cruz’s fleet pinpointed swinging references confirm the impression. Throughout the guitarist’s stylings encompass not only jazz but country picking (Allemande, Suite n°1 BWV 996) and even flirt with punk rock (Allemande, Suite pour violoncelle n°2 BWV 1008), as rugged percussion asides or straight-on drum pressure adds to the fluid expressiveness. The duo though, is also canny enough not to override the melodic core of Bach’s work. So, while a tune like Prélude & Allemande, Suite pour violoncelle n°3 BWV 1009 allows the drummer to expose his inner Neil Peart with busy, connective ruffs and bottom clanks and the guitarist to seed the track with a shower of high-power buzzes and flanges, the collective slides and echoes may be more aggressive but no more discordant than the original. Letting themselves go, Chaconne, Partita n°2 BWV 1004 is extended to 13-plus minutes, with the interpretation as intensified as it is concentrated. Throughout, lighter string frails, subdued percussion crackles, reverb challenge for supremacy, molasses-thick string chording and borne-down drum bangs and ruffs, it’s this tension which defines the challenge met and satisfies by giving way to folksy reverberations by the end. 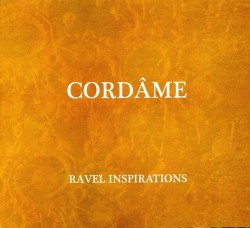 Moving from the music of a composer who died in 1750 to one who was around until 1937, are compositions partly based on Maurice Ravel themes played by Montreal’s Cordâme sextet on Ravel Inspirations (Malasarts mam 048 cordame.bandcamp.com/album/ravel-inspirations). Mature in his own writing, leader/bassist Jean Félix Mailloux alternates tracks directly influenced by the French composer and those wholly his own. The group’s treatment of Boléro demonstrates how these transformations evolve. With the familiar theme first stated by harpist Éveline Grégoire-Rousseau, it’s taken up by violinist Marie Neige Lavigne and then harmonized with supple modulations from pianist Guillaume Martineau. As harp glissandi and Sheila Hannigan’s cello sweeps embellish the exposition, Mailloux’s bass and Mark Nelson’s percussion create a rhythmic bottom. When Martineau pulses a bluesy interlude within the theme, massed and discordant string plunks add to its fragmentation, but by the end it’s reconstituted with sympathetic harp strums. Group harmonies keep the narrative linear during other glimpses into the Impressionist’s canon such as Pavane pour une infante défunte at the same time as stop-time string strokes and piano-created note swells build up excitement. That done, piled on textures from harp, cello and violin calm the performance so that it finally relaxes during the concluding integrated sequence. Other tracks may sound a bit too formal until they’re suffused by the warmth of tincture additions in Mailloux’s arrangements. Meanwhile Cordâme originals are characterized by more overt modernism in the arrangement and performances. Horizontal bow sweeps and clock-like drum ticking give way to violin triple stopping and continuous harp patterns on La bardane; while tough and heavier sound coordination among band members sutures the rubato sections of Océanos, which, besides staccato string stings, feature a rugged drum solo and a near-foot-tapping groove. Drum rumbles and pops also characterize what may be the preeminent composition Kenny Wheeler, named for another Canadian musical innovator. By cannily contrasting undulating motifs from the strings which attain smoothness without sweetness and rhythm section power, Mailloux realizes the same sort of half-Impressionist, half-intense composition, that is not unlike Wheeler’s memorable work. 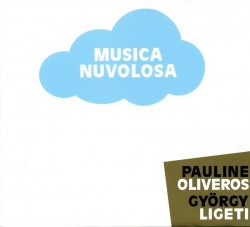 Coming from the so-called other side of the musical world is France’s Ensemble 0 whose Musica Nuvolosa: Pauline Oliveros/György Ligeti (Sub Rosa SR 528 ensemble0.com) provides an intriguing object lesson in the present day state of the improvised/notated divide. The eight-member ensemble consisting of two woodwind players, three string players, two percussionists and a pianist specialize in contemporary repertoire, usually by living composers. Unfortunately this isn’t the case here, but the adaptations of Horse Sings From Cloud (1975) by Oliveros (1932-2016) and the 11-part Musica Ricercata (1951-53) by Ligeti (1923-2006) are equally instructive. Oliveros, who had a long association with improvisers such as Joe McPhee and Joëlle Léandre, composed a 20-minute piece that, while minimalist, is less than doctrinaire and has enough chance elements to alter each performance. Encompassing an underlying string drone, the repetitive theme adds more instrumental colour and timbral extensions as it evolves, but stays true to gradual dynamics. Besides sweeping tremolo chords, Júlia Gállego Ronda’s flute overlay and Melaine Dalibert’s insistent piano clinks help characterize the evolution. A different matter, Musica Ricercata draws on Ligeti’s Austro-Hungarian background as well as more modern currents. Moving through sections of melancholy and light-heartedness it never stays long enough in either mode to define an overriding emotion. Still, while the downcast sections are slower moving and include taut bell-tolling inferences, they never become tearful. Meanwhile the speedier pieces not only resemble Magyar music, but are often foot-tapping enough to pass unnoticed in a swing band. There are even points where the piano strays close to boogie-woogie chording, the flute stops aim for rhythmic bites and violinist Tomoko Katsura could be playing at a hoedown. Furthermore with percussionists Aurélien Hadyniak and Stéphane Garin creating textures from vibraphone, glockenspiel, piccolo snare drum, small triangle, gong, marimba, xylophone, tubular bells and tam-tam, the rhythmic underpinning sometimes sounds like the beat-affiliated orchestrations and arrangements that Ferde Grofé and his imitators made for large early so-called jazz orchestras like Paul Whiteman’s.

Improvised and notated music appear to be drawing closer during every decade. These albums demonstrate some of the results of this situation.