Despite its infrequent celebration in a few pop songs and prominence as a funk band groove maker, the double bass in both acoustic and electric configurations doesn’t get much respect. Usually relegated to brief solos, its movement to the forefront has only been accepted and confirmed with the loosening of rules in creative music. Also, because free music has no instrumental hierarchy, the shibboleth as to which instruments constitute a duo is jettisoned, as the following bass-affiliated sessions demonstrate. 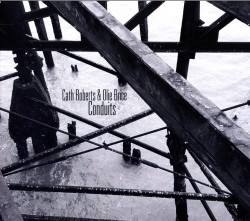 Working up from the expected lower parts of the scale on Conduits (Relative Pitch Records RPR 1135 relativepitchrecords.com) are baritone saxophonist Cath Roberts and double bassist Olie Brice from the United Kingdom. Although capable of projecting the subterranean textures associated with their instruments as they do at times during the three extended tracks here, wide-ranging timbral preference is also on tap. Screechy timbres, spetrofluctuation, tongue slapping, reed bites and thick vibrations from the saxophonist are complemented, confronted or stabilized by the bassist playing arco or pizzicato. Peering is the most realized instance of this. Opening with Roberts propelling harsh shakes down the scale to wallowing lows, Brice’s arco concordance switches to harsh col legno slaps as a sweeping response to her sudden leaps to altissimo peeping. Additional reed snarls and snorts are shaped with spiccato string pressure, culminating in responsive duo sequences as the finale. Brice’s echoing string plucks, alternating with arco asides, are more prominent elsewhere. Yet whether the sequences evolve lento or presto, high-pitched or low, with multiphonics or in carefully thought-out single notes, warm bass strums confirm the partnership and each tune’s linear movement. Although it isn’t apparent, because of COVID restrictions, the disc was created during one session in real time over the Internet. Despite being confined in different places, each player responds adroitly to the other’s improvisations. 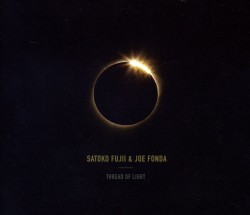 A variation of that inventive COVID-created situation with a more common bass duo configuration is Thread of Light (Fundacja Sluchaj FSR 02/2022 fsrecords.net). Pianist Satoko Fujii recorded melodies and improvisations at home in Kobe then forwarded ten sound files to bassist Joe Fonda in New York. After studying them during several weeks of careful listening, Fonda ingeniously improvised the bass parts. Rather than decoration however, they come across as unified and purposeful, like a carefully conceived addition to an already existing edifice. If you didn’t know the scenario, there are tracks which suggest Fujii is following Fonda’s lead. This occurs on tunes such as My Song and the concluding Between Blue Sky and Cold Water. The former is introduced by bass reverberations that echo down the scale and end with distinct string thumps as distant tones are shaken from the piano’s sound board. Fujii’s piano-key stopping and string rattles evolve beneath the bassist’s elaboration of a straight-ahead melody on the final track, culminating in a Romantic-styled duet with guitar-like strokes from Fonda and keyboard dusting from Fujii. When she moves to the bass clef the connection is cemented. Playing flute on Wind Sound, Fonda again states the theme, while his double-tongued arabesques lean into the pianist’s high-pitched soundboard vibrations. Finale is a dual atmospheric drone. All through the disc the two project faultless dialogues, with lightning quick interaction as if they were playing side by side. Fujii’s hesitant comping or swirling glissandi bring forth the appropriate plucks and strokes from Fonda’s string set, whether culminating in processional near-stasis or sparkling motif jumps. So close is their processed interaction that it’s never clear whether the string echoes which begin the lengthy Reflection are from bass or piano. Fonda’s dark-power plucks and Fujii’s keyboard clicks make identities clearer during subsequent horizontal variations on the theme until woody piano pressure and arco bass buzzes bring the two together again. 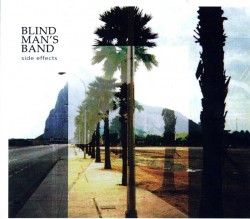 Although also created during a COVID lockdown, Side Effects (Nische NIS 221 blindmansband.bandcamp.com/album/side-effects) was recorded in a Copenhagen studio by Blind Man’s Band’s members electric bassist Claus Poulsen and pianist Christian Rønn both on site. Committed to sound turbulence as well as spatial improvisations, many of the 11 brief tracks resemble a traffic jam during rush hour, with droning engine-like conveyance from Poulsen while Rønn crams multiple notes into the exposition as he jockeys from one position to another. When the bassist adds Dictaphone crackles and string thumps to What curve?, his vibrations fill the between-the-keys spaces left by the pianist. Not that there are many, since Rønn sounds clank from the keyboard at the same time as he presses the pedals to expose the instrument’s lowest tonal range. Other tracks such as Chocolate machinegun evolve with measured bass rumbles joining widening dynamic patterning from the pianist, while those like Pink fairies use rapid fingering from both players to suggest the bouncy airiness of those mythical creatures. Still, dynamic concordance is the preferred musical output. This ability to project unexpected improvisation tropes, while not letting pressurized counterpoint degenerate into density for its own sake, is demonstrated on the connected Follow and Free fall. Evolving at first lento and warm with the pianist’s open chording emphasizing high- and low-pitched fills, Poulsen’s chunky string slaps on the second selection move from tandem comping to create a secondary theme that develops in double counterpoint complementing the first one. 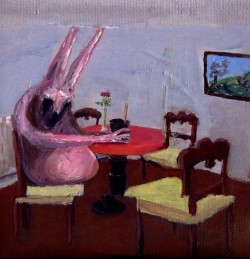 Moving slightly eastward to Stockholm, The Great Escape Plan (Tilting Converter tiltingconverter.bandcamp.com) offers two matched improvisations by bassist Joe Williamson, a Vancouverite relocated to Sweden, and local drummer Dennis Egberth. Together and singly, both are members of various groups. Bass and drums make up a standard rhythm section for most bands, but on their own Williamson and Egberth transform the configuration so that the emphasis is on narratives and reaction to reductionist sounds, not cadences. As bass string thrusts and swells and percussion clanks and strokes personify the program, both players convey dissonant and melodic concepts, rather than concentrated pulses. Often there’s role reversal as when the bassist’s col legno string crashes are more percussive than the drummer’s slim paradiddles. Throughout both tracks a thin squeezed tone is frequently upfront. But whether it results from Egberth’s rapid scratch across a cymbal or Williamson using his bow to lacerate the strings at the bass’ highest point is never made clear. On the concluding Plan B – the first track is also prosaically titled Plan A – as interaction becomes more intense as the tempo shifts from andante to presto, the bass part becomes a multi-string drone and drum-top claps turn to an unvarying shuffle. Attaining a variant of the phrasing that began the disc, the two typify bass-drum timbral extensions and rhythmic consistency at the same time. 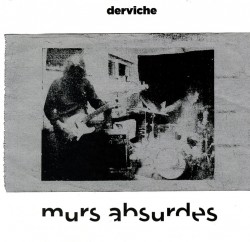 A modification of this configuration is expressed on Murs Absurdes (Ayler AylCD-172  ayler.com), by the French duo Derviche. But with Eric Brochard pushing his electric bass parts more aggressively than other users of the same instrument like Blind Man’s Band’s Poulsen, and Fabrice Favriou pummeling his drum kit, echoes of Black Metal infuse the sound layers which make up the six-track suite. Creating the sonic equivalent of brutalist architecture, the two drag out each sequence. The combination of the bassist’s thickened-down strokes and the drummer’s repetitive patterns constructs narratives, so thick and concentrated that they’re almost opaque. Still, as the sounds segue from largo to andante and finally  to prestissimo tempos, the bass string masonry that makes up this wall of sound can be sensed as pedal movement slightly alters Brochard’s output. By the penultimate Sequence IX, despite perceived heaviness, the two break up the exposition with more graduated sounds that mix improvisational motifs within the theme based around Favriou’s foot-pounding ruffs and rebounds. Interrupting the concluding Sequence X with a space-making buzz, Derviche returns to hearty percussion smacks and rugged string drones at the finale, while referencing improvisational movements.

Despite these sessions’ common denominator of including the double bass in its acoustic or electric form, varied textures and techniques expressed by these inventive players mean that no one duo sounds remotely like another. 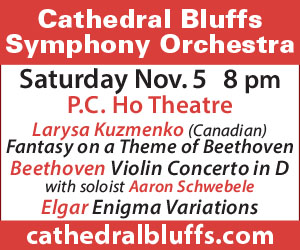