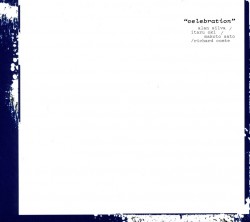 A bittersweet celebration; while this 2019 Paris concert honoured the 80th birthday of U.S. expatriate keyboardist Alan Silva, it was also the final recording for Japanese trumpeter Itaru Oki (1941-2020), who, like Silva, was a longtime member of the Gallic creative music scene. During this three-part free improvisation, Silva uses the smears, swells and echoes from his keyboard to accompany Oki’s sophisticated command of his brass instrument that ranges from strained high pitches to half-valve guttural effects, all the while preserving the tune’s melodic kernel. Percussionist Makoto Sato, another Japanese expat, adds unobtrusive clip-clop accents to the action, while French guitarist Richard Comte strums connective lines for all, when not briefly disrupting the interface with pointed string stabs or jagged power chords.

On top of the pulsating drums-tremolo keyboard continuum, Oki’s muted harmonies and portamento grace notes take up the greatest part of his expression. But sudden dog-whistle squeals, and the introduction to the improvisation’s second section, where he appears to be huffing textures from a combination of plastic trumpet and harmonica, demonstrate his blazing individuality. Integration of that unique tone and his subsequent smeared triplets into that balanced narrative also confirm the scope of the quartet’s creative free jazz.