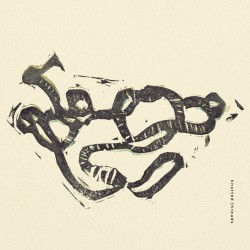 Montreal-based alto saxophonist Yves Charuest is a free improviser of the highest order, a musician of rare depth and originality. During a six-month residency in London in 2017, he heard English violist Benedict Taylor, felt an immediate affinity and soon began a collaboration that joins two of the closest listeners in improvised music. In 2019, Charuest arranged some Montreal performances for the duo and dancer Alanna Kraaijiveld, during which time he and Taylor recorded Knotted Threads.

There are innate difficulties in describing any music, but the problems compound with free improvisation. While one is free to say almost anything, finding something relevant is a challenge. Charuest and Taylor, generously, provide an ideal metaphor for their work: a series of titles taken from arcane knots used by fishermen, sailors and craftsmen for centuries, thereby highlighting both the practice and goal of their special idiom. Each is a virtuoso of extended as well as conventional techniques, each an explorer of sonority, attacks and decays – to the extent that their sounds, like their pitch ranges, intersect. Gauzy and gritty harmonics, whether bowed or blown; percussive knocks, whether plucked string or struck keypad; subtle shifts in dynamics or sudden glissandi: they all intertwine in myriad ways, whether designated as Ossel Hitch, Round Lashing, Poldo Tackle or Bimini Twist.

There are moments when the whole voyage is revealed. On Chain Sinnet, the viola sounds like a rope stretching against a gunwale, the saxophone like gulls, landed in the bow – yet all of it human, rope and gull crying as one. It’s an hour of music with the precision and gravitas of several chapters of Homer’s Odyssey or Moby Dick.