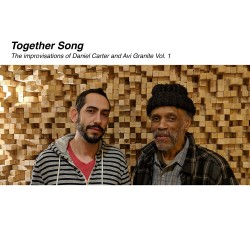 Through three pieces of varying length, multi-instrumentalist Daniel Carter (flute, clarinet, trumpet, tenor saxophone) and electric guitarist Avi Granite demonstrate the value of patience in a purely improvisational setting. This isn’t to say that more kinetic free-form music with a shorter attention span isn’t a compelling alternative approach, but Carter and Granite’s musical relationship is a thing of beauty. They not only seem to be listening closely to one other, they’re in perpetual dialogue concerning the ultimate destination of the form itself. It’s not just about finishing each other’s sentences, it’s about taking an idea and expanding upon it in a manner that opens up new possibilities.

Carter and Granite both accompany in a way that feels far more like amplification than mere coexistence. Granite’s rhythmic reflexes constantly provide the context and environment in which Carter’s vignettes thrive. On the other hand, the intent and clarity of Carter’s own articulation gives the overall work a sense of unrelenting movement. Each piece feels like it’s constantly developing, and yet perhaps the characteristic that best defines this album is space. Rather than trying to continually build upon each passage until they hit a plateau, Carter and Granite opt to meditate on their surroundings, letting the music naturally mature rather than forcing a progression. In art, there are few things more inspiring than a creative bond this powerful.