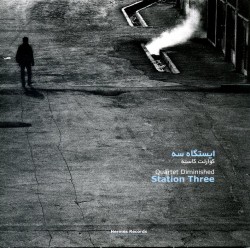 Despite the repressive theocratic regime that governs Iran, some form of music is still being performed, even progressive improvised music – as this decisive CD proves. Iranian-Canadian guitarist Ehsan Sadigh and his cohorts, soprano saxophonist/clarinetist Sohil Peyghambari, pianist Mazyar Younessi and percussionist Rouzbeh Fadavi make up Quartet Diminished. The band recorded its four extended group compositions in Tehran in a style that mixes jazz-rock fusion and purer improvisation with Persian musical overtones.

From the first track while guitar flanges, sliced string chording and cascading piano licks relate to Western music, there are also sections where Fadavi’s measured thumps take on doumbek-like resonations and Peyghambari’s pinched glissandi project ney-like characteristics. At the same time, there’s no attempt to shoehorn textures from either tradition onto the other, merely to work out a mutual blend. So, for instance, the title track is as focused on drum press rolls, calliope-like trills from the reeds and buzzing guitar twangs as on any Middle Eastern inflections. Other tracks project R&B-like sax snarls, arena-rock-like guitar shakes, modulated drum ruffs and an exploratory interlude on Rhapsody which vibrates between piano key plinks and Morse code-like reed bites.

Overall, the sophistication of the performances suggests the quartet’s name is a misnomer. Rather than diminishing sounds, the band is augmenting all timbres into a satisfying Persian-Western fusion.