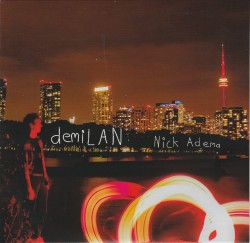 Toronto-based composer/trombonist Nick Adema’s latest offering is teeming with originality and confidence from front to back. Everything from the writing to the execution feels like the product of an artist who is conscious of their identity.

One aspect that immediately jumps out is Adema’s astounding attention to detail. Each of his compositions contains a myriad of ideas, gradually revealing themselves over time and yet all coming together to form a satisfying whole. His melodies are intuitive enough to feel eerily familiar and yet elaborate enough to make anybody’s head spin. Much like the greats, Adema’s writing possesses immense beauty while also managing to zig where others would normally zag. Another trait of his that resembles top all-time composer/bandleaders is the rare ability to make full usage of his whole group. The effects of this tendency particularly shine through the kinetic rhythm section during the final climactic minutes of Rise, and the three-man-weave in the horn section of demiLAN.

Due to the nature of Adema’s bandleading, along with the sheer talent he assembled, the most memorable moments on the album consist of celestial synergy between musicians. One definitive instance was the combination of lyricist/vocalist Alyssa Giammaria’s deeply poignant prose and the reassuring warmth of bassist Evan Gratham’s tone on the intro of the stunning Lament for the Future to Come. Ultimately, it is due to Adema’s knack for working with these parts that the whole far exceeds the sum.