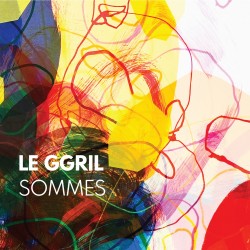 In 2014 I wrote my first sustained account of GGRIL, Grand Groupe Régional d’Improvisation Libérée, the large-scale, Rimouski, Quebec-based orchestra devoted to free improvisation, conduction, graphic, text-based and any other kind of score that falls into its wide purview. The article was based on hearing and talking to GGRIL members at FIMAV (Festival International de Musique Actuelle de Victoriaville), and the final sentence read: “GGRIL is currently recording scores by a wide variety of composers for their next album, Collection, a three-CD set that includes the pieces by Robert Marcel Lepage and Jean Derome performed at FIMAV.” Though it’s taken longer than expected, that ambition is now realized with Sommes, a three-CD commemoration of GGRIL’s 15-year history, 11 works dated from 2013 to 2020 by Québécois, Canadian and international composers, all newly recorded in fall 2020 by an edition of GGRIL that includes 21 musicians and a guest appearance by Quatuor Bozzini.

That original Lepage work, the 14-minute Alice, appears on disc one, an abstracted comedy reimagining Lewis Carroll’s work as a series of jagged, pecking dialogues between individual instruments, frequently in the bass register, occasionally reshaping the scenes with rapid-fire percussion. A brief solo episode, Chat de Cheshire, becomes a leitmotif through the set, appearing first as a bass prelude by Luke Dawson, then twice on each succeeding CD, by classical guitarist Pascal Landry, trombonist Gabriel Rochette-Bériault, cellist Rémy Bélanger de Beauport and electric bassist Éric Normand, the GGRIL founder and firebrand whose modesty limits his credits here to electric bass and a single conducting appearance.

The most ambitious performance here may be the opening one, French pianist Frédéric Blondy’s Îlots turgescents, a work of segments (“islands”) that demonstrates the orchestra’s range and power, from sudden, airliner-like, ascending glissandi to an extended, shifting drone that might model the ultimate funerary chord, stretching out to perpetuity until it includes within it an extended, gradual upward glissando increasing in amplitude. Weird Polynesian lounge jazz follows.