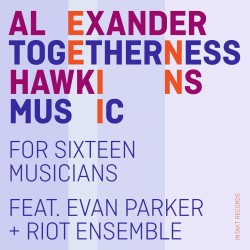 The opening movement, Indistinguishable from Magic, begins with one of Evan Parker’s spectacular soprano saxophone solos, combining circular breathing with multiphonics to suggest a flock of birds in a dome. He’s eventually joined by a cluster of electronics and strings that gradually ascend in pitch, creating tremendous tension. Sea No Shore foregrounds the varied timbres and attacks of percussionist Mark Sanders and trumpeter Percy Pursglove with a series of brief and melodic string figures that later reappear fully developed in Ensemble Equals Together. Hawkins wittily plays with expectations in Leaving the Classroom of a Beloved Teacher, setting his own kinetic piano improvisation against a wobbling “walking bass” with uneven rhythms and spontaneously determined pitches played by the Riot Ensemble with additional bass and cello. The composed materials of Ensemble Equals Together return in the concluding segment, layered with improvisations.

Compositions melding diffuse methodologies are increasingly common, but Hawkins’ effort is a fully realized work, a celebration of possibilities by a musician versed in diverse musical dialects who is finding new ground in the mix.