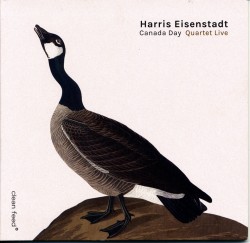 Perhaps an inadvertent comment on Canadians’ welcoming nature, this iteration of Toronto-born drummer Harris Eisenstadt’s Canada Day band is filled out by American trumpeter Nate Wooley, British pianist Alexander Hawkins and French-German bassist Pascal Niggenkemper. However, the equality expressed as the four animate Eisenstadt’s eight compositions in his Poschiavo series could relate to the harmonious melting pot-ideology that was a mark of the pre-Trump US.

Relaxed, but with a powerful, though understated rhythmic pulse, the tracks often feature hand-muted plunger expositions or open-horn clarion rasps by Wooley, a band member since it began in 2009. These are propelled in double counterpoint with the swift shading and lightly voiced textures by Hawkins, with whom the drummer plays in other bands. Leisurely or accelerated percussion ruffs, rolls and raps encourage this interaction. Meanwhile Poschiavo Four-Voice 4 is the one time Niggenkemper moves upfront with creaking sul tasto extensions and later col legno recoils which usher in moderato keyboard animation and a final lyrical brass blend.

Still, it’s the extended Poschiavo 36 that is most outstanding. As Wooley’s insentient bestial yaps sourced from trumpet innards dominate the exposition, double-bass stops and expressive piano patterning subsequently lighten the narrative. The climax exposes a melodic groove seconded by drum backbeats and expressed by the trumpeter in warm heraldic tones.

For followers of expressive improvised music this live disc should be as welcome as Canada’s July 1 holiday.