Probably the most popular instrument in the world in its various forms, the guitar poses unique challenges for analytical players. With the six-string front-and-centre in so many branches of music, how can one forge an individual path? Yet each of the plectrumists here has done so as uniquely as there are makes of guitars. 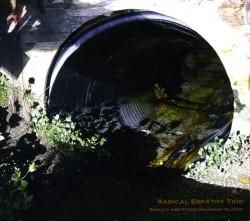 For instance Nels Cline is in a situation many others would envy. As lead guitarist for American alternative rock band Wilco, he has a steady gig with a large following. Yet Cline has been an integral part of Los Angeles’ improvised music scene since the 1980s and immerses himself back in that context any chance he gets. The Radical Empathy Trio’s Reality and Other Imaginary Places (ESP 5035 espdisk.com) is a recent example. During two extended tracks the guitarist finds a place among the swirling dynamics propelled by two committed improvisers: drummer Michael Wimberley and keyboardist Thollem McDonas.

Propelling relaxed finger-style chording alongside McDonas’ acoustic piano on the second track and challenging a miasma of swirling synthesized kinetics from the keyboardist with corrosive string distortions on the first, Cline references either mainstream or fusion jazz. Yet in both cases backed by explosive rattles and ruffs from the drummer, confounding patterns trump convention. McDonas’ keyboard expression moves from sentient hunt-and-peck chording to repetitive extraterrestrial-like glissandi during his solos. Cline’s amplified bugle-like pulsations easily make common cause with McDonas’ distinctive sounds on the latter, as the guitarist’s gentling impressionistic fills do with the first strategy. Despite on-the-mark finger-styling guitar riffs alongside acoustic piano runs or knob-twisting guitar flanging meeting kinetic keyboard expansions, no one would confuse the two for Joe Pass with Oscar Peterson or, in the other case, with Sun Ra meeting Jimi Hendrix. Still, the way Cline fits both roles, while managing to propel his own guitar definition, demonstrates accomplishment. His individual musical empathy – and that of the others – comes across as radical as well as sympathetic, making the trio’s name highly appropriate. 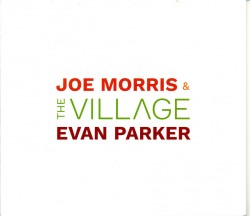 Far away from mainstream jazz and jazz-rock fusion are the specially configured musical cycles of American guitarist Joe Morris and British saxophonist Evan Parker on The Village (Fundacja Słuchaj FSR 13/2019 sluchaj.org). A first-ever duo recording, each player arrives with a distinctive instrumental approach worked out over years of experimentation. Copasetic but not compounded, the key to the Morris-Parker duo is that neither abandons individual expression while propelling tandem association in double counterpoint. Sticking to moderated tenor saxophone smears on the nearly 40-minute opening, The Mound – a similar linkage with Parker’s intense nasal soprano saxophone tones is highlighted on the other brief track – the reedist’s multiphonics splutter, smear and slap beside Morris’ canny use of pointed patterning that encompasses high-pitched stings sourced from near the tuning pegs and mid-range, folksy strums. Meanwhile, as the duo’s key-in-lock cooperation is activated, enough distance is maintained so that episodes of Parker’s instantly recognizable circular breathing develop logically, as do those passages when Morris’ string pressure gives the sequence a low-pitched rhythmic feel. Eventually, scratching string fills backed by reed vibrations confirm that each player has adapted enough of the other’s distinctive approach to improvisation to create an intertwined finale. 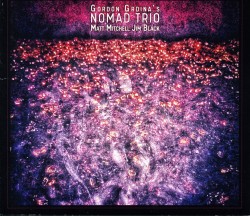 Nomad Trio (Skirl Records 044 skirlrecords.com), as a trio filled out by Americans, pianist Matt Mitchell and drummer Jim Black join Vancouver’s Gordon Grdina to interpret six of his compositions. While only the final Lady Choral picks up the exquisite bass and treble patterns Grdina can create using the multi-string oud, playing guitar his robust finger styling sounds nothing like Morris’ introverted interval stings or Cline’s throbbing rock-inflected fills. Instead his playing is both sharp and swift, as if he’s an elated Jim Hall, coursing and flaring against the drummer’s active clatter or cymbal rebounds, as the pianist slides from Grdina’s string-and-fret architecture on Ride Home allows for story-telling reflection, as he moves from note constriction to expansive flanges. Meeting percussion splashes and processional keyboard lines, guitar pulsations make the finale so connectively opaque that it’s almost overbearing. 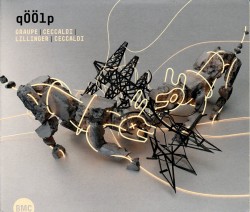 On the other hand, few tropes point out the diversity that can exist among guitar-focused combos than the following sessions, both of which include French cellist Valentin Ceccaldi. One-quarter of the oddly named qÖÖlp group, the band’s eponymous CD (BMC CD 257 bmcrecords.hu) defines the symmetry expressed by a working group that includes the cellist and his violin-playing brother Théo Ceccaldi, as well as two Germans, guitarist Ronny Graupe and drummer Christian Lillinger. With Graupe and Lillinger serving as the counterbalance to the cultivated arco and pizzicato strategies of the Ceccaldis, guitar motifs are all over the ten selections in solo features or in duo or trio pairings. The antithesis to this is Points (MultiKulti Project MPSMT 016 multikulti.com). Consisting of four lengthy improvisations, the performances featuring cellist Ceccaldi and three Lisbon-based players are better integrated. Connection is such in fact, that the string shadings of guitarist Marcelo dos Reis sometimes almost vanish into the synchronous sounds created by the blended textures of percussionist Marco Franco, trumpeter Luis Vicente and the cellist.

On the qÖÖlp session, Graupe’s assertive soloing is best defined on WröökJ. Sweeping up from an interconnection of string-based tones, the guitarist suddenly breaks out rock-related runs that almost literally punch a hole in the sequence and, backed by Lillinger’s power pops, quickly expose a series of frailing and plinking theme variations. With a selection of moods ranging from refined to raw, the four musicians take cohesion to its logical conclusion. No matter how radical the motifs become, continuity remains. This is expressed best on the textural framed finale of Get Together, when a combination of energetic, near impenetrable ruffs from the drummer and intermittent picking from the guitarist threaten to spin out of control before being reined in. Additionally, there’s the, unusual-for-a-European-band, track titled Toronto. Yet this stop-time near-ballad seems to describe the city with a moody collection of sliding string harmonies. In fact, when the four stretch out, as on extended tracks like Mermaids and Sperm Whales the qÖÖlp members can dazzle. Speedily they move from unison moderato expositions to delicate minuet-like narratives. Fusing arco cello and violin lyricism to guitar frails that emphasize impressionism, they’re completed by favouring the metallic properties of energized violin and guitar runs plus precise drum runs. Never is momentum lost nor does any linkage seem artificial. 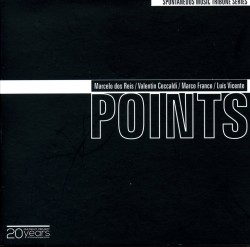 Valentin Ceccaldi’s other affiliated outing is much more exploratory, but no matter how long the tracks are, or how the extended techniques upend the program, the tracks always right themselves into harmony variants. Rotating the introductions among band members, as themes are elaborated, spontaneous interactions occur, such as having downward slithering Harmon-muted trumpet tones underscored by sul tasto cello responses; or how melding cymbal splashes, gutbucket brass smears and spiccato strings produces memories of both Debussy and Dixieland. Throughout, dos Reis forges a singular path, with his contributions more felt than heard. Only at the very end of the Exclamation Mark for instance, are distant flanges and plucks audible. Meanwhile among sequences where all members’ elevated pitches or foundation croaks are emphasized, Question Mark is the most fully realized. Almost an assembly line of effects, it begins with distant guitar string plucking, exposes pure air forced through the trumpet without valve motion, introduces drumming clip clops and completes the first cycle with swift strokes from the cellist. The climatic resolution finally arises as brass tones brightly flutter on top of drum press rolls while Ceccaldi and dos Reis combine into a flurry of percussive near-Andalusian cadences. Instructively the finale evolves into warm lyricism as trumpet peeps and finger-style string emphasis gently combine.

Upfront or reticent, each of these guitar strategies uniquely complements the improvised musical situation in which it is placed and suggests that many other strategies are feasible.