With the trumpet’s traditional heraldic and heroic roles in most music, and construction which depends on only three valves, tubing and a bell, it would seem that distinctive brass innovation would be at a premium. Yet as the following discs demonstrate, those who mix innovative concepts and technical sophistication can create notable exploratory sessions.

While American Dave Douglas’ Engage (Greenleaf Music GRE-CD-1074 greenleafmusic.com) is the performance closest to the jazz tradition, his choice of engaged song titles such as Sanctuary Cities and Living Earth confirms his political concerns, while the group lineup is unconventional. Besides drummer Kate Gentile and bassist Nick Dunston, it includes guitarist Jeff Parker, cellist Tomeka Reid plus Canada’s Anna Webber moving among alto and bass flutes and tenor saxophone. Engaged, not agit-prop though, challenges are expressed in sound. Orchestral, with a bass flute introduction for instance, In It Together splinters from anthemic to atonal due to trumpet gusts, swift cello string jerks and barbed guitar frails. One Sun, A Million Rays mates an exemplar of brass tongue jujitsu and valve hide-and-seek timbres propelled by guest trumpeter Dave Adewumi, with parade ground-like drumming and a chromatic counter line from the flutist. Meanwhile Living Earth could be a sleigh-ride melody reimagined by a Dixieland combo, although Webber’s tough tenor intensity, Parker’s colourful finger-picking and Douglas’ open horn work, backed by vamps from Adewumi and another trumpet guest, Riley Mulherkar, confirm its contemporary stance. This substantiates another Douglas concept. Like a concerned progressive who wishes society to evolve not rupture, his compositions cannily advance new textures that build on established ones. Faith Alliance and Free Libraries, Engage’s most advanced tracks, are instances of this. Faith Alliance slides Parker’s Jimi Hendrix-like squealing flanges and razor-sharp distortions within a layered horn vamp, culminating in a challenge from string pressure to brass expansion. Free Libraries could be termed roots music with the cello’s string swelling and the guitar’s blues licks never disrupting the harmonized horn part that, with gentling grace notes, instills concluding calm.

Touching on roots music by inference is Dropping Stuff and other Folk Songs (Relative Pitch RPR 1094 relativepitchrecords.com) but the eight tracks don’t resemble any extant folk music. Instead they reflect the sounds made by instruments stretched to their technical limits during improvisations created by an unconventional line-up of Amsterdam-based violist Ig Henneman and flutist Anne La Berge plus American trumpeter Jaimie Branch. There are a few instances of the extroverted trumpeter producing bugle call-like vamps, ferocious yelps and an entire section on the concluding title track where her inner Bubber Miley is revealed via plunger mute snarls. But Branch generally mutes her output to match the others’ horizontal pitches. Meanwhile La Berge often concentrates on affiliating peeping and keening trills as Henneman’s spiccato string slices alternate between disruptive angled pings and flowing ostinato pulses. Although enough echoes within the trumpet’s body tube, narrow flute whines and dissected string drags are featured, a perverse lyricism sometimes peeks through. Branch’s arching brassiness is effective in meeting the pseudo-romanticism of Henneman’s sluicing buzzes on Gigging, while unexpected, though quickly cut off, trio elation characterizes Canal Rounds. However the defining track is the extended When bells stop ringing. Melding the violist’s sul ponticello swells with the trumpeter’s propelling triplets and smears at Flight of the Bumblebee speeds, flute peeps create the connective continuum. Finally harmonized whistles from the horn players match Henneman’s protracted string sawing for a downshifting conclusion.

Also in the realm of close-knit tripartite improvisation, but intensified with programming, is Hangkerum (Clean Feed CF 533 CD cleanfeedrecords.com) involving trumpeter Tom Arthurs and electronic musician Isambard Khroustaliov both from the UK and Swiss percussionist Julian Sartorius. Vibrant and balanced, the disc consists of five tracks, which purposely reveal the distinct aspects of each instrument through separation and interaction until the trio’s parallel strategies cinch. Beginning with rounded trumpet notes, Arthurs’ pitches are held and framed by galloping pulsations from Khroustaliov’s electronics and Sartorius’ intermittent beats until the brass player’s muted lyricism, highlighted with note flurries, meets knob-twisting oscillations and sharp, unexpected peeps. By the time Herrgöttli is elaborated, midpoint digression has Arthurs timbre-stretching to piccolo trumpet-like pitches or fluttering growls, but without weakening the narrative thread which was advanced at the outset. While the electronic undulating continues in building tension, there’s a sudden realization that live processing has created a secondary brass line, whizzing alongside the first. Timed chimes echoes plus power ratamacues from the percussionist concentrate the textures of the subsequent Duch even further, until halfway through a nuanced melodic line from the trumpeter unexpectedly floats over the sound miasma, leading to Reréaux, the extended finale. Picking up on each of the sound properties propelled by the trio members, the piece is buzzy, bellicose and breezy in equal measures. While the programmer’s synthesized outer-space-like whooshes and juddering oscillations are audible, so are the drummer’s doorbell-like tolling, churning bass drum pumps and ascending cymbal pings. Yet as much as the percussion and electronics vibrate irregularly beside him, Arthurs not only excavates the nooks and crannies of his horn for unusual textures, but uses muted puffs to confirm the alluring beauty of the suite. 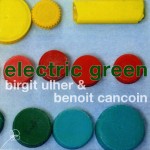 Stripped down even further in concept and execution is the duo of French bassist Benoit Cancoin and German trumpeter Birgit Ulher, who uses a radio, speakers and objects to further splinter her brass sound during Electric Green (Blumlein edition blumlein.net). Interestingly enough, despite the obvious differences between their instruments there are points at which the bassist’s arco string sweeps and the trumpeter’s sounding of wide projected textures make differentiation nearly impossible. Most of the time though, Cancoin propels his low-pitched stops and rubs to create an ongoing continuum, while Ulher manipulates her horn and add-ons to source unique vibrations. One second she can output fire-drill-like elevated pitches, while on the next inflate balloon-like blows from deep inside her horn or latterly produce gentle flute-like tones. In fact, the extended Seladon is one of the date’s most low-key tracks with brief sniffs and watery gurgles from the trumpet’s innards brushing up against the bassist’s string stretching and wood banging until her aviary bleats and his col legno string slaps move their strategies closer. Establishing individual real estate they can be discordant, as on Aureolin, contrasting jet-plane-like brass propulsion and powerful purported string shredding from the bassist. But overall the aim is to stretch expected timbres in the course of affiliation. By the brief, final Signal Blue, they establish an unshakable rapport so that the trumpeter’s note burbling and mouthpiece French kisses snugly align beside the closest Cancoin comes to pumping out a swing beat on the date.

Something completely different is Possible Worlds (SOFA 575 sofamusic.no), a single track, 66-minute program of mesmerizing avant-ambient sound by Norwegian duo Pip. Consisting of Torstein Lavik Larsen on trumpet, sampler and synthesizer plus Fredrik Rasten who plays fretless electric and acoustic guitars, chimes and electronics in varied combinations, here the brass is used sparingly to infuse accents onto constantly repeated microtonal hooks propelled by Rasten’s slurred fingering. Subtly, the sequences gradually intensify as the track progresses while synthesized granular motifs including brass vibrations and organ-like sweeps inflate and take up more aural space. A defining diversion arrives at the three-quarter mark as the finger-picked guitar pulse is strengthened and turns upwards to meet synthesizer drones and percussive slaps. Meanwhile, inside horn growls from Larsen wash over the interaction. After fuzz tones, chime echoes and dripping water-like sound samples are introduced into the mix, the continuous guitar strums are reintroduced to slide through harsher drones and bond with the exposition.

Each of these trumpeters chose to blow his or her horn in a unique fashion and all the strategies are equally valid.