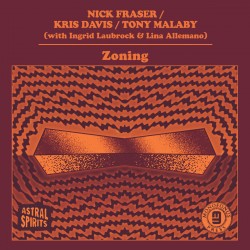 At times, Nick Fraser has been Toronto’s busiest jazz drummer, but he’s increasingly involved in developing his own music and some key international partnerships. Among his projects is this trio with New York-based saxophonist Tony Malaby and pianist Kris Davis. For the trio’s second outing (Too Many Continents appeared in 2015), they’ve enlisted guests: New York saxophonist Ingrid Laubrock and Toronto trumpeter Lina Allemano appear on the three Fraser compositions included here.

It’s a hard-edged band with a disciplined intensity that shows in each taut track, with or without guests, a give and take between form and freedom that often moves toward form. The incendiary opening dialogue between Malaby and Laubrock (he has the warmer jazz tone; she’s responsible for the weirder hollow harmonics and deliberate bleats) is eventually drawn into form. Throughout the program, tight-knit figures are frequently employed to develop structural tensions that will ultimately explode before reassembling themselves.

It’s just one crucial piece in this demanding set of brilliantly realized works.