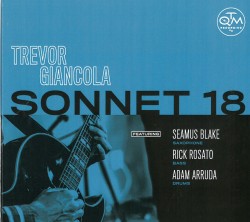 Guitarist Trevor Giancola’s sophomore album, Sonnet 18, is one of the season’s most anticipated modern straight-ahead jazz releases. A follow-up to 2016’s Fundamental, which saw Giancola in trio format with bassist Neil Swainson and drummer Adam Arruda, Sonnet 18 is one of the first offerings of the new TQM Recording Company, helmed by Ron Skinner. Recorded live-off-the-floor at Toronto’s Union Sound in February 2019, this new album is notable for its rich, warm sound, for Giancola’s intelligent compositions, and for its personnel list: joining Giancola are Arruda, bassist Rick Rosato and saxophonist Seamus Blake. (For those unfamiliar: though Arruda, Rosato and Blake are Canadian, all three are based in the US, and are well-established names on the international scene.)

Sonnet 18 has many highlights, including Retrospect, a bouncy, medium swinger that features a stop-time melody played tightly by Giancola and Blake. It’s All Good, Man, a trio track, is a beautiful, reflective journey, with relatively simple melodies sitting atop lush harmony. A + B sees Arruda in fine form, crisply tracing the contours of the 5/4 song’s structure; Stream, the album’s final track, patiently builds in intensity to one of Blake’s most exciting solos. Throughout Sonnet 18, Giancola is the tie that binds the music together, playing with clarity, intelligence and enviable tone, from the album’s most sensitive moments to its most aggressive. A commendable second album, and a strong beginning for TQM.