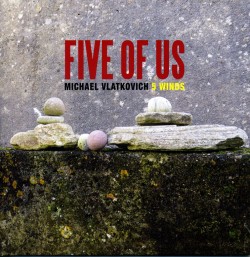 Gathering four of Toronto’s most accomplished horn players to collaborate on his 5 Winds Suite and other compositions, American trombonist Michael Vlatkovich recorded this disc at Array Space, producing sounds that recall both a disciplined concert band and a freeform improvising ensemble.

Dividing the presentation so that the higher-pitched trumpets of Lina Allemano and Nicole Rampersaud are contrapuntally stacked against darker timbres from David Mott’s and Peter Lutek’s saxophones, the trombonist challenges or harmonizes with each group in turn, lowing snarls when called for and shrilling flutter tones when necessary. Working through call-and-response sections as well as individual solo spots, the crafty arrangements are particularly notable on the suite. Sophisticatedly layered to highlight individual voices, a climax of sorts arrives with Part 5: Five. Mott’s baritone saxophone sighs move from melodious harmony to screaming intensity as the muted brass tones bolster the background. Although top-of-range cries and slurs dominate, dissonance never upsets forward motion.

Similar strategies underline the other sequences. On the introductory Please Help Me I’m Blowing Bubbles, for instance, Vlatkovich’s airy slides harmonize with descending reed amplifications. Later, after the five experiments with variants of split tones, slurs and shakes, the concluding For The Protection of Yourself and Others You’ll Need to Wear Your Space Suit is bouncy and boisterous but balanced despite shuddering capillary brassiness and reed glossolalia. Four of the five musicians may come from a different country, but exemplary improvising within crafty arrangements knows no boundaries.