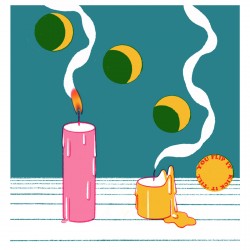 Kick It ’Till You Flip It
Eucalyptus
Lorna 10/ HAVN 054 (brodiewest.com)

West’s compositions can suggest African pop music, but they also have affinities with a broad swath of work, from Terry Riley to Ornette Coleman. Something Sparkly is perfectly dreamlike, its slow theme weaving through bright electric guitar and exotic overlapping rhythms. It suggests Sun Ra’s stately early music, a resemblance heightened by Ryan Driver’s trebly clavinet, a keyboard Sun Ra called a “solar sound instrument.” West’s solo seems suspended between melody and birdcall. The title track develops with the horns playing a short, taut figure, then gradually moving out of synch with one another amidst the various rhythmic paths at hand. The entire LP testifies to West’s artful concision, but his compressed, expressionist solo here is a miracle of improvisational economy.