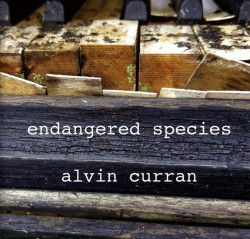 American composer Alvin Curran is famed as a member of Musica Elettronica Viva, the pioneering improvising electroacoustic ensemble. Yet in his 80th year he has revived his primary musical experiences, playing American Songbook standards. But since this is Curran and this is the 21st century, this two-CD set of classic tunes arrives with a twist. Besides his subtle piano improvisations that impressively re-imagine the tunes, he employs a Yamaha Disklavier. Resembling a grand piano, but actually a blend of acoustic keyboard, player piano and digital computer, the Disklavier allows him to append any manner of previously recorded sounds to the tracks.

Each of the 18 compositions goes through a similar transformation, whether it’s 1896’s Red River Valley or 1955’s Arrivederci Roma. While most include a humorous palimpsest of the original, only Arrivederci Roma with its sonic overlay of crying infants, street noises and snatches of Italian-language conversations, add a hint of seriousness to the familiar light-hearted melody, since Curran has lived and taught in Rome since the early 1960s.