More so than just about any other horn, the trumpet’s engineering makes it difficult to imagine as an unaccompanied solo instrument. Unlike woodwinds’ many keys, brass players have to make do with three valves, a mouthpiece and curved tubing. Yet increasingly in recent years, adventurous trumpeters have overcome these constraints to create notable sounds.

Divergent players utilize various strategies to do so. Take Susana Santos Silva for instance. During the 42-minute piece that is All The Rivers (Clean Feed CF 458 CD cleanfeed-records.com), the Portuguese trumpeter not only adds textures from bells and a tin whistle to augment her brass tones, but uses the arched spaces and marble detailing of Lisbon’s Panteão Nacional to add spatial properties to her improvisations. Tentatively testing the space with a column of pure air, she soon expands her exposition with rubato growls, which echo back in the form of heraldic grace notes. Adding to the mesmerizing narrative, tinkling bells underscore sputters and bugle-like bites; then, midpoint, half-valve effects signal a detour into melodic melancholy characterized by antiphonal extensions of each rounded tone. Turning more upfront, as brassy patterns and their playful extensions sound over and over, Silva eventually expands the narrow peeps and brief chiming into an assemblage of dyspeptic snarls and resulting vibrations which define her journey while referring back to the introduction. When the climax is followed by protracted applause, you realize that an enthralled audience has been listening in rapt silence throughout.

Another improviser who assuages brass singularity is Chicago’s Rob Mazurek, who on Chimeric Stoned Horn (Astral Spirits MF154/AS054 robmazurek.bandcamp.com) processes timbres from his piccolo trumpet and voice through a modular synthesizer and sampler. Created in tandem with an exhibition of Mazurek’s 3D lithographs, the 16 brief tracks don’t accompany the visuals, but amplify the artist’s ideas in an allied medium. Almost totally abstract from the start of the first track, Arrival from a Distance, Mazurek teases the brass instrument’s definition, by not only ringing bells and murmuring under his breath but constantly distorting the alternately sweet and sour textures with blurry processing. As sequences run into one another almost without pause, scratchy, intermittent buzzes as well as playful trumpet spurts, often with multi-part harmonies created by live sampling, judder every which way. By the time the midpoint Hollers Charged is reached, with its collection of heraldic and echoing tones that resembles guitar flanges, the preceding tracks have introduced unique palindromes ranging from stentorian blasts to echoing wisps. A similar assembly line of undulating mechanized drones moves almost without pause through the remainder of the suite until half-valve effects and triplet trills on Planets Lower Crust finally assert a rugged rhythm from the horn. Like two parts of an equation drawing together for a solution, on the penultimate three tracks the rumbles and drones from granular synthesis move closer to intermittent trumpet variations, so that by the final Swarm Hands, an interlude of through-the-horn humming plus intermittent bell ringing sets up a shamanistic and sophisticated conclusion.

Cheating slightly, Alberta-born, Brooklyn-based Stephanie Richards’ nine trumpet tracks inspired by moon phases on Fullmoon (Relative Pitch RPR 1066 relativepitchrecords.com) are given added verisimilitude by her own percussion playing and live sampling from a second musician: Dino J.A. Deane. Still, by treating the trumpet as both a brass instrument and a sound source, Richards’ improvisations are the dominant force here. Stripping her tone to its core, she determines the rhythmic and thematic essence of the suite by contrasting brass peeps and puffs plus percussion rebounds, as Deane’s machine simultaneously reconstitutes her original sounds. As the sequences move from the introductory New Moon to the final Full Moon (Part II), the most sympathetic and unique timbres are heard in the middle phases. That’s because the first track depends on low, then higher pitches that emphasize the brassy part of the horn’s output and are paced by Deane’s jiggling flanges. In contrast, the concluding lunar phase is notable not only for a multiphonic narrative elaboration, but also because the torqued air and grace-note puffs during the finale confirm the lead instrument’s brassy identity. Earlier on, the waxing of the cycle brings forth hefty puffs and pants which, aided by sampled oscillations, appear to accompany themselves with multiple asides that are simultaneously rough and smooth. Eventually passing through the two parts of Gong, resonations as muted airs are distorted with granular synthesis as the narrative toughens, so that the waning phases suggest bull elephant-like trumpeting. In truth, the piece climaxes during the penultimate Full Moon (Part I). As Deane’s crashing oscillations create sonic peaks and valleys on the lunar surface, Richards’ integration of dirty growls and ethereal puffs create an impressionistic tour-de-force that not only balances Deane’s electronics judders, but also cunningly relates back to the introductory lunar phase. 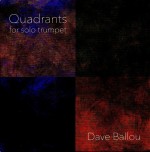 Unadorned solo trumpet playing can be spectacular as well, as Baltimore’s Dave Ballou proves on Quadrants for Solo Trumpet (pfMentum CD 113 pfmentum.com). Dividing his one-hour suite into four equally timed tracks named for the points of a compass, Ballou uses a particular pitch set as connective thread to turn technical virtuosity into continuity. Variety is provided as he moves without pause among trumpet, piccolo trumpet, flugelhorn and an assortment of mutes. Sticking to hourglass-timed limits, the most surprising exposition occurs on South, the third quadrant. The preceding North and East tracks are awash with Morse-code-like brass spurts: abstract open-horn sound bursts, sour tones and wavering growls on the first; whiny puffs, unexpected hocketing phrases, fortissimo blasts and legions of tone patterns expressed in tremolo variations on the second. Putting aside bent notes and grating breath-draining blasts, Ballou on South expands on the few moments of melody in earlier tracks to create a beguiling line. Before capillary dissonance is introduced at the halfway point, Miles Davis’ mellow soloing on Sketches of Spain or a variant on Ol’ Man River is suggested. Maintaining the mood, Ballou speeds up the tempo in a variety of keys and pitches to adumbrate a second trumpet’s timbres as the underlying theme diminishes to moderato and finally to a breathy ending. With the praxis defined, West becomes the session’s coda, as Ballou summarizes the preceding sequences by alternating among spittle-encrusted skyward blasts, guttural growls and whimpering puffs. Precisely knitting chromatic runs and capillary trills, the resulting sound reflects both the session’s abstract explorations and balladic affirmation.

A trumpeter who artfully illuminates the balladic, as well the boisterous underpinnings of unaccompanied brass creation, is Connecticut’s Wadada Leo Smith, who has released solo records since 1971. Distinctive, Reflections and Meditations on Monk (Tum CD 053 tumrecords.com) is notable because he assays four Thelonious Monk tunes with an equal number of his own compositions. Playing the more familiar material here doesn’t make the set conventional, though. While lines such as Ruby My Dear and the inevitable ‘Round Midnight are given respectful readings, with hesitant pacing and dissonant smears, Smith’s refined delicacy on Crepuscule with Nellie – which Monk wrote when his wife was undergoing surgery – implies tenderness, as the trumpeter chromatically builds up the narrative to reach the instrument’s highest pitches without distress, then smears the performance back to relaxed pacing for the finale. More crucially, Smith’s own Reflections manages to honour the pianist/composer without sounding anything like Monk’s work. The slyly titled Monk and Bud Powell at Shea Stadium – A Mystery is the apex. Eschewing baseball and bop clichés despite the two obvious references, the trumpeter slyly starts breaking up the horizontal exposition into short bursts of vibrating and extended grace notes without strain, including note-flurry details to maintain motion. Eventually, the stretched-to-its-limits sequence turns whispery, but not wimpy, as Smith’s capillary slur gradually runs out of air.

Deep thoughts and even more profound playing ability went into each of these sessions. On its own, each proves that following an unaccompanied trumpet recital for a protracted period can be as fascinating as listening to any quality sounds.