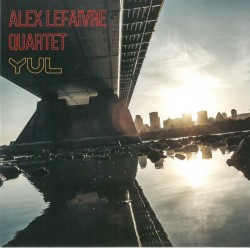 YUL, a new release from bassist/bandleader Alex Lefaivre, is a modern jazz album whose compositions take inspiration from the “dreamy, hazy summer vibes” and “gritty, metropolitan edge” of Montreal, the city in which Lefaivre is based. For those unfamiliar with Lefaivre, he has been an active member of the Canadian music scene for well over a decade, both as part of the award-winning Parc X Trio, and as a founding member of the independent jazz label Multiple Chord Music.

Joining Lefaivre on YUL are Erik Hove, alto saxophone, Nicolas Ferron, electric guitar, and Mark Nelson, drums (Lefaivre plays electric bass throughout). It speaks both to the open quality of Lefaivre’s compositions and to the group’s instrumentation that there is ample room for each player’s individual voice to come through clearly, and, consequently, for a compelling group dynamic to emerge. This is certainly the case on the album’s first track, the medium-slow 3/4 time The Righteous, which features dynamic solos from Ferron and Hove, set atop patient, supportive comping from Lefaivre and Nelson. Even during YUL’s most bombastic moments – such as the breakbeat-heavy song The Juggernaut – there is considerable attention to balance and to dynamic detail. The album closes with the title track, a 5/4, straight-eighths song that contains some of the most exciting moments of the outing from all four band members, including a short, memorable drum solo from Nelson. YUL is a cumulative success – reflecting Lefaivre’s mature, cohesive musical vision.