Just as definitions of various forms of music have changed over the decades, so has the interpretation of what exactly constitutes a large jazz or improvised music orchestra. Sure, there are still plenty of bands that stick to the popular Ellington-Basie mode with a fixed number of players and tunes. But that’s no longer the norm. As music becomes more open and global, orchestral and so-called exotic instruments beef up the sections; a pre-determined number of players in each section is ignored; and the use of electric instruments and electronics has soared. Equally outstanding in execution, here are some instances of how uniquely constituted large ensembles operate.

In this context, the Scandinavian Large Unit is the most traditional. The group on Fluku (PNL Records PML 038 paalnilssen-love.com) includes three reed players, three brasses and a rhythm section. The reed players double or triple among saxophones and clarinets; the brass section is a trumpeter, a trombonist and a tubaist; rhythm is divided among an electric guitar, two acoustic/electric bassists, and two percussionists, including leader/composer Paal Nilssen-Love; plus there are electronics from Tommi Keränen. Using the ensemble’s elements to maximum effect, the band creates passages that rebound from presenting everyone in full flight to individuals, such as Thomas Johannson’s clean trumpet leads or the gnarly this-side-of-metal shronk from guitarist Ketil Gutvik. Extended tracks such as Playgo and Fluku emphasize divergent aspects of the band. A Latin-inflected swinger, Playgo highlights contrapuntal reed-brass textures, and then divides into duets: almost human vocalized smears from trombonist Mats Äleklint matched with slap percussion; heraldic trumpeting with rippling sax riffs; and finally, crying alto saxophone vibrations challenging vigorous ruffs from drummers Nilssen-Love and Andreas Wildhagen. Keeping the theme consistent is one of the Unit’s three alto saxophone players; a Bolero-styled counterline intersects, and synthesized wave form crackles finally subsume the narrative. Almost 27 minutes long, the title tune develops in several seemingly incompatible directions, initially suspended between Gutvik’s rough twangs and Keränen’s twisted drones. Interjections from other instruments make the performance murkier, until a distinct theme appears one-third of the way through and stays audible until the end. As Per Åke Holmlander’s tuba burbles open and shut, petal-like, to add or subtract low-pitch ballast to the creation, dollops of swing infuse the narrative via patterning vamps from baritone and tenor saxophones plus near-funk drumming. Concentrated riffs are finally pushed into a crescendo of polyphonic solidness pierced by harmonized brass flutters moving up the scale and latterly pulled aside to allow for a slurred showcase from the guitarist, accompanied by subtle drum beats that eventually harmonize with the theme that has been there all along.

With the same number of players but different instrumentation, Le Tombeau de Poulenc (Yolk Records J2069 yolkrecords.com) provides a contrasting view of ensemble orchestration. Invoking the Concerto for Two Pianos and Orchestra by French composer Francis Poulenc, the group’s three composers – pianist Jean-Christophe Cholet, saxophonist Alban Darche and Mathias Rüegg – created 12 themes which slyly interpolate swing into formalist concepts, ending with a tight, rhythmic program, making this group sound twice the size of Large Unit. Tracks reflect each composer’s perceptions. For instance, the exposition of the supple and multi-hued 2nd Convergence by Cholet, who shares piano duties with Nathalie Darche, is a keyboard continuum that melds with munificent string harmonies as backdrop to laughing saxophone vibrations and graceful trumpet tones, with the parallel counterpoint climaxing as it’s pushed by bass string rubs and prodded by drum pulses. Meanwhile, the chromatic gusts propelled by Pascal Vandenbulke’s flute on Cholet’s 3rd Convergence are as formal as a chamber piece, until cabaret-style keyboard clipping and a low-key alto saxophone solo alter the moderato theme to animate pastel-like orchestral colours. Rüegg is most interested in instrumental layering. On Dans les Idées de Poulenc, a matching three-dimensional sonic picture is created though speedy keyboard bravura plus ascending saxophone counterpoint. Layering the tones of trumpet, trombone and tuba on Dans le Sens de Poulenc (with Matthias Quilbault’s tuba as prominent as the others), proves that such instruments can swing without expected call-and-response patterns. Closest to mainstream jazz, the blues inflections which enliven the choppy piano lines of the Darche-composed Le Tombeau de Poulenc 1 find violinist Marie-Violaine Cadoret’s contributions sliding from precise romanticism to silent-movie-like melodrama to double-stopping dissonance. Clanking claves and Latinized piano-fills on the concluding Le Tombeau de Poulenc 4 (another Darche piece) extend the polyphony enough so that subsequent showcases for saxophones and brass can trade orchestral strictness for musical freedom. This CD banishes the spectre of a jazz-classical pastiche and confirms the group’s and the composers’ ability to create rousing sounds that don’t stray that far from European precision. 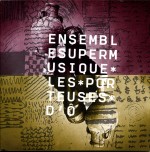 Larger than the former group and more obvious in its use of strings, percussion and electronics is Montreal’s Ensemble SuperMusique (Ambiances Magnétiques AM 239 CD actuellecd.com). The tracks on Les porteuses d’Ȏ are also less homogeneous than on other discs. Although these single compositions by ensemble founders, percussionist Danielle Palardy Roger and saxophonist Joane Hétu (plus one from Vancouver’s Lisa Cay Miller) utilize a mixture of notation and improvisation, the results are undeniably divergent. Ostensibly about Canadian drinking water rights, Miller’s Water Carrier is multi-sectional, with strident tutti interludes. Otherwise, the narrative depends on contrasts between upbeat concert band-like melodies from the horns and Guido Del Fabbro’s delicately formal violin elaboration, with the churning rural landscape characterized by Bernard Falaise’s clanking guitar effects, plus primitivist slashes from Alexandre St-Onge’s electric bass and electronics. Additional strength is given to the track’s political message by repeated scrapes on bare acoustic strings plus Ida Toninato’s gusty baritone saxophone. Describing a journey among the planets, Roger’s En arrivant par le nuage de Oort uses electronic crackles and pops to underscore the extraterrestrial journey. With echoing percussive swats from her kit and that of Isaiah Ceccarelli, rugged reed smears and sprung sul ponticello pressure from Del Fabbro, violist Jean René and cellist Rémy Bélanger de Beauport, plus some snarls and growls from trombonist Scott Thomson, the composition reflects the energy and turbulence of the heliocentric world. And like the predicted end of the universe, the tremolo piece doesn’t climax, it just ends. Based on mumbled vocalese, Hétu’s Préoccupant, c’est préoccupant is more problematic since her gargles, whoops and whines are often incomprehensible. Melodramatic and dissonant string section swipes, guitar flanges, buzzing wave forms and unfocused drum beats contribute to the verbal commotion, rather than framing or defining it.

Voices in plural or solo (Maggie Nichols) are also featured on the Glasgow Improvisers Orchestra’s The Word For It Now (FMR CD 458-0817 fmr-records.com). Although its selections are text based, the improvisational skill of Nichols and four backing voices mean that phrases are so swaddled in gurgles, gargles and growls that only the occasional word slips through. Designed to highlight the gamelan-like reverberating clanks from specially fired ceramic sculptures, A Bit in the Air also reduces the 30 instrumentalists (including eight string players and four guitarists) to interpolate with yelping tenor saxophone trills or bolstered triple-tongued trombone slurs, as Nichols’ agile soprano sashays around the sculptures’ crystalline timbres. With the vocalist(s) as capable at actualizing pseudo choking as lyrical warbles, the result is distinct energetic music that yokes metallic scrapes and distinct cries into a unique commentary. The two variations on A Peculiar Slumber are designed to showcase spatial and word-based response to the concert location, but with Nichols’ quirky scatting reigned in, there’s more pure instrumental space available. Highpoints include a duo between Marilyn Crispell’s studied piano pressure and emotional slurs from one of the trombonists; a swirling near-bop exposition from alto saxophonist Raymond MacDonald and one of the tenor saxophonists; and an undulating line from one of three double bassists that provides scope for Nichols’ mercurial syllable swallowing. In contrast, A Peculiar Slumber’s climax jams enough electronic-stressed clicks, reed slurs and brass flutter tones into the orchestral frame, so that the track reaches a crescendo of massed exuberance before subsiding.

Exuberance also engulfs Lux (Umland Records 53 umlandrecords.de) with the 27-member, Essen-based The Dorf orchestra pumping out nearly opaque sound pieces. Their squirming timbres are directed as much by rhythm – including Theremin, synthesizer, three electronic players, two drummers and three guitarists – as by the comparable reed, brass and string tones. Infused with coagulated sequences that blend Wagnerian and metal densities, the characteristic tracks are Jour and Mill. The first augments seemingly without breathing space, through hardened guitar torque and drum beats like the thump of hobnailed boots, until a noisy climax gives way to the aural equivalent of afterimages. More attuned to orchestral colours from the acoustic instruments which tint the grisaille-like narrative, Mill mixes the crackles and smacks of programming and percussion, with whinnies and bellows from brass and reeds. As a commanding backbeat directs the narrative in a linear manner, trumpet grace notes and tongue splutters from the reeds provide the humanity and calm to the otherwise over-the-top creation. Finally, with all 25 players joined in a crescendo of muddied ecstasy, the ending explodes and is quickly cut off. With other tune variations on these themes, The Dorf demonstrates that rawness can be expressed and then tempered into a draining but dramatic program. So it is with all the ensembles here, whose similarities relate only to group size and the performance’s musical sophistication. 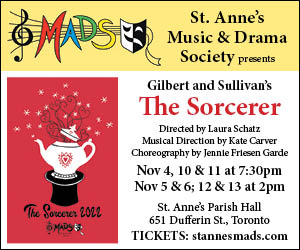