After a couple of quiet years the annual Guelph Festival (GJF), September 13 to 17, is newly energized and asserting its role as one of Canada’s most consistent showcases of adventurous music. Another reason for this year’s buzz is that besides the outstanding Canadian and American musicians consistently featured at the GJF, major European improvisers will be on hand as well.

Probably the band members most equipped to show off their individual and cumulative talents in different settings are trombonist Ray Anderson and bassist Mark Helias, who both live near New York City, and fellow American, drummer Gerry Hemingway who lives and teaches in Luzern, Switzerland. Together they make up BassDrumBone (BDB), which celebrates its 40th anniversary on September 16 as part of a double bill with Montreal-Vancouver quartet MendHam at the Co-operators Hall of the River Run Centre (RRC). On September 15 Anderson’s Pocket Brass Band will be the closing act at the Market Square Stage. Then, on September 17 at the Guelph Youth Music Centre, Hemingway, in duet with German synthesizer player Thomas Lehn, shares a bill with a solo bass recital by Helias.

The two-CD set, The Long Road (Auricle Records AUR 16/17 gerryhemingway.com), offers 13 examples of BassDrumBone’s cooperative talent, mostly as a trio, but like a roast improved with seasoning, adding either tenor saxophonist Joe Lovano or pianist Jason Moran on some tracks. Lovano’s expositions, which function with explosive power on BluRay and Bluish, confirm the rhythmic sides of BDB as the saxophonist’s reed vaulting doubles the trombonist’s gutbucket whinnies. Vigorously backed by slap bass and drum rolls, the tunes demonstrate how to swing heartily without abandoning technical skills, and also suggest how Anderson’s rollicking brass ensemble operates. Moran’s targeted keyboard musings help showcase BDB’s other skills as the four dynamically invest Bungle Low and Tone L with subtle colouration, balancing among individual timbral elaboration, as they take turns shadowing each others’ advances. Solidly walking or subtly vibrating throughout, Different Cities confirms how Helias sounds on his own, with the bassist given space to thrust an opulent section of arco expressions on multiple strings into the mix, finally engaging in a dialogue with the trombonist’s vocalized cries. BDB’s ability to disguise itself as a carefree jump band is given full reign on the set’s two extended live tracks as well as At Another Time. Not only does the last allow Anderson to showcase every manner of smeared and slurred tailgate tones, but Hemingway moves upfront with a spectacular display of cymbal clanks and paradiddles, reminiscent of drum masters from pioneers like Baby Dodds to the most modern stylists.

A saxophonist undeniably in tune with modern sound experiments is London-based John Butcher, who has partnered Hemingway in the past. He won’t do so at the GJF, although two other instances of his musicianship are featured. On September 15, he’ll perform with Lehn and New York pianist Matthew Shipp at the Co-operators Hall on a bill with Vancouver cellist Peggy Lee’s Film in Music. Then on September 16 at the Guelph Little Theatre, Butcher and FIM members, bassist Torsten Müller and drummer Dylan van der Schyff perform as the Way Out Northwest trio, sharing the stage with Quebec guitarist René Lussier’s MEUH. 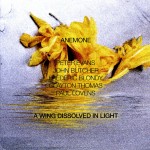 An expanded variant of Butcher’s interactive and interpretative talent is Anemone – A Wing Dissolved in Light (NoBusiness Records NBLP 105 nobusinessrecords.com), where the saxophonist is part of the band Anemone joined by bassist Clayton Thomas and drummer Paul Lovens, pianist Frédéric Blondy and trumpeter Peter Evans. Challenging Evans’ ability to attain Maynard Ferguson-like skyscraping notes, Butcher may begin his exposition with emotional cries, but moderates the interaction to harsh slurs and stuttering signs, also connecting to Blondy’s distinctive key jabbing. Meanwhile, Thomas’ string buzzes, and the metal clangs and Mylar echoes from Lovens comfortably carpet the narratives’ bottoms. Une Aile Dissoute dans la Lumiere (Part II) is a more deliberate showcase as the final sequence breaks free from Part I’s swirling cacophony. Brief reductionist solos that include a single stopped piano key, an oboe-like sour reed blat and a wooden drum plop, are emphasized. Finally, hollow reverberations from the drummer, hunt-and-peck keyboard patterns and even to-the-colours bugle-like peeps from the trumpeter combine into a languid exit. Still, a sharp whistle from the saxophonist and a hard chord from the pianist as the coda reference the dissonance that preceded the calm.

A pianist who can be tranquil or turbulent in turn is Matthew Shipp, who besides playing with Butcher and Lehn gives his own solo concert at the Co-operators Hall, September 16. Shipp is as potent a stylist in a group setting as he is a soloist, as is shown on This Is Beautiful Because We Are Beautiful People (ESP-Disk ESP 5011 espdisk.com), where the pianist, longtime confrere bassist William Parker, plus Polish saxophonist Mat Walerian, make up the Toxic trio. Anything but toxic in the usual sense, the CD’s five selections are unique, since to engage Parker’s playing of the shakuhachi as well as bass and Walerian’s use of alto saxophone, flute, and bass and soprano clarinet, Shipp debuts on organ as well as piano. The multi-keyboard is only brought out on the final Peace And Respect but like church pews now used in a bistro, it’s removed from the tinge of the chapel. Instead, the organ’s polyphonic upsurge comes in and out of focus to reflect and redefine Walerian’s harsh bass clarinet slurps and Parker’s thumping bass thwacks. Shipp reverts to piano cadences to regularize the track’s processional ending. The four tracks preceding this allow the pianist leeway to emphasize his swinging and straight sides. The tone elaboration and colouration he extracts from the piano on the title tune could easily slip into a Romantic-era concerto, despite being surrounded by solid bass pulses and dramatic runs from Walerian. Shipp’s stride-style comping eventually nudges all three into a swinging line. In sharp contrast, the low-pitched, metronomic groove that the bassist and pianist create on The Breakfast Club Day 2 has a contemplative gait, but resonates with such effortless swing that Walerian’s light chromatic clarinet flutters could come from a reborn Benny Goodman. 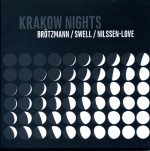 One musician never confused with Goodman is Germany’s Peter Brötzmann, who presents a solo woodwinds concert at the Guelph Little Theatre September 13. In the mid-1960s, he created an original outlook that brought free jazz advances and continental sophistication to the music, And Brötzmann is still at the height of his powers, playing a variety of saxophones, clarinets and the Hungarian tárogató. The sonic blending expressed by his small groups have been as influential as Goodman’s trios and quartets. One trio, recorded live on Krakow Nights (Not Two MW-937-2 nottwo.com), features canny American trombonist Steve Swell and commanding Norwegian percussionist Paal Nilssen-Love. Most instructive are sections of Scotopia and the massive Full Spectrum Response which feature instances of Brötzmann’s tárogató solos on the former and tenor saxophone and bass clarinet on the latter. The wooden Magyar horn brings out his emotional nature as he cruises through a selection of mellow tones. Soon enough though, with the others on side, the result is as rough and cathartic as anything else on the disc, with Brötzmann’s tone now nephritic and bellicose, a pattern he repeats when he switches to sour-toned tenor, aided by the drummer’s rolls and pops and the trombonist’s high-pitched colouration. The reedist’s Dr. Jekyll and Mr. Hyde duality has its most extended showcase on Full Spectrum Response. With an introduction built around nuanced cymbal colouration that radiates in a 360-degree angle from Nilssen-Love and Swell’s plunger cries, Brötzmann’s initial unaccompanied tenor saxophone solo is dramatic, calm and perfectly modulated, exploring every possible reed variation. But once the drummer’s pressurized clunks, plus Swell’s tremolo smears, join him, the saxophonist reacts like James Brown after the comforting cape has been draped around him during the penultimate minutes of his performance. The soul singer then shakes off the cloak to exuberantly continue singing, until the cloak goes on again. Brown again shakes it off, and the pantomime repeats until peak excitement is reached. Here, within seconds of Brötzmann screaming a fervidly wrenching solo on tárogató, he switches to clarinet for a moderato exposition, backed by drum-top scrapes from Nilssen-Love and mellow plunger tones from Swell. Then, like Brown, it appears Brötzmann can’t control himself any longer and he’s soon propelling machine-gun-like volleys of altissimo split tones. This routine, taking in the highest levels of glossolalia and the most moderate instances of flutter tonguing continues throughout the track, pinpointing Brötzmann’s stamina and repository of musical ideas. Also featured is a standout drum solo, bending, tapping and clanging every part of the kit without disrupting the proceedings with an aplomb that would have impressed Goodman associate Gene Krupa, plus both staccato forward motion and mellow elaborations from Swell. These Krakow Nights were undoubtedly memorable for the audience and presage what GJF attendees should experience. The music on these discs posits that the festival’s 24th edition could be one of the most dazzling in the festival’s history.