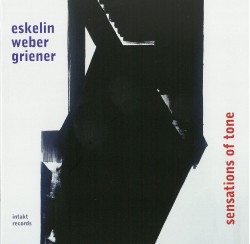 Ellery Eskelin is a brilliant inside-outside player, as adept at negotiating chord changes as he is in a free exchange of musical ideas. He’s the master of a continuously inflected, speech-like line, reminiscent of Sonny Rollins in his prime, and in Weber and Griener he has ideal partners, whether they’re supporting, challenging or peppering each other with new data. Together the three maintain open space and real momentum in a group dialogue. Leads shift comfortably in the free improvisations, whether it’s Eskelin muttering a multiphonic complaint, Weber delineating a spontaneous melody or Griener essaying the sonic recesses of his kit.

That conversational principle is just as alive when they mine the decade between 1922 (China Boy) and 1932 (Moten Swing), with Jelly Roll Morton’s Shreveport Stomp (1924) and Fats Waller’s Ain’t Misbehavin’ (1929) in between. With a playful sense of period detail, the trio imbues the songs with spontaneous wit and warmth that recall their original spirit.