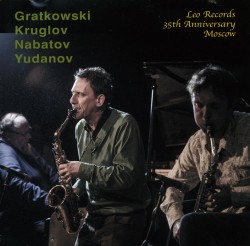 Anniversaries of record companies usually only serve as a reminder of the longevity implicit in cannily peddling particular products. But the commemoration associated with this CD is more profound. Recorded at the initial Moscow concert of a quartet consisting of two Russians – Alexey Kruglov playing alto saxophone and basset horn and percussionist Oleg Yudanov – plus Germans, pianist Simon Nabatov and alto saxophonist/clarinetist Frank Gratkowski, the five tracks pinpoint the cooperative skills of players from both countries. Providing a forum for Russian free improvisers to demonstrate their advanced expertise was one of the reasons London-based Leo Records was founded 35 years ago. That neither the Eastern nor Western players can be distinguished on the basis of talent or sound on this celebratory disc is a tribute to the label’s ideas.

Russian-born and American-educated Nabatov provides the perfect linkage among the band members. The grandeur of his cascading runs on Our Digs for instance, creates emotional underpinning for the reedists’ atmospheric whispering; plus his emphasized wooden key stops provide the climax. At the same time he clatters phrases on the keys and slams the instrument’s frame to amplify the piano’s percussiveness on Homecoming, locking in with Yudanov’s smacks and rolls, never unduly forceful in themselves. Marathon-speed chording also adds to the saxophonists’ expositions that mix harsh Aylerian smears with reed textures as broad as wide-bore scanners. While as indistinguishable as corn stalks in a field, when alto saxophone bites emanate from both players, identifying resonation distinguishes Gratkowski’s bass clarinet and Kruglov’s basset horn on the reed showcase Hitting It Home. Exchanges between the Russian’s warbling yelps and the German’s sonorous hums that could be sourced from an underwater grotto are ornamented by the pianist’s ringing timbres and shaped into a pleasing narrative.

Since outsiders rarely associate Germans or Russians with humour, House Games is particularly instructive, when the woodwind players’ choked yelps and snarling pants make the exposition sound like an aural Punch and Judy show – and just as violent. However this tongue splattering and note spewing is eventually harmonized into a manageable melody by the pianist’s romantic interludes.

Overall, Leo’s more than three-decade-old promise is fulfilled with a connective session such as this one.