With music like the other arts increasingly focused on known quantities, recorded salutes to jazz greats have almost become a subcategory of their own. If the world needs another record of Beethoven, Mozart, Elvis or Sinatra, then saluting Ellington, Trane or Miles one more time shouldn’t be a dilemma. But more erudite improvisers realize the music’s wider reach, and if they opt to honour innovators, as on the CDs here, choose lesser-known but equally important stylists.

Prize of the group is saxophonist Roscoe Mitchell’s Celebrating Fred Anderson (Nessa ncd-37 nessarecords.com). Here, one of the founders of Chicago’s influential Association for the Advancement of Creative Musicians (AACM) honours another of its founders, tenor saxophonist Fred Anderson (1929-2010) by playing two of Anderson’s and four of his own compositions. Backed by other AACMers, cellist Tomeka Reid, bassist Junius Paul and drummer Vincent Davis, Mitchell, 75, a more experimental stylist than Anderson, uses the narrow, near-Oriental timbres of sopranino to liberate Anderson’s Bernice and Ladies in Love from the older saxophonist’s freebop conceptions. As Davis’ cymbal smacks sprinkle intermittent tones like flowers on a tombstone, Mitchell uses the natural melancholy from Reid’s instrument plus his sax’s nipped tones to convert Bernice into an effective threnody. In contrast, Ladies in Love moves from a respectful moderato melody to Morse code-like beeps, expressed by near replication of infant cries from Mitchell plus staccato counterpoint from the cello. Emphasized is the rainbow-like expressiveness of the theme’s powerful colours. Hey Fred is the session’s highlight. During its 17-minute length Mitchell expels staccato alto saxophone timbres with the ferocity of a lightning storm, while Paul’s thundering stabs and slants pace his string tones. As laboratory scientist-like Mitchell exposes melody permutations, Reid contributes arco extensions and Davis a continuous pitter patter. Crucially, the climax is reached when circularly breathed saxophone pitches blend with distinctively scattered arco swipes from both string players. Confirmed is the abiding power of, plus the continued sonic research involved in creating, the sounds that Anderson and Mitchell helped nurture. 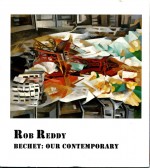 Cello, soprano, bass and drums are also featured in a salute to another deceased saxophonist, also using a combination of his compositions and others written especially for the date. But soprano saxophonist Rob Reddy’s Bechet: Our Contemporary (Reddy Music RED 003 robreddy.com) resembles neither Celebrating Fred Anderson nor a reproduction of the music of New Orleans-born soprano saxophonist Sidney Bechet (1897-1959). Like theatre companies which perform modern variations on Shakespeare’s plays, Reddy re-orchestrates the timeworn pieces into something contemporary. Case in point is Chant in the Night expanded from Bechet’s rickety-tick, under-three-minute reed showcase to a 15-minute exercise in counterpoint between trombonist Curtis Fowlkes’s protracted slide smudges and hard-punching almost rural licks from Marvin Swell’s guitar. Encircled by flashing swipes from violinist Charles Burnham and cellist Marika Hughes plus amalgamated horn riffs, the end result piles burnished tones atop one another creating a unique structure that’s both traditional and futuristic, especially when a Theremin-like twinge signals the end. Trombone and trumpet vamps predominate on Petite Fleur. But like a ballet dancer who surprises by executing a faultless cha cha, rather than the familiar theme coming from Reddy’s soprano, it’s instead given a memorable reading by Burnham. Two other Bechet tunes are strutting expositions, although Pheeroan akLaff’s Gene Krupa-like hollow wood block smacks on Broken Windmill may be more trick than tribute. Reddy’s portion of the tunes is as high class, with Erasing Statues making room for bottleneck guitar-like sonorities within a ring-shout-like accompaniment; while luculent horn multiphonics modernize the yearning blues licks from Sewell that introduce Yank.

Taking the concept one step further is cellist Erik Friedlander whose Oscalypso (Skipstone SSR22 skipstonerecords.com) consists of nine compositions by cellist Oscar Pettiford (1922-1960), one of the first to introduce that orchestral instrument to jazz. Throughout Friedlander and company – tenor and soprano saxophonist Michael Blake, bassist Trevor Dunn and drummer Michael Sarin – interpret the tunes with restrained, unselfconscious swing, that could be called cool, but with a harder edge. Sarin, for instance, never thunders, but outputs a constant pulse that ranges from clipping rim shots on the title tune that are answered by spiccato bowing from Friedlander and narrowed note spearing from Blake, to near-Afro-Cuban conga replications on Sunrise Sunset that encourage dance-like flutters from the saxophonist. Supple and relaxed, the cellist’s and reedist’s timbres intersect often, like the conversation of fraternal twins. They can do so at warp speed as on Pendulum at Falcon’s Lair, with its familiar-sounding melody studded by (Stan) Getzian euphony from Blake, or in full balladic mode with the slowly building Two Little Pearls. Tongue-trilling tremolos from the saxophonist are egged on by the cellist’s string sweeps as Dunn strengthens the rhythmic bottom as he does throughout. Expressively romantic playing arco as any cellist facing the Impressionistic repertoire, yet as rhythmically exciting plucking pizzicato as any guitarist in a swing combo, Friedlander not only confirms his talents and those of the quartet members, but flags the continued adaptability of Pettiford’s compositions to contemporary sounds. 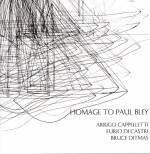 Canada’s second best-known jazz pianist is the subject of another salute: Homage to Paul Bley (Leo Records CD LR 732 leorecords.com), but Italian pianist Arrigo Cappelletti has taken the oddest way to frame his admiration for someone he lists as one of his chief inspirations. Cappelletti, who teaches at Venice’s Music Conservatory and has played with Bley associates like drummer Bill Elgart and bassist Steve Swallow, plays mostly his own music here. Of the three tunes not by Cappelletti though, one was composed by Andrew Hill, two were composed by Thelonious Monk. There’s probably some perverse Mediterranean logic at work here. Although none of the 13 tracks are Bley compositions, the pianist, assisted by bassist Furio Di Castri and drummer Bruce Ditmas, both of whom worked with Bley, writes short, weedy lines that compare to the Canadian’s work. Unlike Bley’s note economy though, the Italian’s style is much busier, even on the title tune. The multi-note textural exposition he specializes in is reminiscent of someone making sure to spread jam on every single millimetre of his toast. More crucially, the pianist’s synergy with his bassist is as pronounced as Bley’s was with his sidemen. Tracks such as the stop-and-go Bluesy and Refugee Blues find the two playing pitch and catch with the themes, with blues expressed only by inference. Meanwhile on the introspective Ashes, Cappelletti appears to be answering every chord he plays himself; and on the slow-moving and stately Coral creates a sense of unfolding drama which perfectly presages the Monk medley that follows it. While Cappelletti’s touch is also not spare enough to meet Monk’s idiosyncrasies on Pannonica & Crepuscule with Nellie, the luxurious elegance he brings to his own compositions is imposing. DiCastri’s bowed bass line adds expressive deep tones to Durate, as Ditmas’ molasses-slow rolls maintain the tune’s ambulatory momentum; while the almost endless thematic development the three bring to Dialogue invests it with a scanty romanticism, characterized by piano-key dusting and the drummer’s patterning smacks. 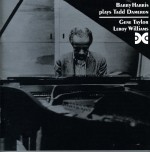 An identical format was used in 1975 by pianist Barry Harris’ trio to pay tribute to a composer-arranger-pianist, whose achievements were even at that early date in danger of being forgotten. Plays Tadd Dameron (Xanadu Master Edition 906071 elemental-music.com) with bassist Gene Taylor and drummer Leroy Williams was the first – and for many years the only – disc given over to classics by Dameron (1917-1965), whose tunes such as Hot House and Our Delight defined bebop. Harris, whose harmonic adroitness is in many ways comparable to Dameron’s, stresses both the melodic and rhythmic parameters of these tunes. With Taylor string interpolations shadowing him like a guide dog with his master, the pianist’s interpretations are more buttoned down than the originals, but this controlled session also lacks spectacular front men like Fats Navarro and John Coltrane, for whom the tunes were first composed. Yet by separating these eight classics from their initial recordings, Harris burnishes the composer’s reputation. For instance his evocative version of If You Could See Me Now, initially recorded by Sarah Vaughan, adds a wash of colourful breaks to the ballad like nuts sprinkled on caramel chocolate. Soultrane, first recorded by Coltrane, is modulated into sophisticated smoothness with the floating beat encompassing pure emotionalism. Meanwhile the assured treatment of the frequently recorded Ladybird is allowed to float freely until double-timing bass work and an elliptical keyboard coda confirm its individuality. Even the lush Casbah is dappled with rhythmic quotes and humour to strip out the false exotica so that the melody stands on its own.

Forty years ago Harris, now 85, showed that memorable jazz was made by more than a handful of great composer/performers. Today, canny players are further exposing inventive compositions by lesser-known creators. With more colours and contours in place, a fuller picture of the music emerges.