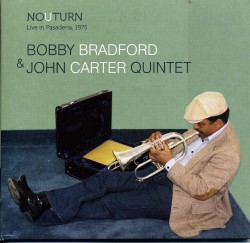 Two of his earliest associates demonstrate how thoroughly Ornette Coleman’s concepts of freedom had penetrated the music’s lingua franca, in this 1975 never-before-released concert from Pasadena. Profoundly analytical, yet with an animated pulse, cornetist Bobby Bradford – an on-off member of Coleman’s quartet for years – and influential clarinetist and soprano saxophonist John Carter, divide the compositional chores during nuanced performances that are craggy and irregular as a mountain path, but always explicit in direction. Pointedly using two basses – Roberto Miranda and Stanley Carter – at times playing arco, the results suggest the calmness of a chamber intermezzo, though drummer William Jeffrey’s dislocated rhythmic accents keep the sounds edgy as well as swinging.

Consider how the fluent clarinet passages arch over the others’ notes, while playing in near tandem with the cornet bringing up pseudo-Dixieland memories on the concluding Circle for instance. Still chiming double-double bass line and a freer percussion tempo confirm the tune’s modernity, a certainty strengthened by Bradford’s sky-high blasts and Carter uniquely exploring the woody qualities of his horn. This sense of continuum plus imminent discovery permeates the four other tunes, especially one like She. Initially developed from a series of slurred grace notes from both horns, its passionate mood is maintained by euphonious string motions and the drummer’s positioned rim shots. After Carter’s syncopated tremolos set up a counter melody, he joins Bradford’s melancholic chirps for a dual coda of heart-breaking sighs.

Like Coleman who died this June, Carter (1929-1991) is no longer with us; but Bradford is still going strong at 80. Both Texans, again like Coleman, singly and together the co-leaders demonstrate how sound deconstruction isn’t frightening, as long as it, like Coleman’s concepts, is coupled with a direct rhythm. No U Turn may be the paramount expression of this truism.