Perfection isn’t usually in the equation for jazz recordings, but guitarist Reg Schwager’sDelphinus (Rant 1447, nette.ca/jazzfromrant) comes very close, with a balance of polish, spontaneity and depth of expression. Schwager draws much of his inspiration from Northern climes (the same that feed the aesthetic of ECM records), evident on the opening Resolute (named for the Nunavut town) and the title track (named for a Northern constellation) and reaching its apotheosis on The Lonesome Scenes of Winter, a stunning treatment of a strongly modal folk ballad. Schwager’s music is filled with the crystalline clarity and bright highs of sunlight glancing off ice and starlight far from cities, and it extends to the rest of his quartet, pianist Don Thompson, bassist Neil Swainson and drummer Michel Lambert, a group that can move comfortably from Jerome Kern’s They Didn’t Believe Me to the free jazz of Schwager’s Four Eyes.

Bassist Rob Clutton stands out for the breadth of his affiliations, working regularly from the mainstream (pianist Steve Koven’s trio) through free jazz (Drumheller) to experimental electronica (Lina Allemano’s Titanium Riot). He’s also a highly creative bandleader when he assumes the role, amalgamating elements of free improvisation, electronica and folk music. They’re all evident on The Cluttertones’ Ordinary Joy (Healing Power Records HPR#30 healingpowertoronto.bandcamp.com), sometimes on a single track. Working with longtime associates Allemano on trumpet; Ryan Driver on analog synthesizer, piano and voice (a reedy high tenor reminiscent of Robert Wyatt’s); and Tim Posgate on guitar and banjo, Clutton composes pieces that begin with the improbable and sometimes approach the uncanny, strange states of musical mind in which the heterodox elements seem to tune calmly to a new standard. The nine-minute Agosto is a fine example, Clutton’s warm, springy, lyrical pizzicato blending through and linking the divergent impulses of banjo, trumpet and synth. 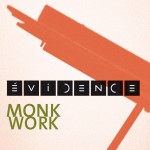 Monk Work – Évidence (Ambiances Magnétiques AM 218 ambiancesmagnetiques.com). The compositions of Thelonious Monk represent a unique body of work in the jazz canon, pieces that have been explored repeatedly by musicians from mainstream to avant-garde, many finding something new in Monk’s quirky puzzles of rhythm and harmony. Among the most dedicated advocates is the Quebec trio Évidence, consisting of electric bassist Pierre Cartier, saxophonist Jean Derome and drummer Pierre Tanguay who together have been exploring Monk’s music since 1985, and who in 2014 interpreted his complete works in a three-day Montreal marathon. Évidence brings its own voice to this selection, mixing and matching the familiar and obscure in Monk’s repertoire. Stylistically Évidence invokes another master, Ornette Coleman, with Derome developing a similar lyricism while the rhythm section work masterfully through the kind of flexible, sprung rhythms that distinguished Coleman’s early work. Derome plays baritone on Coming on the Hudson with a wry wit akin to Monk’s own, while Cartier maintains fluid rhythm and Tanguay sustains the mood with light, crisp, animating brushwork. Derome’s vocalic alto comes to the fore in the fine three-way dialogue of Skippy. 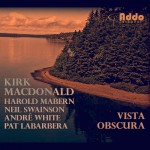 Kirk MacDonald is a powerhouse tenor saxophonist whose mature style matches fierce rhythmic drive with focussed emotion and the sound of controlled aggression. His latest CD, Vista Obscura (Addo Records AJR025, addorecords.com), is a career high, winner of the 2015 JUNO award for Jazz Album of the Year, Solo. It presents MacDonald with the stellar rhythm section of bassist Neil Swainson and drummer André White, veteran American pianist Harold Mabern adding a special drive to the proceedings as well as his own animated solos. The CD is largely focused around MacDonald’s effective originals, but there’s also a special dimension to the set. Every September, MacDonald and fellow tenor saxophonist Pat LaBarbera pay homage to John Coltrane’s genius at Toronto’s Rex Jazz and Blues Bar. Here MacDonald opens with an intense, faster-than-usual trip through Trane’s Lonnie’s Lament; LaBarbera joins him for three tunes here: one is a brilliant extended version of Naima, Coltrane’s best-known ballad, entirely worthy of the Coltrane legacy.

MacDonald and LaBarbera (along with Mike Murley and Perry White) have long set a standard for mainstream Toronto tenor saxophonists – as educators as well as performers – and the legacy is evident in two very different players who have recently emerged. Dave Neill and Johnny Griffith are both graduates of the Master of Jazz Performance program at the University of Toronto (where Murley teaches), and both teach at Toronto’s Humber College.

Dave Neill’s Daylight (On the Fly Records OTF112844, daveneill.ca) is marked by his distinctive, warm, round sound, thoughtful solos and compositions, developing a reflective, almost orchestral sound with his quintet. He’s used the same rhythm section since his 2008 debut, the fine combination of pianist David Braid, bassist Pat Collins and drummer Anthony Michelli, adding trombonist Terry Promane here. Neill has creatively shaped the session with four brief variations of his Thelonious Monk-like The Day Savers, played in duet with Braid and interspersed throughout the program. He also includes pieces by Promane and Braid, outstanding composers/arrangers of improvisation-friendly music. Braid’s Red Hero is a powerful, elegiac work that matches the depth of Kenny Wheeler and Gil Evans, a distinctive tradition with a strong Canadian component.

For all the similarities, Johnny Griffith sounds very different on Dance with the Lady (GB Records johnnygriffith.com). He’s a more kinetic player, far less deliberate, pushing toward a raw expressionist edge, showing affinities with John Coltrane and the ancestral energies of rhythm & blues. He shares the front line with trumpeter Jeremy Pelt, a star in the New York mainstream firmament. It can be risky, but it works here, with Pelt, pianist Adrean Ferrugia, bassist John Maharaj and drummer Ethan Ardelli making consistently lively, well executed music. The menacingly themed The Kuleshascope is a highlight, with Griffith pressing further and further out.