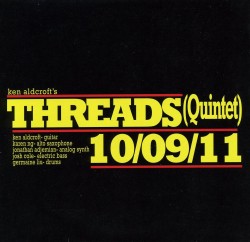 Every since he arrived in Toronto from his native Vancouver in 2001, guitarist Ken Aldcroft has been a constant presence on this city’s improvised music scene. Whether helping to organize concerts, teaching, playing solo gigs or as part of ensembles of varied sizes, he’s constantly exceeding expectations of what jazz involves. Also exceeding expectations is the first CD by his newest ensemble, which presents this music in concert at Jazz at Oscar’s this month.

Having recorded six CDs with his regular Convergence combo, Aldcroft changes gears on 10/09/11 by supplanting its free-bop orientation for one that offers more space and an almost unmetered beat. Besides Aldcroft, the only Convergence holdover is alto saxophonist Karen Ng, with the band filled out by drummer Germaine Liu plus the characteristic grooves of Josh Cole’s electric bass and Jonathan Adjemian’s analog synthesizer. With each of Aldcroft’s three originals entitled Threads plus a numeral and the disc recorded in 2013, it’s likely the CD title refers to a time of inspiration and composition.

Essentially each of the longish tunes, clocking in at between 18 and almost 25 minutes, showcases varied facets of the quintet. With percussion pulses that slide from parade band whacks to (Canadian) Indian-like rattling and back again, Threads III is the gentlest of the three, with slowly evaporating sax slurs matched with echoing guitar timbres. Threads I has more energy. Here Aldcroft’s crescendo of arpeggiated string licks faces tough, angled reed bites and buzzing synth interjections. Underneath, Adjemian’s staccato blurts plus Liu’s bass drum pops replicate an Upper Canadian version of a Second Line rhythm. Lengthiest of all, the introductory Threads II defines the quintet’s distinct parameters. Harmonized bass and guitar strums steady the beat, leaving enough openings for Ng’s blazing staccato cries, Liu’s irregular thumps and ruffs plus synthesizer fills that at points resemble Morse code, at others what an electric piano would sound like with a cold. Aldcroft’s twangs plus Ng’s volatile tone nudge the narrative towards a satisfying climax.

A notable achievement from an ensemble that offers sonic maturity as it’s in the process of being created.

Concert note: The THREADS (Quintet) is in concert at Jazz at Oscar’s, Hart House University of Toronto January 16.