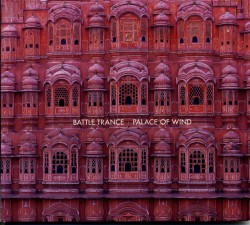 Battle Trance may be a quartet of tenor saxophonists, but banish from your inner ear the smooth reed sounds of The Four Brothers or more experimental foursomes like ROVA. Instead the Brooklyn-based ensemble, which plays at Arraymusic  on September 5 (155 Walnut Ave, 416.532.3019), specializes in a more difficult type of interaction.

An interconnected three-part composition by leader Travis Laplante, Palace of Wind wasn’t notated, but taught orally to the other players: Matthew Nelson, Jeremy Viner and Patrick Breiner. Laplante, whose improv experience includes the band Little Women, uses the harmonic conventions of jazz only as a bonding mechanism. Setting up the sequences, unaccented buzzing, tinges of folk melodies and contrasting expositions, singular, unison and with the other saxes’ organ-like chords cocooning the soloist, are put into play at various times. Similarly the narrative moves from gentle, barely audible whispers to crescendos of fortissimo timbres. Utilizing all parts of the woodwind(s), specific passages concentrate on the highest alto-like register of the horns or guttural, baritone-like lowing. But no tone predominates; and there’s always underlying textural bonding. Consistently deconstructing and rebuilding the themes, near pastoral sections are succeeded by ferocious blow-outs with split tones and irregular vibrations cascading every which way. Then just as often, intricate, overlapping unison playing arises.

Reaching a climax in the final minutes of the third and lengthiest section, the concentrated reed drone becomes so intense it’s almost visible. Just as quickly though this basso-range wallowing is succeeded by wispy reed airiness that guides the piece to its conclusion, with the horns and program still accurately and memorably harmonized.

This CD, and the upcoming performance, promise air currents you probably won’t want to miss hearing.