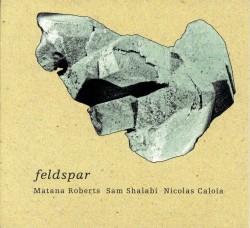 Titled after the rock formations found in the earth’s crust, Feldspar is as rugged as it is remarkable. Naming each of the seven tracks for terrestrial minerals, the tunes confirm not only the attractive results but also the hard work that goes into their production.

Not that there is anything laboured about the program. On it American alto saxophonist Matana Roberts, who recently won a Herb Alpert Award in the Arts for risk-taking, mid-career artists, turns away from her long-term Coin Coin project to interact with two Montrealers: guitarist Sam Shalabi and bassist Nicolas Caloia. Playing together as if they have done so for years, the three evolve a strategy that could almost be a fanciful vaudeville routine between an exuberant and an unruffled comedy team. With Caloia fancifully standing near the wings, only adding tensile thumps when needed for further direction, the saxophonist spins out lightly accented, straight-ahead timbres, while the guitarist uses every manner of string, amp and knob distortion to vary the interface.

At points Roberts responds to his sonic goading with double-tongued or slap-tongued interjections which challenge then blend impressively with Shalabi’s crunches, buzzes and distended flanges. And with the reedist in perfect control at all times, the program works its way to unearth different sparkling imaginary mineral formations to reach a climax with the final title track. As bass string stopping becomes more prominent, Roberts’ previously long-lined flatness turns to emotional altissimo at the same time as Shalabi’s meandering timbres stabilize into rhythmic string clipping and a conclusive banjo-like clang.

A utilitarian rather than a trifling listen, concentrating on the sound production here will yield the same multi-faceted rewards that concentrated hard-rock mining does in other situations.