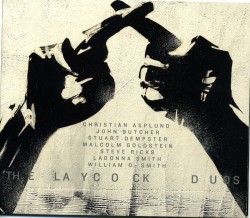 High quality souvenirs of a unique Improviser Residencies program at Utah’s Brigham Young University, the five performances on this CD not only demonstrate the creativity of accomplished international players, but also the clever interaction of each with pianist/violist Christian Asplund. A native of Kingston, Ontario Asplund has taught at BYU since 2002.

Although there’s conceptual rapprochement between Asplund and instrumentalists such as clarinetist Bill Smith and trombonist Stuart Dempster whose expertise is more on the new music side of the continuum, the less stiff and more sympathetic pieces here involve full-time committed improvisers. Lengthier than any of the other tracks at nearly 20½ minutes, The Secret Substance finds Asplund using extended techniques to complete British tenor saxophonist John Butcher’s staccato-to-mellow output. Strummed piano keys meld with continuously breathed timbres at some points; as do sprawling, sul ponticello fiddle slices with reed tongue slaps at others. The end results produce dual resonations that widen the dynamic range as they meld.

With an appeal to listeners of any stripe who appreciate well-played, brainy improvisations, The Laycock Duos from Provo, Utah proves once again that unprecedented adventurous sounds can appear from unexpected locations.