Twenty years after its modest beginning, the Guelph Jazz Festival (GJF), which this year takes place September 3 to 8, has grown to be one of this country’s major improvised music celebrations. Unlike many other so-called jazz fests which lard their programs with crooners masquerading as jazz singers, tired rock or pop acts, or so-called World or C&W performers who make no pretence of playing jazz, the GJF continues to showcase committed improvisers in sympathetic settings including during the fourth installment of the dusk-to-dawn Nuit Blanche.

Perhaps the most celebrated innovator at the GJF is trumpeter Wadada Leo Smith. His Golden Quartet, which shares a double bill at the River Run Centre (RRC)’s main stage September 7, performs a variant of his classic Ten Freedom Summer suite, shortlisted for this year’s Pulitzer Prize in music. Part of that program was recorded with an orchestra, and you can get an idea of Smith’s structural blending listening to Occupy The World (TUM CD 037-2 tumrecords.com) as the 21-piece TUM Orchestra (TUMO) interprets another Smith composition. The selections’ intricate arrangements serve not to frame Smith’s muted brass flurries, which bring Miles Davis-like ballad mastery into the 21st century, but open up to the talents of the mostly Finnish orchestra. You can hear that on the title track when the trumpeter’s tale told through rubato grace notes and squeezed triplets is matched with tom-tom-like passages from TUMO’s three percussionists, followed by massed polyphony pierced by legato strings, a tremolo harp sequence and Smith’s conclusive brassy and heraldic tones. The Golden Quartet’s bassist John Lindberg is soloist on Mount Kilimanjaro, where his magisterial double and triple stopping establish a staccato pantonality which encourages the five-person string section to abandon legato thrusts for stirring sweeps, and despite being performed at warp speed, encourages a satisfying orchestral mosaic. Leaving space for split-second sonic blasts from the entire band, before the warm and welcoming conclusion, Lindberg joins the other tremolo strings for a sequence of scrubs and sweeps. Incidentally, Swedish tenor saxophonist Fredrik Ljungkvist, part of the Atomic band, which is at the RRC’s Co-operators Hall September 4 during the GJF, is one stand-out on Queen Hatshepsut when his bravura churning and almost vocalized tenor saxophone lines make a perfect pantonal contrast to pointillist smears from accordion and piano.

Balancing a delicate outer shell with a steely core, American flutist Nicole Mitchell is another major improv figure whose Indigo Trio plays St. George’s Church’s Mitchell Hall September 5. A similar configuration with bassist Joshua Abrams and drummer Frank Rosaly expands with additional colours on Aquarius (Delmark DE 5004 delmark.com) when the three and vibraphonist Jason Adasiewicz make up the Ice Crystal band. What Herbie Mann’s combo could have sounded like if he had ignored rock-pop blandishments, even Mitchell’s blues and Latin tunes trade simplicity for sophistication as four-mallet, bell-like tones from the vibist and her gruff tremolo gusts are as linear as they are lyrical. Other pieces such as Above the Sky reflect mood rather than linearity, borne on metal-bar smacks and swooping flute flutters. Another standout, Sunday Afternoon has a pastoral title, yet adds Chicago grit to become a straight-ahead swinger, following Abrams’ stentorian solo that expands into string multiphonics while maintaining a steady pulse. Meanwhile the rhythmic adaptability of Rosaly is succinctly showcased on Adaptability. He proves that a program of rim shots, rolls and pops doesn’t retard the beat but instead underlines the metallic origin of the other instruments Adasiewicz and Mitchell transform with extended techniques, to soar and bounce as well as peep and resonate. 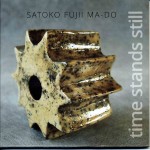 Another inventive figure is pianist Satoko Fujii, whose French-Japanese Kaze Quartet is at the RRC’s Co-operators Hall on the morning of September 7. Kaze trumpeter Natsuki Tamura is also featured on Time Stands Still (NotTwo MW 897-2 nottwo.com) along with Fujii, bassist Norikatsu Koreyasu and drummer Akira Horikoshi as the quartet Ma-Do. Anything but Orientalist, except for some taiko-like thumps from Horikoshi and Koreyasu’s erhu-like patterning during the appropriately titled Broken Time, Fujii’s concepts are closely aligned to bedrock jazz plus inferences from so-called classical music. That tune accelerates to a layered swinger with strummed chords and glissandi from the pianist plus a Gabriel-like open-horn trumpet solo. Relaxed excitement is the touchstone of North Wind and the Sun on the other hand, where Tamura’s moderated linear exposition turns to sibilant lip bubbling as Fujii’s double pumping and circular chording plus sweeping bass lines engender friction but never break the chromatic line. In contrast Set the Clock Back is almost formalist with Chopinesque keyboard touches and legato note construction from the trumpeter. Outstanding and more experimental are Koreyasu’s a cappella string shakes which redirect the tune so that following his solo, when the head reappears, it too is more tremolo and agitated.

Outstanding double bass work from closer to home is on tap during a free Market Square afternoon concert that same day when Montreal bassist Jean Félix Mailloux performs his compositions from Bomata – Arômes d’allieurs (Malasartes mam 016 malasartesmusique.com) with his associates, percussionist Patrick Graham and Guillaume Bourque playing clarinet and bass clarinet. A trio which has internalized “scents from elsewhere” – the translation of the CD title – Bomata’s unhurried performances reference various ethnic styles without becoming subservient to any. A fine instance of this mixing is Cardamome when cross pulses from Graham and second drummer Phillippe Melanson move contrapuntally alongside a walking bass line, providing a trembling rhythm to Bourque’s mid-range, Klezmer-like overlay. The reedman’s mercurial high-note skill is on display on Shaman, with the bass taking on a slinky oud-like resonance and guest frame drummer Ziya Tabassian adding hard thwacks to toughen the beat. Yet as intense as the bassist’s and clarinettist’s improvisations become neither disrupts the basic thematic flow. Pianist Jérôme Beaulieu, who joins Bomata on a couple of tracks, is a little too decorous, creating a crystallite Nordic feel which clashes with Bourque’s ney-like sound on Nuit Blanche. Although with 13 tracks, sameness sets in at points, most performances argue well for the band’s continued evolution from this 2012 CD. Chinoiseries could offer one path, with the arrangement open enough to allow the reedist some altissimo smears even as the theme stays linear, with the end product suggesting both Eastern European concertina-like riffs plus a swinging jazz-like interface.
fShare
Tweet