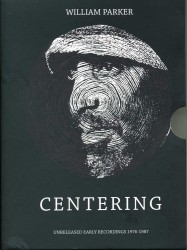 When New York’s now justly famous Vision Festival first took place in 1996 committed jazz fans greeted the event as if they were witnessing a full-fledged musical resurrection. So many advanced players of unbridled free form and experimental sounds were involved that the annual festival soon became a crowded week-long summer happening. Ironically — which was one reason for the Fest’s popularity — these probing sounds and its players were supposed to have vanished after the revolutionary 1960s, superseded first by jazz-rock pounders’ simple melodies and then jazz’s young lions who aped the sounds and sartorial choices of the 1950s — both of which had major record label support. Still, asbassist/composer/bandleader William Parker’s Centering: Unreleased Early Recordings 1976–1987 (NoBusiness NBCD 42-47 www.nobusinessrecords.com) aptly demonstrates, experimental sounds never vanished; they just went underground. As the 24 often lengthy tracks that make up this 6-CD set of hitherto unreleased material substantiates in its breadth of performances, sonically questing players were improvising and composing during those so-called lost years. But it took the founding of the Vision Festival by Parker and his wife, dancer/choreographer Patricia Nicholson, to provide the proper medium for this work. Major stylists such as saxophonists Charles Gayle and David S. Ware, vocalist Ellen Christi and trumpeter Roy Campbell, all of whom are represented in the set, would go on to mentor a multiplying groundswell of younger rule stretchers and future Vision Fest participants. Also, despite being professionally recorded, the conservative climate of the times, plus the cost of producing and distributing LPs, left the tapes used for these CDs stacked in performers’ apartments. Now the belated release of Centeringfills in a blank in jazz history, equivalent to what coming across a cache of unreleased John Cage or Morton Feldman recordings would do. Included in the package is an attractively designed 66-page paperback book with vintage photos, posters and sketches along with essays discussing the background of the sessions, the musicians’ experiences and the New York scene.

From a historical perspective the most valuable artifacts are those which feature Parker playing alongside saxophonists who are now major influences in the international avant garde. From 1980 the bassist and alto saxophonist Daniel Carter are involved in musical discussions which make up for their lack of nuance with brilliant and mercurial playing, eviscerating every timbre and tone that could be sourced from their instruments. As Parker’s chunky rhythms hold the bottom while simultaneously rubbing and stopping strings to produce unique interjections, Carter ranges all over his horn. On Thulin, for instance, multiphonic split tones, triple tonguing, barks and bites are just the beginning of the saxophonist’s agitated interface. Working his solo into a fever pitch of altissimo cries and freak notes, he often sounds as if he’s playing two reed instruments. Eventually Parker’s juddering percussiveness grounds the track, angling the two towards a finale, but not before an extended a cappella passage by the bassist, where his multi-string sinewy strokes expose timbres that could be created by a string quartet. Contrast that with the beefy pedal point Parker uses on the two 1987 tracks with tenor saxophonist Gayle. After the reedist’s almost continuous overblowing exposes snarling altissimo or nephritic guttural tones, Parker asserts himself on Entrusted Spirit with tremolo strums and slaps which echo sympathetically alongside Gayle’s expansive multiphonics. Finally the saxman’s pressurized snarls and mercurial split tones are muted to an affiliated moderato tone by smooth pizzicato lines from Parker, bringing wood tapping and top-of-range angling into the mix.

Equally instructive, tenor saxophone Ware and Parker, who would become one half of Ware’s celebrated quartet in the 1990s, recorded with drummer Denis Charles in 1980 as the Centering Dance Music Ensemble. Unlike earlier Parker compositions on this set performed by string or vocal-based ensembles to back up Nicholson’s choreography that seem overly notated and more distant, the Ware-Parker-Charles creations are vibrant free jazz that may have caused repetitive strain injuries among dance company members. Highpoint is the inclusive and contrapuntal Tapestry. Here the saxophonist’s juddering smears and expansive reed vibrations, Parker’s focused slaps and Charles’ bass drum thumps are individually showcased then smartly combined into a tremolo vamp that descends into satisfying cohesion. Edifyingly demonstrating that the so-called avant-gardists celebrated the tradition is One Day Understanding. With a dirge-like middle section where Ware directly quotes an Albert Ayler head, the exposition and conclusion allow the saxman full range for glossolalia, spinning split tones and fervid overblowing effectively honouring saxophone titans like John Coltrane and Ornette Coleman by inference. Parker’s sputtering spiccato slices relate to Henry Grimes’ and Jimmy Garrison’s liberation of the bass role; while Charles, whose military-style rebounds and hard backbeat helped define free jazz in the late 1950s, just plays himself. 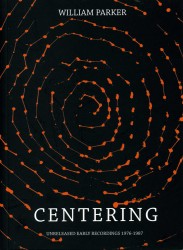 Even more germane to contemporary experimenters who frequently amalgamate into large-scale improvisational ensembles are two other Parker-led groups. Both 1979’s eight-member Big Moon Ensemble and 1984’s 13-person Centering Big Band are links between Coleman’s Double Quartet and Coltrane’s Ascension band and today. Vaulting between inchoate and inspired, the Big Moon tracks are polyrhythmic, polytonal and polyharmonic with the instrumental tessitura stretched to make room for thundering solos from the likes of Carter and Campbell plus trumpeter Arthur Williams and altoist Jameel Moondoc. On tunes such as Hiroshima Part Two and Dedication to Kenneth Patchen the cumulative effect of the multi-colored free-form cascading is intensified by aboriginal war whoops and unbalanced screams from the band members as they play. Tremolo triplets from Campbell meet Williams’ capillary flutter tonguing on Patchen, as Moondoc’s juddering split tones contrast with Carter’s leaping glossolalia. With Charles and Rashid Bakr both thrashing percussion, Parker and fellow bassist Jay Oliver stroke manfully to finally downshift the collective cascading, only to have it revive with increased ferocity on Hiroshima. Stacked horn parts encompassing stop-time screaming and pressurized vibratos are strung out during this nearly 50-minute piece as each musician seems to be trying to outdo the other in ferocity. Instructively the bassist’s later experiments with world music improv are adumbrated in a protracted sequence when his string strumming and the percussion work sound as if they’re emanating from a koto and a taiko drum.

There’s no mistaking the jazz inflections on the five big band selections however. But their modernity is apparent in the resourceful balance among intense riffs from the five saxophones, Parker’s time-keeping plus percussionist Zen Matsura’s cymbal clanks and press rolls as well as stacked and cascading vocal interchange from Christi and fellow vocalist Lisa Sokolov. Intense, heraldic triplets from trumpeters Campbell and Raphe Malik add to the churning excitement of tunes like Munyaovi, as first the snorting reeds then the brass section’s triplet expansion match the vocalists in staccato invention. The overall effect isn’t unlike Count Basie’s band at full force playing a swing riff. Space is furthermore made throughout for comforting trombone slurs, twanging rhythmic sequences from Parker and, on Tototo, an alluring balladic line from Moondoc. That piece climaxes with a polyphonic entanglement of the drummer’s harsh ruffs and flams, screaming penny whistle-style brass shrills and guttural baritone sax honks, completed by a slithery sax line that coalesces with harmonized voices.

The big band selections were taped at the 1984 Kool Jazz Festival, one of Parker’s rare high-profile gigs. It may have taken another dozen years to organize the Vision Festival and find the multiplicity of gigs and recordings Parker and his associates now participate in, but this momentous box set confirms that all along experimental music’s foundation was being cultivated slightly out of the public eye.