Solo playing has always been the make-or-break yardstick for pianists of any genre. That’s solo playing not playing solo, an important distinction which differentiates between exhibiting showy breaks and having an overall musical plan for the mini-orchestra that is at his or her fingertips. The solo challenge is more pronounced for improvisers since even if they’re interpreting compositions, originality is the paramount concern. These challenges don’t prevent pianists from trying their hands at solo sessions. But it’s instructive to note that the memorable ones, such as the piano dates here by an American, a Canadian, a Catalan and a Russian, use different strategies to attain matchless quality. 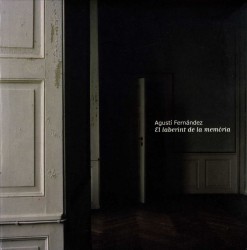 Agustí Fernández’s El laberint de la memòria (Mbari Musica MBARI 04 www.mbari­musica.com) is the closest to what many expect from a solo recital. That’s because the Barcelona-based pianist, best-known for his improvisational work with experimenters such as bassist Barry Guy, based the 14 ruminations which make up this program on 20th century Spanish so-called classical music. The originality results because Fernández doesn’t play any of that music but instead offers interpretations birthed from careful, repeated listening to many of those compositions. Fernández’s magisterial elucidations include such chamber music staples as subtle dynamic shifts and exposing waterfalls of carefully positioned notes, but he isn’t limited to flourishes. A kinetic piece such as Catedral for instance may have metronomic theme elaboration, but his touch is such that soundboard echoes continue to ring long after syncopated octaves flash and flow. More moderated tunes such as Tonada which melodically echo both Hatikvah and Sometimes I Feel Like a Motherless Child use both strains to never slip into bathos while sustaining a delicate interface. Balanced precisely, L’esmoldor not only proffers a baroque-like series of gentle key strokes, but contrasts them with kalimba-like string strokes. Also for every bouncing theme exposition or instance of breezy swing, Fernández brings a tougher stance to other tracks — or as contrast on the same ones. For instance his measured, mandolin-like strums on unwound treble strings during Pluja Sorda are coupled with repeated key slaps, with the narrative becoming more staccato as sympathetic rattles and rumbles move past the strings and soundboard and begin reflecting the timbres from key-frame wood. 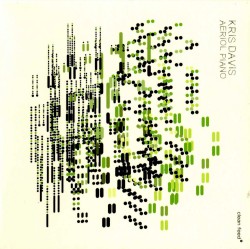 Another sophisticated piano explorer is Calgary-born Kris Davis, whose musical studies in Toronto led to a New York career working with the likes of saxophonist Tony Malaby. On Aeriol Piano (Clean Feed CF 233 CD www.cleanfeed-records.com) she delves into the instrument which can simultaneously express the qualities of a harp and percussion. She can do so at near-warp speed as she demonstrates on Good Citizen where high-frequency glissandi skip and slither across the keyboard until dynamic tremolos give way to hesitant plinks that could be recasting Chopsticks. She also plays at moderate tempos as on A Different Kind of Sleep, where tones unroll with taffy pull-like slowness as lower-pitched harmonies sympathetically ring. Mallet-teased strings dominate the exposition of Saturn Returns, working up to a broken-octave confrontation among internal string pops, wooden exterior slaps and stopped keyboard pulses. Her technique isn’t all reductionist though as she demonstrates on the first track which backs away from repeated flourishes and affiliated note exaggerations to reveal a balladic recasting of All the Things You Are. 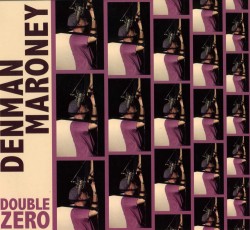 Fernández’s and Davis’ under-the-hood, speaking-length explorations are taken to a logical extreme on Double Zero (Porter Records PRCD-4063 www.porterrecords.com). Inspired equally by the music of Conlon Nancarrow, Ornette Coleman, Henry Cowell and Thelonious Monk, New York state resident Denman Maroney uses temporal harmony on what he calls a “hyperpiano” to produce a keyboard program in several tempos at once. The instrument’s strings are plucked, slapped and bowed after being prepared with copper bars, steel cylinders, Tibetan prayer bowls and rubber blocks. From the first literal discord heard on this nine-part suite, the crackling friction exposed insinuates harpsichord and Celtic harp quivers, as well as kalimba and guzheng reverberations plus suggestions of a metal saw. Still his subtle keyboard phrasing on tracks such as Double Zero Part II confirms that it’s a piano which is the major sound source. This program reaches its climax on Double Zero Part VI where Maroney`s arpeggio-rich continuum that’s almost impressionistic in its exposition unfolds alongside low-pitched, tremolo blows on the prepared strings abrasive enough to sound partials and extensions as well as root tones, involving the back frame, bottom board and capotes bar as much as the speaking length. Finally a series of sweeping glissandi are backed by cymbal-like reverberations for the finale. Elsewhere his staccato touch implies a duet between a portable keyboard and an all-metal double bass, although there are still enough cascades and pitch-sliding polytones audible that the pianistic balance is never subsumed by friction-laden clips or excited string patterns. 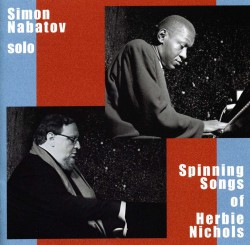 A disparate but even more demanding approach to solo playing is displayed brilliantly on Spinning Songs of Herbie Nichols (Leo Records CD LR 632 www.leorecords.com). Unaccompanied and only using the instrument’s accepted range and properties, Simon Nabatov creates original takes on eight compositions by under-appreciated American pianist/composer Herbie Nichols (1919-1963). Although the scholarly, sporadically-recorded Nichols was Bronx born of Trinidadian parents and never lived anywhere but New York, Nabatov’s position as an outsider allows him to bring more than technical skills to a rethink of Nichols’ tunes. Russian-born and educated, Nabatov lived in New York for a decade and now resides in Köln. Closer to the European tradition than the composer, who admired Prokofiev, Nabatov’s approach often slows down the originals, introducing his own harmonic language to the late composer’s running chords and subtle swing. Hear this on a stately elaboration of The Third World. Persuasively elaborating Nichols’ polyphony with hard syncopation and popping stops, the pianist’s take is both chromatic and creative. Similarly his jocular version of Terpsichore contains enough showy glissandi to advance the juddering melody in different tempos, while the sprinkling of staccato pumps overlaid with harsh passing chords creates a recurring syncopation that builds excitement like the repeated coda on Count Basie’s April in Paris. The most profound example of the ingenuity implicit in Nichols’ writing and Nabatov’s playing occurs with Blue Chopsticks. Pushing the composer’s kinetic variant of the amateur pianist’s hoary chestnut even further out, Nabatov never loses the groove. Yet with staccato extrusions and discursive glissandi he’s able to simultaneously reflect the original line, Nichols’ rearrangement and his own variation on the theme.

Judging by these CDs, and how different each sounds, there appears to be as many original methods to treat solo piano playing as there are piano keys and strings.