Praised and reviled in equal measure during his 40-year career, Vermont-based trumpeter Bill Dixon was finally recognized as one of improvised music’s most original stylists and theorists before his death at 84 in June 2010. Fittingly his final concert took place a mere three weeks previously at Quebec’s Festival International de Musique Actuelle de Victoriaville, where a hand-picked octet played this composition under his direction. Luckily the performance has been released as Envoi (Victo Records Victo cd 120 www.victo.qc.ca). Not only do the two sections illuminate Dixon’s particular mixture of formalism and freedom, but with a horn section of four playing cornet, bugle and flugelhorn, Envoi also demonstrates Dixon’s influence on a younger generation of brass players. Famously prickly and opinionated, Dixon organized The Jazz Composers Guild, one of the first musicians’ self-help organizations in the mid-1960s. A long-time professor at Bennington College in Vermont, Dixon recorded sparingly over the years, which makes this session doubly valuable. Impressionistic and dramatic, Envoi is organized with classical precision in varied sequences. Most involve muted, shaded bent notes from the brass players in counterpoint to the spiccato string swipes of cellist Glynis Loman and bassist Ken Filiano, or, in the first section, tart slurs from Michel Côté’s bass clarinet. Additional unifying motifs come from Warren Smith’s resounding kettle drumming, and, in the second section, his ringing vibes, which soften the interface as it moves forward. In that same section the unison strings maintain a menacing undertow, breached only occasionally by heraldic brassiness or dissonant grace notes, plus at one point echoing stillness from Graham Hayes’ bugle. True to Dixon’s style, most of the brass tones are segmented sound shards which waft pure air through the horns. Following nearly 40 minutes of quivery tremolo theme variations, a spectacular example of the trumpeter’s measured art arrives near the end. After one cornetist sounds heraldic tones at a higher pitch among the others’ capillary whispers, all harmonize for a protracted section of legato impressionism, only scattering at the end as one puffs quietly while another exposes plunger tones. Finally, call-and-response vamping from all marks the climax.

New York’s Taylor Ho Bynum and Chicago’s Rob Mazurek, both featured on “Envoi”, have been marked by Dixon’s compositional and improvisational skill, as has Montreal’s Ellwood Epps. On his own, Bynum is probably closest to Dixon when it comes to voicing. Atmospheric textures on the six instant compositions that make up Next (Porter Records PRCD-4058 www.porterrecords.com) are built up from his cornet, flugelhorn or trumpet, Sara Schoenbeck’s bassoon and Joe Morris’ guitar. With no instrument in the so-called front-line, and each player capable of extended techniques, it’s often difficult to separate timbres. Schoenbeck may use her burbling pedal-point as a foundation, but on a tune like Next, she splinters her tone into tiny reed bites, and later harmonizes intense growls with Bynum’s triplet patterns. On Next the guitar texture is all bottleneck licks. Yet on pieces such as Consensus Struggle Morris’ percussive strumming emphasizes the beat, allowing the bassoonist to solo with hoarse multiphonics, and giving the cornetist room for peeping squeals and trippy tongue flutters. The trio’s interface is most appealing on Fireside. Morris’ below-the-bridge plinks are further coloured by Schoenbeck’s burbling bluster as Bynum’s staccato, off-centre trills soar upward to lip-twisting brassiness. 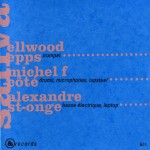 Someone who took lessons with Dixon and – at least in choice of band name – has inherited the older man’s impudence, is Ellwood Epps, whose Pink Saliva trio (& Records &11 www.etrecords.net), is filled out by Alexandre St-Onge on electric bass and laptop and Michel F Côté on drums, microphones and lap steel guitar. Although Dixon only dabbled in electronics, Epps, a Toronto native, and his Québécois confreres embrace it wholeheartedly, adding oscillated wave forms and crackling drones to everything they play. Negotiating the line between indie-rock and jazz-improvisation, the CD is studded with irregular ruffs and drags on Côté’s part, rumbles and pops from St-Onge’s string set and dial-twisting buzzes. At points overdubbed, Epps’ trumpet soars over these wiggling sequences, repeatedly shifting from low-pitched inner-horn gurgles to piercing trills, adding additional touches of soaring lyricism.

Regularly operating outside of jazz’s mainstream, Bill Dixon’s brass sound and ideas actually influenced more musicians than is generally acknowledged. It’s both ironic and appropriate then, that it was an experimental Canadian festival which gave him a platform for his final performance.