My first exposure to local mandolin maestro Andrew Collins was through my activities here at The WholeNote – discs by his groups the Foggy Hogtown Boys and Creaking Tree String Quartet. But it was through New Music Concerts that I first had the pleasure of meeting him in 2008. We had been asked to mount a performance of Chris Paul Harman’s Postludio a rovescio for the presentation of the Jules Léger Prize for New Chamber Music, and the piece called for mixed ensemble, including both guitar and mandolin. Although we already had an excellent guitarist lined up for the concert, it proved to be quite a challenge to find a mandolin player well-versed in the contemporary techniques and notational complexities of Harman’s score. On a recommendation from trumpeter Stuart Laughton, who had taken mandolin lessons from him, we approached Collins. A very accomplished musician in his own field – bluegrass and any number of roots-based musics – the world of hardcore contemporary composition was definitely outside his comfort zone. But what a trooper! Throughout the rehearsal process, he worked tirelessly and rose admirably to the challenge, to everyone’s satisfaction including his own.

I don’t know if that experience sparked an interest in composition per se, but on his latest project, The Andrew Collins Trio – And It Was Good (andrewcollinstrio.com), we are presented with an eight-part suite by Collins depicting a secular version of the Biblical creation story. The work is scored for the multi-instrumentalists of the trio itself – Collins on mandolin, mandola, mandocello and fiddle, Mike Mezzatesta, mandolin, guitar and fiddle, and James McEleney, double bass and mandocello – plus a traditional string quartet formation provided by the Phantasmagoria String Quartet (John Showman, Trent Freeman, Ben Plotnick and Eric Wright). The suite opens ethereally with Light from the Darkness, gradually moving from plucked harmonics to busy mandolin passages over static colours in the quartet, and then on to a gently lilting melody over shifting, cloudlike accompaniment. Firmaments features high mandolin lines soaring above ostinati from the bass and guitar. The quartet returns in Seed of Its Own Kind accompanying an arpeggiated contrapuntal melody from two mandolins. The suite proceeds through Stars, Sun and Moon, Fish and Fowl (featuring a fiddle duet with quartet accompaniment) and Everything That Creeps (with a pizzicato double stop opening from the bass) before coming to Rest, described as an “open, slow, ballad.” The seven-day creation story does not end there however and, with the eighth track, And It Was Good, culminates in an upbeat, bluegrass celebration with a good time had by all, especially me.

This just in: The Andrew Collins Trio is one of five ensembles nominated in the Instrumental Group of the Year category at the Canadian Folk Music Awards for And It Was Good.

Concert note: The Andrew Collins Trio launches And It Was Good at Hugh’s Room on Friday October 21. I know where I will be that night! 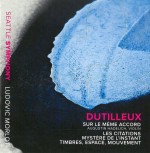 With Dutilleux – Sur le même accord; Les citations; Mystère de l’instant; Timbres, espace, mouvement (SSM1012 seattlesymphony.org), Ludovic Morlot and the Seattle Symphony complete the third volume in a survey of orchestral works in a centennial tribute to Henri Dutilleux (1916-2013). Sur le même accord – on the same chord – was written at the request of Anne-Sophie Mutter and first performed in 2002. Described as a nocturne for violin and orchestra, it is in one movement and begins with a statement of the six-note phrase that dominates the work played pizzicato by the soloist accompanied by dark timpani strokes. Although the colour remains dark throughout its ten-minute duration, there are moments of busy excitement with shrill violin glissandi. The young Italian violinist Augustin Hadelich, who has made his home in New York City for the past dozen years, shines as the soloist.

Dutilleux was not a prolific composer, working slowly and meticulously, with less than a dozen orchestral works, four chamber pieces and a smattering of piano works and songs in his oeuvre. Les citations for oboe, harpsichord, contrabass and percussion had a long gestation. Originally a one-movement work that did not include the bass, it was composed for the Aldeburgh Festival in 1985 and uses an extended quotation – citation – from festival founder Benjamin Britten’s Peter Grimes. Dutilleux added a second movement in 1991 at which point the bass was incorporated – reminding us of an early music continuo – as were quotes from French composers Janequin (1485-1558) and Jehan Alain (1911-1940), two Renaissance composers. Whereas the first movement begins with an extended mournful oboe melody, the second opens with a virtuosic harpsichord solo. Dutilleux returned to the work two decades later to make a final version just three years before his death in 2013.

Swiss conductor Paul Sacher commissioned some of the most significant works of the 20th century including pieces by Stravinsky, Martinů, Elliott Carter and significantly Bartók’s Music for Strings, Percussion and Celesta. One of the last works that Sacher commissioned was Dutilleux’s Mystère de l’instant, which in tribute to Bartók is scored for strings, percussion and the Hungarian cimbalom. The one-movement work is in ten connected sections, the penultimate of which is Metamorphosis (sur le nom SACHER) thus providing a double tribute.

The disc ends with the earliest composition on offer, Timbres, espace, mouvement (ou “La nuit étoilée”) from 1977, inspired by van Gogh’s painting The Starry Night. Drawing on the full orchestral palette in the first and third movements – Nébuleuse and Constellations – the intervening Interlude begins in the growly depths of the contrabass section and only gradually ascends into the firmament.

Concert note: “Henri Dutilleux – A Portrait from the Piano” presents another side of this iconic French composer performed by Katherine Dowling at Gallery 345 on October 28. 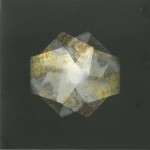 The weathered stone (ER26 ergodos.ie) is a mostly meditative suite by Irish composer Benedict Schlepper-Connolly. Its gentle, pointillist minimalism is something like the music of Morton Feldman or perhaps Linda Catlin Smith, but in double time. The overall sensibility and careful placement of notes is familiar but in this case there is a repetitive trance-like effect that gives the impression of very slow development while the notes are actually moving quite quickly. The press release describes it aptly as a “many-hued musical statement that is at once minimal and teeming with matter.” It is said to be “inspired by the secret histories of landscapes, old maps and memory” and it is certainly filled with a haunting beauty. The eponymous extended first movement is scored for piano, violin and cello, although quite a bit of time passes before we become aware of the cello in the texture, which is dominated by slow-yet-ebullient piano and sparse violin repeating a two-note theme. As it develops over its 20-minute duration, roles are reversed with the rolling strings punctuated by gentle but persistent piano interpolations which in turn are replaced by placid clouds of sound from all three. There is eventually a percussive pizzicato section, but this soon passes back into a calm arpeggiated progression cleverly passed between the three musicians.

The second movement, A View from Above, features the Robinson Panoramic Quartet – one each of violin, viola, cello and bass – and opens with an extended pizzicato introduction which eventually gives way to a rollicking, wave-like arco barcarolle. This is gradually replaced by sparse solo melodies replete with harmonics in the high strings which continue to the piece’s end. Beekeepers is a gentle – that word keeps coming up throughout this journey – song featuring the soft and vulnerable voice of the composer. The instrumentation includes Saskia Lankhoorn’s piano, chalumeau – a rarely heard precursor of the clarinet played by Seán Mac Erlaine – and the quartet, which in this instance creates a texture reminiscent of a harmonium drone.

Schlepper-Connolly is (barely) heard on synthesizer in the last track, Field, on which piano and quartet return while Mac Erlaine switches to bass clarinet. While this closer does build to mezzo-forte with a brief dance interlude, the overall feel of the track, and the suite, is gentle (again!) beauty spun gracefully over its 45-minute development. A wonderful experience for anyone in a quiet mood.

Another disc perfect for a quiet mood is Teresa Suen’s debut CD Longing (teresasuen.com). Suen has the distinction of being the first Chinese harpist to obtain a Doctor of Music degree, which she acquired after studies at Northwestern University in Evanston, Illinois with Elizabeth Cifani. The Hong Kong-born harpist has recently made Toronto her home after a three-year appointment at Carleton University in Ottawa. Longing was recorded in 2010 and features turn-of-the- and mid-20th-century works for solo harp. While the music is more or less modern – including works by Paul Hindemith and John Cage – it is surprising how mellow the overall feel of the disc is. It begins and ends with Préludes intimes by the important pioneer of harp technique and development, Carlos Salzedo. The subtitles tenderly emoted and profoundly peaceful are apt descriptions, but his Chanson dans la nuit includes a variety of moods.

Hindemith, in his quest to write “music for use,” composed solo sonatas for every instrument. The Sonata for Harp was written in 1939 in Switzerland just before he emigrated to America. The three-movement work is inherently melodic with moments of playfulness and exuberance, although its finale is moody and slow. Cage’s In a Landscape is the most recent work on the disc, dating from 1948. Originally a piano piece, it is often played by harpists, its slow and mournful arpeggios being well-suited to the instrument. Other works included are by Saint-Saëns, Pierné and Granados. Suen has chosen a well-balanced program focusing on calmness and warmth, beautifully played. She will be a welcome addition to the local music scene.

Concert note: Toronto’s reigning harp diva Judy Loman is celebrated on October 30 in “Mazzoleni Masters: Judy Loman 80th Birthday Celebration,” where she will perform works by Salzedo among others, at Mazzoleni Hall. The concert celebrates her illustrious career and the launch of Ariadne’s Legacy, the complete works for harp by R. Murray Schafer which is being released on the Centrediscs label and will soon be reviewed in these pages.

Guitarist Eric St-Laurent and his quartet will launch Planet (ericst-laurent.com) at Hugh’s Room on October 6. This jazz/funk offering features Jordan O’Connor on bass, Attila Fias on piano and the Latin-nuanced percussion of Michel DeQuevedo in a set of five St-Laurent originals and intriguing arrangements of Charlie Parker’s Donna Lee, Carly Rae Jepson’s Call Me Maybe and in a moment of relaxation, the second movement theme from Beethoven’s Piano Sonata No.8 convincingly rendered on acoustic guitar with double bass in unison. The driving rhythms and clever interactions of the quartet were just the wake-up call I needed after my extended immersion in the discs mentioned above.

After a busy summer in Toronto, trumpeter and flugelhornist Andrew McAnsh has returned to his studies at the Berklee School in Boston. Although there are no local performances on the immediate horizon, McAnsh has left us with Illustrations (andrewmcansh.bandcamp.com) on which he is joined by Jeff Larochelle (tenor sax), PJ Andersson (trombone), Geoff Young (guitar), Wes Allen and Soren Nissen (bass), Chris Pruden (piano) and Ian Wright (drums). Wordless vocals by Mjaa Danielson and Mara Nesrallah (who also provides compelling narration on Confabulation) in unison with horn lines add to a very intriguing big band texture. All the tracks were composed by McAnsh with the exception of the opening Utopia Suite which was co-written with the trombonist. Of particular note are McAnsh’s arrangements which convey the impression of a large brass section using only three horns. Perhaps we’ll have a chance to hear him live again next summer.

We welcome your feedback and invite submissions. CDs and comments should be sent to: DISCoveries, WholeNote Media Inc., The Centre for Social Innovation, 503 – 720 Bathurst St. Toronto ON M5S 2R4. We also encourage you to visit our website
thewholenote.com where you can find added features including direct links to performers, composers and record labels, “buy buttons” for online shopping and additional, expanded and archival reviews.