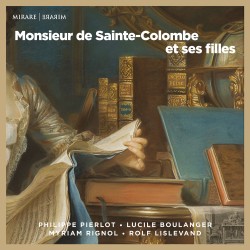 Other than being slightly aware that there had been a brief renaissance of the music of Monsieur de Sainte-Colombe (Jean de Sainte- Colombe 1640-1700) during the 1990s, I knew little about the French composer and celebrated violist, prior to picking up this fine recording. I am glad that I did, however. Recorded beautifully in the Chapel of the Immaculate Conception in Nantes, the church’s gorgeous acoustics become a welcome fifth member of the consort of Philippe Pierlot, Lucile Boulanger and Myriam Rignol, all on viola de gamba, along with theorbist Rolf Lislevand, to faithfully recreate and capture the nuance and intimacy of this still-popular musical form.

Listening to the 17th-century music of Sainte-Colombe, along with complementary pieces by Louis Couperin, Jacques Champion de Chambonnières and Robert de Visée during Lockdown 2020 can, I suppose, feel somewhat anachronistic, if not downright discordant from the realities that we are all dealing with on a daily basis. But if it is possible for you to do so, the opportunity to disconnect and to immerse yourself in the listening pleasure of this straight-forward, well-played and conversational music is there for you here. Perhaps most meaningfully, the realities of COVID-19 have forced many of us to potentially re-evaluate friendships, reconnect (or make amends), realizing that life is valuable and, sadly, short. Always, perhaps, but seeming to be particularly so during this time of widespread illness and loss. Accordingly, Sainte-Colombe’s Tombeau Les Regrets, performed beautifully here, offers an opportunity for listeners to contemplate and “meditate upon death,” allowing the Stoic edict Memento Mori (“remember that you will die”), to be not a morbid reality check, but rather to remind us all to love, live and listen, fully and completely. A valuable lesson to be sure, and one, perhaps, that the beauty of early music can teach us today. 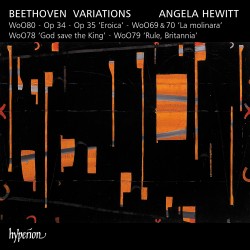 2020 has certainly been a year like no other. And while social media informs me that many of us, while hibernating in lockdown, have turned to amateur immunology, sourdough baking and mask creation as a way of passing the time, the Canadian-born, beloved and highly fêted pianist, Angela Hewitt, turned her keen musical gaze during lockdown towards Beethoven’s colossal “Hammerklavier” Sonata, Op. 106, which she learned, thus completing her cycle of the composer’s 32 sonatas. Hewitt, renowned for her interpretations of the major keyboard music of Johann Sebastian Bach, for which she was, earlier this year, awarded the City of Leipzig Bach Medal – the first time in its history the award was bestowed upon a woman – continues her focus on LvB here, on this great new Hyperion recording, Beethoven Variations.

Approaching the repertoire with the creative insight, scholarly rigour and wholly unique interpretative lens for which she is known, Hewitt once again reveals her singular ability to not only bridge, but illuminate Beethoven’s challenging musical passages (which she seems to traverse with effortless virtuosic ease) with the baked-in humour and sense of fun that perhaps few see, but which Hewitt neatly brings to the fore. As she writes about the album’s penultimate track, “God save the King” in her own terrifically penned liner notes that offer invaluable informative pedagogical insight into her artistic and pianistic process, “if ever you needed proof of humour in his music, here it is,” before launching into its deft contrapuntal workout. 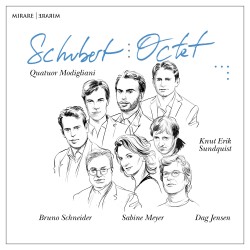 When Schubert took on a commission request in 1824 to compose a piece similar to Beethoven’s Septet, he was in a vulnerable place in his life – his physical health was poor, he was experiencing bouts of depression and his music was not getting the recognition he was hoping for. Yet he wrote the largest-scale chamber music work of his opus and it did not reflect the intensity of his life at the time. The Octet is pure Schubert magic – full of abundant solo lines for each of the eight instruments, beautiful, elegant and uplifting. Although this piece has a similar instrumentation and basic structure to Beethoven’s Septet, perhaps Schubert’s biggest nod to Beethoven comes through the achievement of great creativity and layers of expression in the midst of suffering.

The Modigliani Quartet and their respective colleagues, Sabine Meyer (clarinet), Bruno Schneider (horn), Dag Jensen (bassoon) and Knut Erik Sundquist (double bass), take on this magical piece with an understated gusto. Almost an hour long and consisting of six movements, Schubert’s Octet requires unrelenting drive and imagination, both of which came through in the fabulous artistry of the ensemble. Their performance has a wonderful combination of intensity and lightness that kept me both relaxed and at the edge of my seat. This ensemble has enjoyable synergy that is most obvious in a unity and refinement of their interpretative ideas and sound. 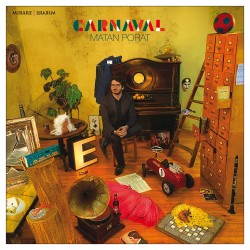 These are challenging times and what better way to help lift the pervading dark mood than a musical carnival – specifically Schumann’s Carnaval Op.9? The piece, completed in 1835, remains among the most beloved from the Romantic repertoire and, seemingly, would never warrant any degree of modification. Yet the Israeli-born pianist Matan Porat had other ideas, and the result is this splendid recording on the Mirare label, his third disc to date.

Porat acknowledged that while Carnaval is a quintessential document of Romanticism, he wanted to take a closer look at Schumann’s musical mind and expand upon the original score through the insertion of 23 additional short pieces by 18 composers as diverse as Heitor Villa-Lobos, François Couperin and György Kurtág. In so doing, Porat hoped it would not only shed light on music by other composers, but also inspire a greater appreciation for the original score.

And it works! Delivering a polished and elegant performance, Porat has clearly taken considerable care with the placement of the musical selections.  As an example, Schumann’s Pierrot is followed by Villa-Lobos’ A manha da Pierrette, written in the same coquettish mood. On the other hand, Kurtág’s Ostinato in A-flat, with its repeated bass notes, forms a fine introduction to Schumann’s Reconnaissance in the same key, which is followed by the  Prelude in C Minor from Bach’s first book of the Well-Tempered Clavier, and in turn, Pantolon and Columbine, all demonstrating the same frenetic energy.

Finally, after 43 tracks, what could be a better ending than the rousing Davidsbündler March, bringing the set to a most satisfying conclusion? Kudos to Porat, not only for an exemplary performance, but for his skillful reconfiguration of a much-loved piece – recommended. 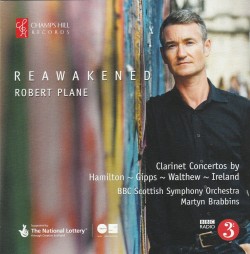 Ruth Gipps (1921-1999) composed her Clarinet Concerto in G Minor, Op.9 in 1940, the year she began studying with Ralph Vaughan Williams. His influence pervades throughout: in the first movement, the clarinet seemingly extemporizes over an outdoorsy walking bass; the bucolic mood is sustained in the pastoral slow movement and the folk-dancy finale. It’s another attractive audience-pleaser.

What should have been recognized by now as a major contribution to the clarinet repertoire is the CD’s longest, most colourfully scored, most modern-sounding work – the 28-minute Concerto for Clarinet and Orchestra, Op.7 (1950) by Iain Hamilton (1922-2000). Propulsive, irregular, even jazzy rhythms contrast with long-lined, darkly melancholic lyricism, all calling for extreme virtuosity from the soloist, amply provided by Plane.

Another first recording ends the CD – Graham Parlett’s arrangement for clarinet and string orchestra of the warmly lyrical Fantasy Sonata (1943), originally for clarinet and piano, by John Ireland (1879-1962), a minor master deserving much greater exposure in North America. 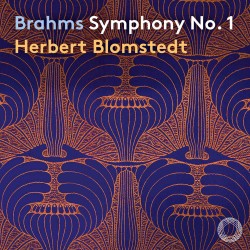 At the risk of stranding ourselves in a past we’ll never relive, we continue to revisit masterpieces from over a century ago. This provides work for my fellow performers and me, and possibly keeps the public in touch with sonic masterpieces. We might ask ourselves, what is new and different in this latest iteration? Otherwise, is there any point?

I take enormous pleasure in hearing the fine Gewandhaus Orchestra, under Herbert Blomstedt, recraft Brahms’ titanic First Symphony in C Minor Op.68 into audible form. The performance has so much clarity and poise, nothing I write in response can mean much at all.

I’m no collector of things, nor of recordings, but I am a repository of memories, and this piece remains on a prominent shelf in the room where professional reminiscence is housed. As a student, the experience of hearing the wonderful energy and intelligence of Brahms’ First fuelled my desire to be among the lucky few who might perform it in a professional setting. Knowing how long he took to knuckle down and live up to his billing as the next great symphonist after Beethoven inspires me to carry on at my advanced age.

It is a fantastic rendition, as good as any out there I’m sure, and worth owning whether it is one among many, or your first (even only) version. The playing is pure, both delicate and yet powerful. Blomstedt asks for and receives fine and subtle performances from the entire band.

The Andante sostenuto second movement is languid and deliciously melancholy. Add in the uplifting finale, with its wunderhorn call and its hymn answering Beethoven’s Ode to Joy, and perhaps the troubles of today might be more bearable. 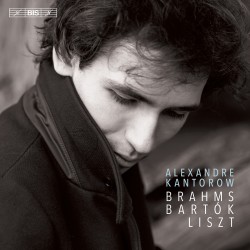 Young French pianist Alexandre Kantorow has already had a distinguished recording career with three award-winning releases. This recital is his first since winning the Tchaikovsky Competition in 2019 and it too is a real winner. As a thought-provoking musician he now focuses on the Rhapsody, a thoroughly Romantic genre, invented by Liszt followed by Brahms, Rachmaninoff, Ravel, Sibelius etc. and into the modern era with Bartók and even Gershwin.

Kantorow is not looking for popular show pieces, although his program offers plenty of hair raising virtuosity. He starts off with a very effective rendition of the tempestuous Brahms Rhapsody No.1 demonstrating a virtuoso Romantic abandon, full of fire, but also a gentle lyricism in the middle part. Kantorow is a truly mature artist who belies his age as evidenced in the most ambitious work on the program, Brahms’ Piano Sonata No.2. This was the youthful composer’s first major piano work and it is full of rich musical ideas, opulent harmonies, yet under strict compositional rigour. It starts off with virtuoso double fortissimo octaves as its opening salvo. I love the Trio part of the Scherzo, Poco piu moderato – a wonderful melody that enchants the ear.

The second half is devoted to Hungarians. Young Bartók’s Rhapsody Op.1, which harks back to the Romantic era, and in tribute to Liszt, seems to revel in beautiful harmonies and evokes Gypsy music. Very much unlike the later avant-garde Bartók. The fiery second part is a wild Hungarian dance of amazing bravura.

The disc ends spectacularly with Liszt’s Hungarian Rhapsody No.11 played with such amazing gusto that it will lift you up from your seat. A gorgeous recording.