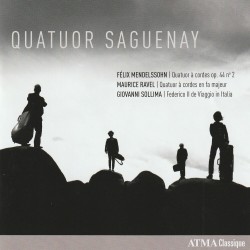 Quatuor Saguenay (formerly Quatuor Alcan) celebrates its 33rd anniversary this year, and while three of the members have been together for almost 30 years, the new CD Mendelssohn – Ravel – Sollima is the first recording with first violinist Marie Bégin (ATMA ACD2 2846 atmaclassique.com/en).

The ensemble says that Bégin brings freshness and a colour to the project that particularly suits the two major works on the CD, Mendelssohn’s String Quartet in E Minor, Op.44 No.2 and the Ravel String Quartet in F Major. Certainly the former is bursting with life and the latter full of shimmering warmth in lovely performances. 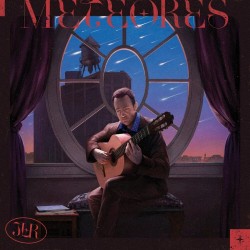 The Montreal classical guitarist Jasmin Lacasse Roy recorded, mixed and produced his self-issued CD Météores (fanlink.to/meteores), an album he describes as “an eclectic homage to a neighbourhood that deeply inspires me with its laid-back atmosphere imbued with artistic energy – Montreal’s Mile End district.” The title comes from his desire to have each piece “shine like a meteor.”

The ten short pieces are not literal depictions of scenes or events, but impressions (Roy wanted an album that “sounds like an impressionist painting”), and they’re terrific, displaying great imagination, technical skill and virtuosity. The whimsical titles include Cast iron rhapsody, Impétuositeration, The nostalgic chronicles of count Rachmanula, Mile End Winter and Midnight disco lounge.

Roy can write great melodies and hooks as well as challenging tours de force, all of it beautifully recorded in a delightful CD. 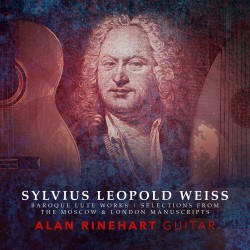 Rinehart feels that Weiss’ lute music was overshadowed by keyboard music, especially that of his direct contemporary J.S. Bach, and consequently under appreciated, and the recital here certainly supports that view. The three major works, all with five to seven dance movements, are the Partita in A Minor, the Partita in G Major and the Suite in D Major. An Allegro in E Minor, a Fantasia, the Tombeau sur la mort de M’Comte de Logy, a Gallanterie and a Minuet & Trio complete the disc. 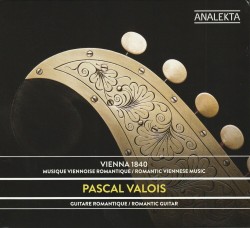 Montreal guitarist Pascal Valois continues his exploration of the guitar during the Romantic era with his new CD Vienna 1840 – Romantic Viennese Music (Analekta AN 2 9197 analekta.com/en).

Valois employs period-appropriate ornamentation, stylistic practices and improvisation in his playing, and for this recording aimed to rediscover the expressive mannerisms widely used in the German Romantic period.

Two of the Six Preludes Op.46 from 1840 by Emilia Giuliani-Guglielmi – the daughter of Mauro Giuliani – open the disc. The Hungarian guitar virtuoso Johann Kaspar Mertz is represented by five selections from his Barden-Klänge Op.13, his Hungarian Fantasy No.1 Op.65 and his arrangement of Schubert’s song Ständchen. Giulio Regondi’s Nocturne “Rêverie” Op.19, with its demanding tremolo work completes the CD. 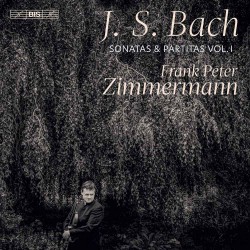 Violinist Frank Peter Zimmermann has been recording for four decades, but has never included the Bach solo works. With “great respect for the task at hand” his new CD J.S. Bach Sonatas & Partitas Vol.1 begins to rectify that, and boy, was it ever worth the wait (BIS-2577 bis.se).

The three works here are the Sonata No.2 in A Minor BWV1003, the Partita No.2 in D Minor BWV1004 and the Partita No.3 in E Major BWV1006, and the performances are simply outstanding. Zimmermann is faultless technically, with never a hint of anything less than supreme control and artistry. There’s great clarity of line through the multiple-stopping, added ornamentation in the slow movement repeats and an intelligent approach to tempos.

A spacious, resonant recording ambience adds to a superb release. 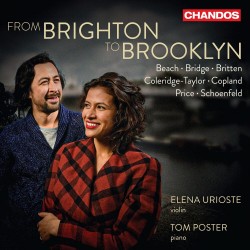 Paul Schoenfeld’s terrific Four Souvenirs opens the disc with a bang. Three lovely short pieces – Cradle Song, Romanze and Heart’s Ease – by Frank Bridge, who was born in Brighton and conducted in New York – are here, as are the Three Pieces from Suite Op.6 by his student Benjamin Britten, who was president of the Brighton Philharmonic Orchestra.

Once again, this superb duo enchants the listener from start to finish of another gorgeous CD. 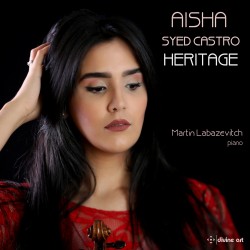 Recorded in England in April 2019, it’s an album of works with primarily American and Latino roots, including Una Primavera para el Mundo by the Dominican composer Rafael Solano in his own arrangement made specifically for this recording. There are three numbers from Bernstein’s West Side Story, tangos by Piazzolla (Oblivion), Carlos Gardel (Por Una Cabeza) and Albéniz (España Op.165 No.2), the latter arranged by Kreisler, who also arranged the Granados Spanish Dance No.5 and the Danse Orientale from Rimsky-Korsakov’s Scheherezade.

The signing of Castro and the launch of this CD were announced with great fanfare, and it’s easy to hear just why Divine Arts is so excited. She’s clearly a talent to watch.

There are two sets of complete works this month: 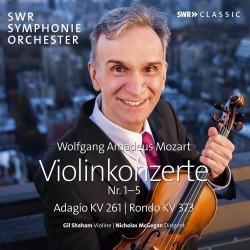 Violinist Gil Shaham is joined by reduced forces of the SWR Symphonieorchester under Nicholas McGegan on the 2CD set of Mozart Violonkonzerte Nr.1-5, along with the Adagio In E Major K261 and the Rondo in C Major K373 (SWR Classic SWR19113 naxosdirect.com/search/swr19113cd).

The concertos were written when Mozart was a full-time violinist at the Salzburg court, the final four in an astonishing six-month period in late 1775.

Shaham, who always has a radiant clarity to his playing, accurately described here as “flawless technique combined with his inimitable warmth and generosity of spirit,” is in superb form. McGegan is an expert in 18th-century style, and together they make wonderful music on a simply outstanding and beautifully recorded set. 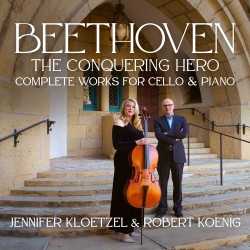 Jennifer Kloetzel is the cellist and Robert Koenig the pianist on the 3CD set of Beethoven: The Conquering Hero, Complete Works for Cello and Piano (Avie AV2450 avie-records.com/releases).

The five cello sonatas are here, together with the three sets of variations and the Sonata in F Major for Piano with Horn or Cello, Op.17. The piano is a 19th-century Blüthner 9-foot grand and the cello a 1901 Camillo Mandelli. There’s a lovely balance in the recording, a clear piano sound that never overwhelms and a warm, rich cello tone.

Kloetzel has been playing the cello sonatas since she was eight years old, so it’s no surprise that we’re in very good hands here. Koenig is an outstanding partner. 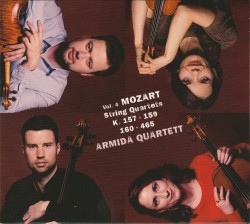 The three-movement String Quartets No.4 in C Major K157, No.6 in B-flat Major K519 and No.7 in E-flat Major K160, written in 1773 during a journey to Italy are paired with the String Quartet No.19 in C Major K465 “Dissonance” from 1785, a work foreshadowed by the traces of dissonance in the three earlier quartets by the 17-year-old Mozart.

The Armida Quartett has been collaborating with G. Henle Verlag on their Urtext edition of Mozart’s string quartets, and their study of the manuscript and early edition sources has resulted in stylistically authoritative interpretations and finely detailed performances.

The final volume in the series is scheduled for release in April. 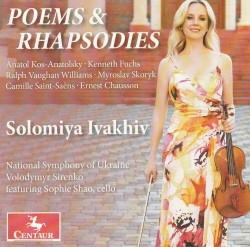 The American-based Ukrainian violinist Solomiya Ivakhiv is the soloist on Poems & Rhapsodies, with the National Symphony Orchestra of Ukraine under Volodymyr Sirenko (Centaur CRC3799 amazon.com/Poems-Rhapsodies-Solomiya-Ivakhiv/dp/B09NSYKL93).

They are joined by cellist Sophie Shao in the little-heard but quite charming Saint-Saëns work La Muse et le poète Op.132 (the publisher’s title, not the composer’s) which began life as a piano trio.

Ivakhiv displays a clear, bright tone and technical assurance in competent readings of Chausson’s Poème Op.25 and Vaughan Williams’ The Lark Ascending, but really excels in the remaining three works on the disc. The simply lovely American Rhapsody (Romance for Violin and Orchestra) from 2008 by the American composer Kenneth Fuchs is heard between two works by Ukrainian composers: the 1962 Poem in D Minor for Violin and Orchestra by Anatol Kos-Anatolsky (1909-83); and the Carpathian Rhapsody from 2004 by Myroslav Skoryk (1938-2020). 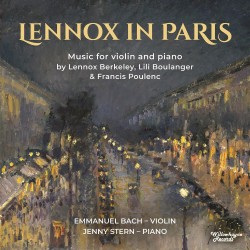 Berkeley lived in Paris from 1926 to 1932, studying with Nadia Boulanger and Ravel and counting Poulenc among his musical friends. Only one of his works here – the Violin Sonata No.1 – was written during that time, the Sonatina dating from 1942 and the Elegy and Toccata Op.33 Nos. 2 & 3 from 1950.

Bach’s playing seems quite tentative, not being helped by an over-prominent piano balance, and one can’t help feeling that these are works deserving of far more colourful and insightful performances.

The French pieces fare much better. There’s a lovely touch in the Boulanger pieces – Nocturne, Cortège and D’un matin du printemps – a sweet tone and nice feel to the middle movement of the Poulenc Sonata, and some assured playing in the Heifetz transcriptions of Poulenc’s Mouvements perpétuels and Presto in B-flat Major.

Listen to 'Lennox in Paris' Now in the Listening Room 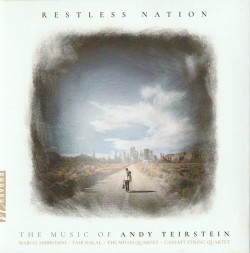 The Cassatt String Quartet performs the title work, its impressions of a year-long family expedition evoking “the fierce energy” of American fiddling.

On Secrets of the North the Mivos String Quartet is joined by Marco Ambrosini on the nyckelharpa, the traditional Swedish keyed fiddle, in a work that incorporates elements inherent in Swedish folk music.

Azazme Songs, Suite for String Quartet, Oud and Dulcimer was composed after a four-day trek with Azazme Bedouins across the Aravah desert. They are not direct transcriptions but rather impressions gleaned, the dulcimer representing the sound of the Bedouin sumsumia, a strummed psaltery-type instrument. The Mivos String Quartet performs again, with the composer playing dulcimer and Yair Dala on the oud.

Teirstein plays a brief harmonica solo to open Letter From Woody with the Janáček Philharmonic Orchestra under Jirí Petrdlík. Inspired by one of the letters that Woody Guthrie wrote to his future wife, it “draws on traditional American folk string bowings and energies.”

Listen to 'Restless Nation' Now in the Listening Room