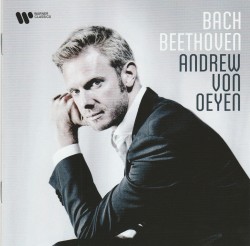 After the silence descended over concert halls in 2020, many performing artists focused on exploring the possibilities of new sonic places through repertoire, musical approaches or unusual physical spaces. Intimate solo sessions offered these artists the opportunity for introspection and extended a salute to their audiences. According to Andrew Von Oeyen’s liner notes, his desire to turn to the repertoire that expressed the essence of current times and fortified noble feelings of resilience and perseverance resulted in this album. And what an album it is! Every piece carries a deeper meaning of our collective experiences in the times of the pandemic and Von Oeyen conveys it on both the intellectual and emotional level. The performance goes beyond his dazzling technique and splendid phrasing. It is as if he simply knows where the heart of each composition lies and he is unveiling it for the listener.

Bach’s Overture in the French Style, a quest for order and clarity, is particularly well played. Not being a Bach specialist allows Von Oeyen to hear the interweaving voices in a slightly more juxtaposed – rather than contrasting – way. Beethoven’s piano sonatas (Nos.13 and 23), embodying vitality and determination, bring in the currents of energy. The choice to end the album with Kempff’s piano arrangements of the movements from Bach’s Flute Sonata No.2 and Harpsichord Concerto No.5 are surprising but welcomed. These solitary musings of one artist are well noted and well appreciated.