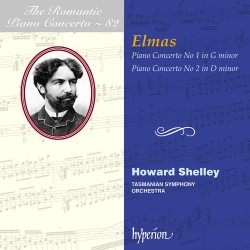 Stéphan Elmas? Who? One could be forgiven if the name seems unfamiliar, but during his lifetime, this Armenian pianist-turned-composer was a respected musician and pedagogue. Born into a well-to-do family in Smyrna (now Izmir) in 1862, he showed musical promise at an early age and later studied in Vienna, making his debut in 1885 to great acclaim. Elmas ultimately turned to composition, writing in a conservative style not dissimilar to that of Anton Rubinstein – and with more than a passing nod to Chopin.   His style is perhaps nowhere better represented than in the two piano concertos featured on this Hyperion disc with Howard Shelley performing and also directing the Tasmanian Symphony Orchestra, the latest in the Romantic Piano Concerto series.

The Concerto in G Minor from 1882 is very much a product of its time. Encompassing a large canvas – the first movement is 19 minutes alone – the work allows the soloist plenty of opportunity to display their technical prowess, juxtaposed with sections which are quietly introspective. The formidable technical demands should come as no surprise – after all, the composer was also a virtuoso pianist.  Throughout, Shelley performs with a solid conviction at all times demonstrating carefully nuanced phrasing and a flawless technique, while the TSO proves to be a solid and sensitive partner.

The second concerto, written five years later, contains the same degree of attractive interplay between piano and orchestra. Once again, Elmas’ profound gift for melody shines through brightly – particularly in the second movement Andante – and more than makes up for any shortcomings the piece may have with respect to form and thematic development.

While these concertos aren’t in the same league as those of Brahms or Rachmaninoff, they’re worthy examples worth investigating. Thanks to Shelley and the TSO, they’ll be prevented from languishing in undeserved obscurity.