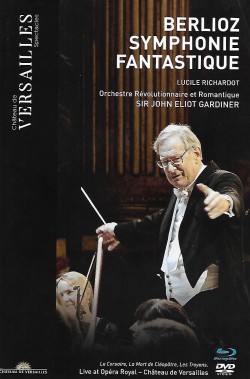 There is no shortage of recordings of Berlioz’s Symphonie fantastique but here is yet another one of special interest. A hinged package contains two video discs and trilingual booklet. Presented is a video of an all-Berlioz concert given by Sir John Eliot Gardiner directing his orchestra, the Orchestre Révolutionnaire et Romantique in the opulent Opera Royal, Chateau de Versailles on October 17, 2018. The participating guest artist is mezzo-soprano Lucile Richardot. The program begins with the Overture to Le Corsaire, followed by a longtime favourite, the heartfelt, La mort de Cléopâtre, passionately delivered by the totally involved Richardot. From Les Troyens the orchestra plays The Royal Hunt and Storm and the impressive Richardot returns with a deeply felt realization of the Monologue et air de Didon, “Ah, je vais mourir… Adieu, fière cité.” Richardot is a French mezzo-soprano who is highly respected as a soloist in Baroque music and a lot more. You can readily appreciate her voice and versatility on any of her countless videos on YouTube.

As the arguments pro and con original instruments, i.e. the instruments of the composer’s day, have all been stated and debated there is no point in carrying them on here. However, here at least, these unique, previously unheard sonorities and textures of the instruments that Berlioz knew are eloquently articulate and a revelation for listener and viewer alike. Berlioz would be elated.

Footnote: “The Secret of Beethoven’s Fifth Symphony” with Gardiner and his orchestra on YouTube is a must-watch.