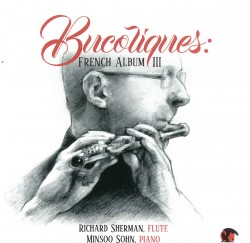 Kudos to flutist Richard Sherman and pianist Minsoo Sohn for this selection of little-known music for flute and piano by four more or less forgotten 20th-century composers. Sherman’s readings are disciplined and spirited. Sohn’s, to my ears anyway, somehow capture the French-ness of the music.

The title Bucoliques raises questions about the composers, their intentions and the world in which they lived. Neither the lives of the composers, Gabriel Grovlez (1879-1944), Raymond Gallois Montbrun (1918-1994), Louis Durey (1888-1979) and Alfred Desenclos (1912-1971), nor Paris, the city where they lived and worked, were bucolic. “Bucoliques” is borrowed from the title of the work by Desenclos. The program notes suggest that “the classical titles of its movements recall those of 19th-century academic forebears, such as Théodore Dubois, and reflect the academic rigour of his work.” I don’t quite get the connection between Arcadian allusion and academic rigour, although it may reflect a taste for irony and self-deprecating humour!

The notes also bring to light something of Desenclos’ approach to composition: “...I do not deny the past on the pretext of creating the future.” The turbulence of Durey’s career is hinted at, with the references to his involvement in left-wing politics and the French Resistance; and we are also told of Montbrun’s rise “to the top of the French musical establishment.”

Bucolic or not, their music gives us a glimpse into the ideals and accomplishments of another time, so close and yet so remote.