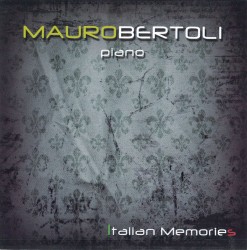 Despite Italy’s long-standing reputation as a country of vocal music, there is also a keyboard tradition going back as far as Frescobaldi – and what better way of sampling 300 years of Italian keyboard music than with this new recording titled Italian Memories with pianist Mauro Bertoli?

Born in Brescia, Italy, Bertoli has established an international reputation within a fairly short time, having appeared in recital and as a soloist with numerous chamber ensembles and orchestras throughout the world. A recipient of the prestigious Giuseppe Sinopoli award in 2006, Bertoli has been artist-in-residence at Carleton University in Ottawa since 2009. Italian Memories is his fourth recording, and one that clearly brings him back to his roots.

The CD opens with four miniatures by three composers, Benedetto Marcello, Mattia Vento and Domenico Paradisi. Bertoli’s playing is elegant and poised, easily demonstrating how well music originally intended for harpsichord can sound on a concert grand. The name Muzio Clementi is a more familiar one – is there a piano student who hasn’t played music by this Italian-born composer who spent most of his life in England and whose reputation rivalled that of Haydn? The two sonatas presented here are a delight, and Bertoli makes ease of the sometimes breakneck speed required of the performer. A complete change of pace comes with two brief and languorous pieces by Martucci and the Diario Indiano by Ferruccio Busoni, an homage to Native American culture. The latter is a true study in contrasts where Bertoli’s wonderful sense of tonal colour is juxtaposed with a formidable technique.

The final work is a true tour de force, music not by an Italian but by the 12- year- old Franz Liszt – the Impromptu Brilliant on Themes by Rossini and Spontini. Here, both Liszt and Bertoli pull out all the stops in this flamboyant piece, thus rounding out a splendid program of music that deserves greater exposure.