My daughter said something to me last week that has had me thinking. She said that there’s been one very positive aspect to this world of suspended animation in which we’ve been living for almost a year now. And that was, she thought, that the virus has forced introspection upon us, forced us to slow down and disrupt our patterns of living, to scrutinize them with more care. For her it’s meant a serious career change, a new place to live, and a quite different attitude towards things – all very positive from her point of view.

My feeling has been almost the opposite – that we are so desperate to keep afloat these days, financially, socially and physically, that we haven’t had a minute to contemplate what the pandemic means on a larger scale. And what if it doesn’t mean anything? Perhaps it’s just something that happened, with no deeper implications.

It’s interesting to note, however, that back in the Middle Ages, when a similar pandemic roiled Europe, its meaning, for many, was extremely clear. God was punishing mankind for its sinfulness, and the Black Death was the result. That interpretation, almost universally held at the time, gave rise to many changes in thinking and attitude in the decades and centuries that followed. Indeed, some historians draw a straight line from the bubonic plague to the Protestant Reformation of a couple of hundred years later.

We live in a more secular age today, of course, so I’m not sure the prevailing currency on the meaning of the COVID virus centres around divine displeasure (although I’m certain there are many who think exactly as they thought in the 1300s). But it interests me that I haven’t yet come across any 21st-century equivalent explanations.

God knows there are plenty of explanations clamouring for consideration. That a pandemic that knows no boundaries is punishing a world that knows nothing but boundaries – of geography, nationalism, race, class, income, information, you name it. Or that in the battle between a borderless pandemic and a bordered world, the pandemic always wins. We could point out, if we wanted to, that our scientific rational world, the one that we love and trust so much, was destined to triumph in the development of vaccines that can save us, only to fail miserably in the more mundane activities of human distribution – of information, safety procedures, basic preparedness. 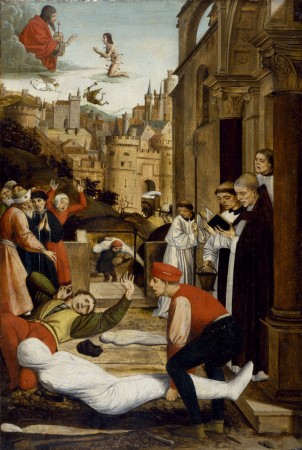 We could note that the response to the pandemic demonstrates, above all, our incapacity for planning and a deeply entrenched inability to deal with the exigencies of the world – a humbling revelation that is also deeply troubling. It’s as though we are living through the ramifications, dozens of centuries later, of the scattering of mankind that the story of Babel recounts.

The things I am noticing lately have more to do with the role of the arts in modern societies, and particularly the performing arts. On a purely practical level, I think it is just dawning on us that the performing arts may well be the hardest hit economic sector of any in society, of all of society when this is all said and done. Businesses are reopening in restricted ways – spottily, but deliberately. The airlines have been flying again; hotels are open. Even sports teams are resuming a form of activity. But the world of live performing arts is closed tight, without exception, and will remain that way at least until the fall of this year, maybe even longer. Even with the virtual events on offer, that’s a sector that essentially will have been completely shut down for more than 18 months, maybe closer to two years. Two years of virtually no activity whatsoever – a desert that is devastating on so many levels. And I have been wondering if, honestly, we care.

Well, they do in the Federal Republic of Germany, where pandemic aid to artists and arts organizations totals $54 billion so far! That’s not a misprint. We’re at maybe $500 million here in Canada, about one one-hundredth of that amount. What the German government has recognized is a truth valid everywhere in the world – that artists are notoriously precarious, vulnerable, living from gig to gig, lacking any security at all. They are among the most vulnerable workers in society, facing an industry that has been more devastated than any other – a blindingly catastrophic situation.

Now you can argue that the comparison between us and Germany is unfair, because they have a larger population, a longer history with the arts, a more prominent place in social life for artistic experience. But actually, none of these is especially true – they’re just two and a half times larger than us at 83 million, actually younger than us as a country by four years, and not quite as advanced artistically as you might think. I remember vividly interviewing the fine Argentinian pianist Ingrid Fliter when she was here a few years ago about whether she preferred performing for North American or European audiences. North American, her immediate response. Why, I asked? Because, she said, they are more attentive. And more knowledgeable. More knowledgeable! The idea of this vast mass of highly cultured Europeans lining up nightly for artistic events is something of a myth.

What the Germans do understand that we do not is that the point of artistic activity is to provide an imaginative framework for the creation of a nation, a people, a sensibility, a world. The arts there are not just a form of high-class entertainment, a perk for the upper-middle classes, a social event to demonstrate status. They are one of the means by which a nation defines itself, so protecting them is a national priority. I mentioned the story of Babel earlier, because one of the things I’ve been doing during the pandemic is, for the first time ever, reading the Bible carefully. I’m not doing so out of any new-found religious epiphany, but just out of a basic curiosity to find out what’s actually in the book. And what’s in the book are series of stories, like that of Babel, that act just like works of art do – that provide imaginative frameworks that define and influence our fundamental attitudes about the world.

This is a view of the power of art with which we struggle mightily in North America, especially in serious music. We can often see its validity here in the visual arts, or in literature. But our reliance on European forms of music-making, still, centuries later, really hampers our ability to use serious music to express ourselves completely in this country. Interestingly, it has been in popular music where this culture-defining role of the arts has been more obvious. And in Indigenous artistic activity, in which the power of the imagination to render justice, provide solace, create a future, expose hurt, re-engage a community, is on full display.

And occasionally, in other artistic endeavours, as with the finest moments of the recent Against the Grain Messiah/Complex. Listening to and watching Indigenous artists sing the spiritual music of one tradition against the explosive northern reality of another, we got just an inkling of how music might help us to create a new Canadian-ness, a differently imagined identity for ourselves. It was just a hint, a shadow, a fleeting moment of revelation, but that’s how the arts work. That is what they’re for.

Do I expect that we will be filled with this spirit of openness once our pandemic trials and tragedies are over? I can’t say that I do, but if even a bit of that blessing of interruption that my daughter was talking about becomes part of our new reality when this is done, we will be better for it. We have an opportunity; we should take it.