"There is an aspect to cultural work – or in our case, artistic ceremony – which does not align with current colonial reviewing practices. In order to encourage a deeper discussion of the work, we are inviting critiques or thoughts from IBPOC folks only. There is a specific lens that white settlers view cultural work through and at this time, we’re just not interested in bolstering that view, but rather the thoughts and views of fellow marginalized voices and in particular Indigenous women.”

Actor and playwright Yolanda Bonnell created quite a stir in Toronto arts circles in mid-February when she made the above statement, widely interpreted as a request that only Indigenous, black or other persons of colour be sent to review her show at Theatre Passe Muraille, bug. The play is a searing look at indigeneity and addiction, among other things, and Bonnell suggested that she felt, based on some previous experience, that critics from the dominant cultural group in society would be more likely to misrepresent her work in their reviews. She is not alone in this idea – many other Indigenous artists have been thinking along the same lines for some time. Bonnell also noted what she called the ceremonial aspects of bug, its role as a unifying rite for people who have suffered similar traumas to her own, a production style she did not feel jibed with the traditional expectations of a conventional review.

I’ve cycled through a surprising range of personal responses to Bonnell’s request – surprising to me, that is. And I’d like to share my thought processes about it, as a sort of confession of confusion around the deeply problematic issue of art and politics in our present age.

When I first read about Bonnell’s statement, I wasn’t especially alarmed. A bit surprised, but not alarmed. Reviewers have an enormous amount of power over artists and their productions, and in setting the limits of discourse around a work of art. A review is inherently an exercise of power. Why wouldn’t artists try to influence the exercise of that power, for whatever motivation? It’s true that the power of the mainstream review, in an era of disappearing arts sections in North American newspapers and a plethora of blogged, Instagrammed and Facebooked responses to arts events, has never been weaker. But it’s still there. Why not try to enjoin it? I could live with that.

Or so I thought.

But then I realized, or was honest enough to admit to myself, that I am one of the people Bonnell was targeting in her request. (And it was a request, not a demand, it’s important to note.) I’m a mainstream critic who is neither Indigenous, black or a person of colour. In effect, therefore, Bonnell was telling me that she didn’t want me to review her show, because she didn’t think I could do so responsibly. And that hurt me, and made me angry. Surprisingly so.

Why, I wondered? At first, I said to myself, this is offensive: I’m a professional reviewer – art is art, even ceremonial art, and I’ve been trained to separate out my personal biases from my professional opinion of it, and I resent the implication that I cannot – a nice argument, except that we now understand, or should, that this notion of a politically neutral “art” is a form of bias all of its own – that art is inherently political. Especially within classical music, my usual critical stamping grounds, this dispute between art as cultural meaning and art as pure form has been fought for decades, mainly in the academy, around discussions about the new, politically conscious musicology. And the new musicology has won, by and large. And rightly so. My taking umbrage at being accused of potential professional critical incompetence was a bit disingenuous.

Then, I surprised myself even more by turning petulant. “I know several people of colour” I protested to an absent Yolanda Bonnell, “who would be considerably less sympathetic to bug than I would be. Why do you assume that my sympathies wouldn’t be with you?” In asking the question, I had to laugh at myself. Because I full well knew the answer, like it or not. The answer is that Indigenous people have been watching our “settler colonial” behaviour with great care in this country for the past 400 years. We haven’t acquitted ourselves well in the past; there’s no reason to think we will now. I don’t like that answer very much – no one likes to be stereotyped – but it’s hard to argue with it, if I’m being honest. So the fact that I was not being sought out for my views can’t really be the root of my anger either.

Here, I confess, is what I think is the real reason for my personal reaction. I think, in the end, I realized that I couldn’t bear to absorb, in even the mildest possible dose, this tiny, tiny check on my autonomy – absurdly tiny – having to deal with the suggestion that I wasn’t welcome to review a work of theatre. It was infuriating to me. And I was a bit ashamed to realize that. More than a bit ashamed. I realized that privilege, and the assumption of privilege takes many forms, and is very insidious. It’s not just about the imposition of an inherited cultural framework – it’s about the assumption that everything in my world should be open to me, that I had the right to be and go anywhere I choose. To understand that there are things that aren’t for me, or about me, was a lesson it was about time I learned.

So, I can understand and fully endorse Bonnell’s initiative to create a supportive mental and emotional infrastructure for works of art that are harrowing, and vulnerable, and open to being misunderstood. But that’s not quite the end of the story for me. Because, as much as I can sympathize with the reasoning behind Bonnell’s statement, I worry about it becoming the default position in the relationship of mainstream audiences and non-mainstream art, or to put it more baldly, (perhaps too much so), the relationship between the audience of the oppressors and the art of the oppressed. Art is a vehicle for celebrating many aspects of humanity: from forming community among people of like experience (one of the stated goals of bug), to allowing different points of view a vehicle for expression, to providing forms of entertainment. Above all, art is primarily a vehicle for the liberation of the imagination – the imagination not just of the artists making the art, but the imaginative landscape of the audiences absorbing it, reflecting upon it, eventually critically reviewing it. If Bonnell’s statement (and others like it) are simply making a plea for, and an argument about, the expansion of the cultural diversity of arts reviewers, I, for one, am not going to argue with her. 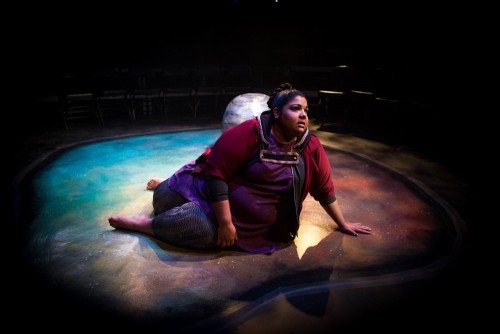 But there is another point at play here as well, I think. Art is at its most valuable in its ability to disturb preconceived notions, to expand the emotional and imaginative range of people stuck in a depressing sameness of mental and cultural viewpoints, to jiggle and jostle and storm the bastions of hatred and prejudice and limits – limits of empathy, limits of understanding. That is the most important work we have for ourselves these days in our complex, multivalent society. And it is work that art is uniquely positioned to do.

It might be unfair to impose on Yolanda Bonnell the expectation, even the demand, that bug radically alter the perception of people who might otherwise be ignorant of, and unintentionally diffident about, the circumstances that gave rise to her art. In fact, she has done a great deal of that work already by simply making her statement and taking the stand she did, to considerable personal hostility, as she has reported. Eventually, we need to find a way to create a landscape of equivalence and equality, of righteousness, to use a very old-fashioned word, in our society. Exclusion cannot be a permanent vehicle to get to that hoped-for state. But Bonnell and her creative team, in a very courageous way, have helped all of us begin to understand what exclusion is, the many levels on which it operates, and the hurt it occasions. For that, we should give her sincere thanks.