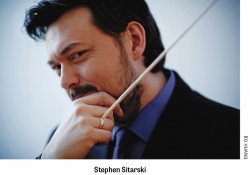 As the name Performing Arts Medicine Association (PAMA) suggests, this is an organization composed of health care professionals and performing artists dedicated to the treatment and prevention of the various occupational health hazards to which performing artists, including musicians and dancers, are particularly vulnerable. While performing artists do not have a monopoly on any of these physical and psychological problems, they are prevalent enough for artists’ health to be a focus for health care.

According to Dr. John Chong, the medical director of the Musicians’ Clinics of Canada, professor in the Faculty of Health Sciences at McMaster University and a past president and treasurer, Performing Arts Medicine Association, the risk factors for the development of some sort of problem over the lifetime of a performing artist are a whopping 84 percent, triple the national average.

The theme of the February 11-12 conference was the pressure on performers to conceal their physical injuries and psychological stressors until they are at a critical point of no return. The aim of the conference, as I understood it, was educational. According to the PAMA website’s description of the event: “The more this issue is brought to light, the earlier artists can seek treatment, and the better their chances are of full recovery.” The site goes on to say that “prominent performers will share their stories of health challenges concealed and revealed, and pioneers in the field of Performance Health will add their clinical and research wisdom.”

The well-known Canadian violinist, Stephen Sitarski, at one time the concertmaster of the Kitchener-Waterloo Symphony Orchestra, speaking from his own experience, gave what could have been the keynote speech, a comprehensive look at everything from the psychological profile of a performing artist to the various stresses to which artists are subject.

According to Sitarski there is a fundamental contradiction between what motivates musicians to dedicate years of focused work to become good enough to perform professionally and the workplace and working conditions they find themselves in. The motivation is centred around the development of the artist’s voice, his/her authentic individuality and its expression. The workplace, especially symphony orchestras, where the conductor’s authority is more or less absolute, of course, demands the subjugation of the individual artist’s expression to the artistic vision of the conductor. But there are other stresses as well, not the least of which is the demand to be sufficiently employed to be able to make a living. For many local musicians this involves being part of what Sitarski called “the 401 Philharmonic,” necessitating long trips along the 401 to destinations anywhere from Windsor to Kingston, performing late into the evening, driving home even later and getting up early the next morning to get to a morning rehearsal, followed by another evening performance. As one of the other speakers, Andrew Cash, a former musician himself and now a member of Parliament, put it just a few hours later, “The arts can be a great way to get rich but a terrible way to make a living.” This arduous and bleak routine – the essence of which is the loss of control and independence and the suppression of everything he had become a musician to express – eventually led Sitarski in the direction of depression and burnout. Fortunately Dr. John Chong was there and with his help Sitarski was able to find his way back to a better frame of mind and make adjustments to his professional life.

Variants of Sitarski’s story were told by several of the other speakers. Lol Tolhurst, formerly of the rock band The Cure, spoke of his experience of what he called “maladies of the spirit”; and cellist, Bryan Epperson, spoke of his struggles with similar experiences.

Some of the medical professionals were able to shed some light on the reasons for these sorts of problems. Lynda Mainwaring, a U of T psychology professor specializing in performance, health and rehabilitation psychology, characterized burnout as the result of both the chronic mismatch of you and your workplace and a lack of recognition; stress as the absence of connectivity; and engagement as the opposite of burnout. Jennie Morton, psychologist, osteopath and author of The Authentic Performer, told us that her research had led to the discovery that creative people have fewer dopamine receptors, which tends to make them more vulnerable to stress. She also connected these sorts of maladies of the spirit with a confusion of the artist’s authentic identity with his/her identity as a performer. Cash linked the artistic temperament, in particular the fact that artists by definition are not joiners, to the chronic shortage of money which plagues many musicians. In fact, early in the day some income statistics were presented and as I recall, the average annual income of musicians in this country is around $16,000. Musician and songwriter, Tom Wilson, made a connection between addiction, which came up repeatedly over the course of the day, and the rigours of the artistic life: “Addiction comes from trying to survive.” He also brought us a musicians’ joke, which provided an element of “folk wisdom”: Q. What would a musician do if he won a million dollars? A. He’d keep playing until he ran out of money.”

This conference raised a couple of questions and concerns for me: one was that there are musicians who do not suffer the afflictions explored over the course of the day. What are they doing right, so to speak, which some of their colleagues are doing wrong? Also, it came up a couple of times over the course of the day that doctors trying to help performers with depression and burnout sometimes prescribe anti-depressants, and one or two people who spoke about this approach told us that they would be taking these prescription drugs as long as they lived. While admittedly not ideal, a “managed addiction” (to anti-depressants) is better than chronic depression.

This brings me to the PAMA’s upcoming international symposium June 29 to July 2 in Snowmass, Colorado. Among the many topics being addressed at this event are the following two: “...the risks, benefits and side effects of opioid management for pain” and “... non-medication pain management options.”

The problems discussed at this conference are real, and it is better to address them than not, as the consequences of not addressing them can be dire.

If you or someone you know is suffering from the sorts of issues raised here, Dr. Chong recommends getting a referral to the Musicians’ Clinics of Canada from a family physician. The clinic has offices in both Toronto and Hamilton. Information about them is readily available at their website: musiciansclinics.com. The Performing Arts Medicine Association’s address is artsmed.org.

Allan Pulker, flutist, is co-founder and chairman of the board of The WholeNote.